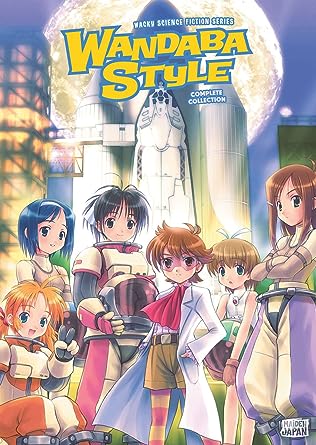 Once again, it’s that time where we at Anime Discovery actually looks at titles that are very, very obscure at this point. Like, this is a title that’s from 2003. Yes, even though the copyright date in 2002, it did air in the Spring 2003 season.

I mean, I guess anime fans older than me must have heard of this title and if you’re wondering how and why I got my hands on this….. yeah, that goes to buying Blind Boxes at Rightstuf.com as you’ll never know what anime DVDs from now defunct anime distributors you’ll get. Hell, I now own a volume of the Geneon release of Ergo Proxy and a LE Collector’s Box Vol. 1 set of Heat Guy J.

But yes, this relic from a decade ago is getting the MAK treatment here and from what I saw in previews, this looks like some ol’ fashioned crazy-ass anime shit around here. Let’s take a look.

Dr. Susumu Tsukumo isn’t your typical mad scientist. First, he’s only 14 years old, and second, he’s firmly convinced that the moon landings never happened. He intends to fix that, however, just as soon as he can find some human guinea pigs to test out his highly-unorthodox, but environmentally-friendly, methods for getting people into space without using fossil fuels. He has one problem: where do you find someone who’s crazy enough to let a kid launch them into orbit? Enter Michael Hanagata, manager of MIX JUICE, a struggling girl band that’s so desperate for a break that they’ll do just about anything to be seen. Do they really mean… anything? Get ready to blast off with former child-star Sakura, tough-as-nails rocker Yuri, construction worker Himawari, and folk singer Ayame as they attempt to go from the Earth to the Moon with a little WANDABA STYLE!

I’ll say this: Yep, this is definitely some wacky hi-jinks we’re getting into considering we’re throwing in idols, sci-fi, space travel but this time, doing it eco-friendly and less Elon Musk-y and yet this sounds like something I should or would like if I got my hands of something like this back in the 2000s and….. yeah, this is something my teenage self would have watched a lot.

A 14-year-old mad scientist that has his own android that’s a little cute moe girl with more pretty girls in a girl group that’s looking to make it big by any means necessary. It makes a wild show. Even wilder considering their manager, who is the show stealer here and I admit he is very hilarious as he gets into these random situations. The girls have very distinct and quirky personalities to them, if not some that might be a bit typical like Sakura is the bratty former child star, Ayame has this folk singer personality that sees ‘fairies’….. yeah, let’s go with ‘fairies’, Yuri is the tough girl and Himawari is the balladeer, who’s also a part-time construction worker and also the most distinct out of the girls and actually my favorite of the group.

There’s Tsukumo, and he has the basic characteristics of a mad scientist but 14 — way focused on his work, very determined as well, and don’t know a damn thing about girls. He’s probably the least interesting character in the show in my eyes and that whole backstory about him and his family almost had me invested in it but near the end of the episode, I got back to not giving a fuck.

I know, I know, I shouldn’t expect character development in a show like this but expect me to care about one of your center characters and what you did in that episode didn’t made me say “Wow, I suddenly give a fuck about you!”. That just went, “Yeah, I’m just here for the lols and WTFuckery!”

Speaking of lols, this is the earliest work of animation studio TNK, the ones responsible for anime like ….. High School DXD (the first 3 seasons of it) and…… School Days. I can also see why this would get overlooked and the result is the art looks like the zany anime that actually got more attention back then. Yeah, I got an Excel Saga/Puni Puni Poemy vibe whenever I notice the designs, the animation, etc. It’s not ripping those shows off but that style was influential in its day.

The opening and ending songs for the series has this ’50-60s surf music vibe and I get for those who like it will enjoy me but it isn’t my taste to be honest. In the score, it’s light-hearted and poppy with some DJ scratches in there to match the tone of the show. Of course, we got the English dub from ADV Films and if you know their dubs at the time, you know people like Tiffany Grant, Luci Christian, Hilary Haag, Kira Vincent-Davis, Nancy Novotny and especially Monica Rial are very present and they deliver solid performances and even though I didn’t care for this character, Grant as Tsukumo was unrecognizable and Jason Douglas as Michael Hanagata…..again, a show-stealer of the show.

FINAL VERDICT: Wandaba Style is what you expected out of a show like this in the early 2000s. It’s wacky, chaotic, colorful and guarantees you that you’ll have some fun with this. That being said, it’s not going to be the higher echelon of chaotic, wacky-styled anime like FLCL, Kill La Kill or even Excel Saga but it’s worth a look into.

WANDABA STYLE is available on DVD via Maiden Japan. It was previously available via ADV Films and it’s currently streaming on HiDive.