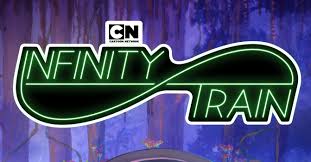 Well, well, well…… coming back to this one.

Yeah, it was 3 years ago….at least from that date that I talked about a pilot that aired on Cartoon Network…. or at least on its Youtube page. Yes, that pilot is Infinity Train and just after its pilot aired, it did get a series pick-up from CN and I, like many others, were very pleased about it and of course, we had to wait……for 3 years.

That’s not a complaint. CN was still garnering some fantastic new shows like Craig of the Creek, Summer Camp Island, Victor and Valentino, Mao Mao among others and some shows were ending (well, ended in Adventure Time‘s case) or preparing for something even bigger (that being Steven Universe and maybe We Bare Bears) and that’s the perfect time to show something new to the scene.

Now, I already said that this is created by Owen Dennis, most known him for being a writer and story-boarder from Regular Show and here’s another catch to this….. this is a mini-series.

10 episodes. Running the 15-minute format. Basically 2 full hours of this.

And don’t forget. We had a great miniseries that ran on Cartoon Network from somebody formerly of a well-known CN show and this could easily be that as well.

The show follows 12-year-old Tulip and her two-in-one robot companion One-One in their journey through a seemingly infinite train with limitless possibilities that is traveling through a completely barren wasteland. They are joined by Atticus, an intelligent, talking Corgi and king of a Corgi kingdom in one of the train’s cars, as they search for a way to Tulip’s home.

OK, it’s a no brainer that we know a lot more about Tulip outside of the pilot, like she wants to be a video game designer and was to attend camp for it and there’s also the strained relationship with her parents as she is a child of divorce, so you know things like that will come up here.

I remember saying that I was into this concept of going through these different train cars in order to get out of there with the numbers embedded in her hand and to see being a series….. OK, it being a mini-series makes sense now because you got to have an end with something like this and once again, being a 10-episode, 15-minute format helps it more. We learn about what mysterious train cars we enter like Corginia, the train car utopia full of corgis (and every dog lover just passed out from the doggos they saw) to the one with turtles with everything being unfinished and even a train of chrome with mirrors and how your reflection can act different…..which made me wonder about my own reflection. *looks into mirror*

Tulip makes up to be an endearing protagonist and I think most people knew coming in this that they would show her past memories along with what would lead up to her parents’ divorce. While I did expect something out of that, the parts around that was still intriguing. More intriguing parts are the mysterious Conductor of the train and their identity at the end of this and its cast of characters like The Cat….. no, that’s basically what the show lists her as and yes, she’s a cat. A shady one at that. One-One and Atticus make great highlights as characters with the duo personality of the former — one being upbeat and positive and the other being pessimistic and morose as a motherfucker and the latter being a royal talking corgi….. I don’t think I need to explain the latter much, it’s a talking corgi. Internet loves corgis.

The voice cast itself is pretty impressive especially with Ashley Johnson as the lead girl Tulip as I loved her performance here and then you have both Jeremy Crutchley and creator Owen Dennis doing One-One, the former being Glad and the latter Sad and on Dennis’ performance as Sad-One, I’m getting like a Peter Lorre but on drugs vibe from him. You also get some well-known character actors in here like Ernie Hudson as Atticus and Kate Mulgrew as The Cat. There’s also one special appearance playing a special character……but I’m letting you figure that out yourselves.

FINAL VERDICT: Yeah, this show is just awesome! It’s got an unique premise with some weird ideas and a bit of the expected from what we know about the MC pre-hand but still it makes up to be a stellar adventure and while I said it was a mini-series, after it ended, they will be more so this isn’t a one-and-done deal and could continue with another character. I’m glad CN got another gem in their hands with some more adventurous tones to it.