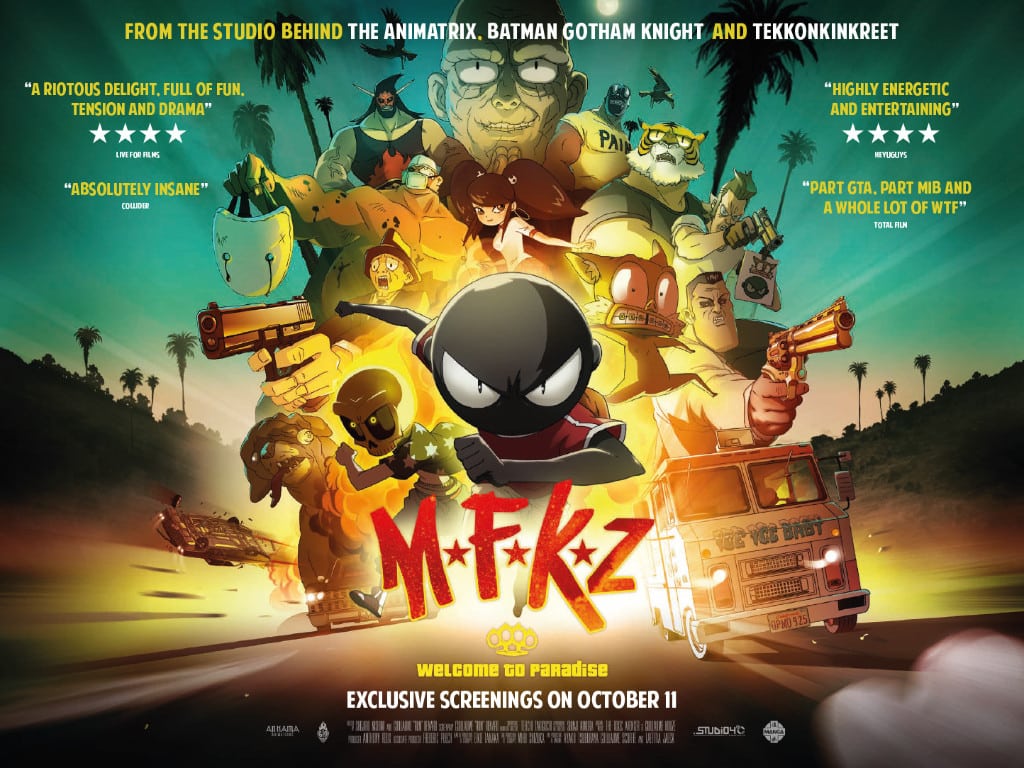 When I saw the trailer to this, I immediately knew that this would be something I would be hyped for seeing.

But first, some back info.

This is based off a French comic called Mutafukaz created by Guillaume “Run” Renard, published in English by Titan Comics with only one volume. And yes, the original title of this is Mutafukaz aka something you can’t use for a movie title in the States, although you know this isn’t for kids.

This is also a French-Japanese production between Studio 4°C and Ankama Animations, the latter you’ve known for the animated series Wakfu – you know that one show that had a KickStarter, thought we would get a dub from what the trailer showed us but didn’t…. although the third season got a better dub from what I heard. Yeah, I donated to that Kickstarter a few years ago and got the series sitting on my shelf…. Yeah, I haven’t touch it since. Someday…….

But now, let’s get into this particular title here……

The film centers on young Angelino and his skull-and-flame pal Vinz, who live in a seedy tenement in an LA-inspired dystopian metropolis – a burnt-out, gang and cockroach-ridden neo-urban hell that makes Blade Runner’s LA seem like The Brady Bunch. Following a scooter accident Angelino starts experiencing migraines and strange hallucinations, as well as fits of rage-inspired superpowers, as he slowly awakens to the truth of his origins: he is half human and half Macho, a supernatural alien race that is bent on taking over the planet.

Again, something about this just fits within my aesthetic. A blend of sci-fi, anime, hip-hop, gang culture and film noir all into one package and I was definitely loving what I saw through the 94 minute run. It is one of these stories where the protagonist has this weird origin about them that comes up back again and puts him and his friends in peril, especially in a place like DMC (Dark Meat City) and it is a rough-ass city that will find ways to mess you up.

I do dig the plot here although some elements thrown in there baffled me like midway into the film going to the third act and while I want to reiterate that I absolutely liked this movie, but when we discover the Macho’s plan for the Earth….. my first thought is “Huh? Really? That’s why you’re planning to invade the Earth?” I mean, doing that shit today would seem effortless but yeah, the plot is solid with a messy third act and all.

But, it’s the characters that got me into the movie from the main character Angelino and his friend Vinz, living together in pretty much a shithole apartment and trying to make ends meet along with crushing on a girl he always sees (who can blame him? she has a good design on her) and speaking of the girl, while Luna does have a central part to the story, her utilization is just merely “mysterious girl that MC got a crush on” and yeah, that’s it. The main antagonist Bruce is quite a force and Agent Crocodille, one of the MiB guys chasing our duo, is….. well, your secondary antagonist.

I do like Angelino and Vinz a lot, they are very relatable in how they’re trying to live and I like their camaraderie on-screen and yeah, while they have Willy here and there, I didn’t care too much about Willy to be honest. Hell when it came to the gangs, one of them led by Shakespeare (aka Popeye in the French language version), I was more enthralled in that.

The animation, the artwork, the character designs are very unique in their own way and Studio 4°C always delivered on unique animation although this time, they are with Ankama Animations, so they can share the credit on how visually impressive it looks and how they capture the feel of the inner city, the rough neighborhoods, the action sequences…. I was very enamored on how the animation delivered.

Next up is the music and if you know me for the past few years I’ve been reviewing….. well, stuff….. I always have a fondness for hip-hop and this is one gritty action electronic hip-hop score from Guillaume Houzé and French DJ/songwriter/producer The Toxic Avenger. You also find a mix of some reggaeton added in there, mainly the ending song.

Now while this has a French dub that has French rap duo Casseurs Flowters being the voices of Angelino and Vinz, respectively and I would comment on that except that I didn’t watched that version and I don’t speak French, so I can’t judge on their voice-acting. I can look at the English dub and this is not like any other anime dub since this features some well-known character actors and even some big names on here like Danny Trejo, Michael Chiklis, Giancarlo Esposito, The RZA among others. The biggest being rapper Vince Staples as Vinz and he did great with how that character can be from being scared and cautious in this shit he’s in and that subject has always been in his music and plus, I can tell his voice as in a higher register than usual because I would Vince in Lazor Wulf easily in his regular voice (Also watch Lazor Wulf, that show is awesome!) and in here, he got a different slight in his voice. Another voice here, one that isn’t as advertised as much is the voice of Angelino being Kenn Michael and I liked his portrayal of Angelino very well and he does have that recognizable voice to him like I heard this guy before……and I did if you played Saints Row or watched As Told by Ginger.

FINAL VERDICT: This is a very frenetic, stylish, gonzo, crazy-ass movie that most people might pass on but that’s on them. This is the type of shit that I will go for, the aesthetic just fits so well into not only my entertainment zone but something in my creative/inspiration zone as well. It may get messy near the end but overall, it was an amazing fun ride and I’m so glad to own this on Blu-ray. If you’re someone that likes your fusion of anime, hip-hop, sci-fi, lucha wrestling, whatever fits in there…. I guarantee you will have a good time with this.

MFKZ is available on Blu-ray/DVD/Digital by GKIDS via Universal Pictures Home Entertainment. You can legally stream this on YouTube, Amazon Prime and Google Play for $3.99.

I’m MAK2.0 aka The Blue Hybrid and I’m glad I don’t live with those motherfuckers.