So…… I haven’t did something like this in a while and by something, I meant cover a title I hadn’t know much about until now.

However, me discovering this isn’t due to general curiosity. It’s more of ‘I got this from a Blind Box from Rightstuf that was in the $10 tier but it was only $3.14 (minus shipping) because of a Pi Day sale’ situation. Yes, that was a very specific detail.

But since I have this (at least for now), I figured that I could peep this for a while. Thankfully it’s a short series with 12 episodes plus an OVA and plus, it’s been about 10 years (11 in the coming fall season of this year) since it debuted on Japanese TV. Hell, this aired before the dawn of– *searches when Crunchyroll was founded*– well, it debuted at the time when anime didn’t have same-day simulcasting or many streaming services to watch everything.

Let’s take a look at this title…..oh, in English, it’s called The Hill Dyed Rose Madder. Well, it’s less wordy than its Japanese title but I’m still calling it AkaSaka.

One day Junichi Nagase comes across two boys tormenting Yuuhi Katagiri. When he steps in to help they run off calling him “Geno Killer”. He then walks off without introducing himself or allowing the girl to either. The next day to both of their surprise she is introduced as a new transfer student to his class. The following day due to a misunderstanding he kisses her which greatly upsets her. That evening to his surprise and dismay she shows up to his door saying she is his fiancée and that she has come to live with him to evaluate him to see if he is worthy of her. Much hi-jinx ensues as the days go by.

Well, I’d be pissed if I were to pay $20-49 more dollars for this when this was actually on sale but since I didn’t, I’m good on being mad….. however, wow, this shit is dated as fuck. Yes, I know this comes from 2008 so calling it that is a “no-shit Sherlock” on me but even at that time, this had the basic romance bullshit from anime older than this one!

It’s boy meets girl while saving her from thugs while he’s known to be a delinquent or some shit and then suddenly, him and her are engaged…..

The bigger aspect of this is basically if Junichi is worthy of being Yuuhi’s husband and this whole ‘will they, won’t they’ is annoying. It’s just them bickering, arguing, being catty and some another anime romance shitty tropes that gets stale throughout.

Yeah, weirder stuff like going in some haunted mansion or seeing Junichi’s parents being secret agents/action heroes happens here and there but I really didn’t care. Granted, I wish that could’ve been an anime I was reviewing instead of this but those moments where it’s supposed to be funny…..didn’t feel like that. It felt so forced in there so you’ll have something in between the serious ‘dramatic’ parts of this.

Characters in here are 3 modes: bland, archetypal and annoying. Junichi being the main character that is supposed to be this dangerous guy. I mean, he’s nicknamed the “Geno Killer”….yeah, I was not buying that shit afterwards and his personality is as flavorless as unseasoned chicken. Yuuhi is the typical character type that gets mad and befuddled easily after the first episode with him about countless things and as usual, she’s the wishy-washy type and yeah, I don’t like either MC. Oh, and there’s the little sister (mainly Junichi’s little sister) Minato and she’s kind, does the housework, cares for her brother deeply and….. you know where this is headed, right?

I could go on about every other character but why? You got the annoying best friend, the cast of school girls that either close to Junichi, friends with Minato and/or Yuuhi, strange adults and yeah, I definitely don’t care for anyone here.

Oh, and if you’re just watching this for the fan service, well…..it’s weak in that department as well. Except for that OVA in there, you might as well just watch that if all of you want is that. In fact, I don’t blame you because everything about this anime is the three Bad B’s: Basic, Boring and Blase. 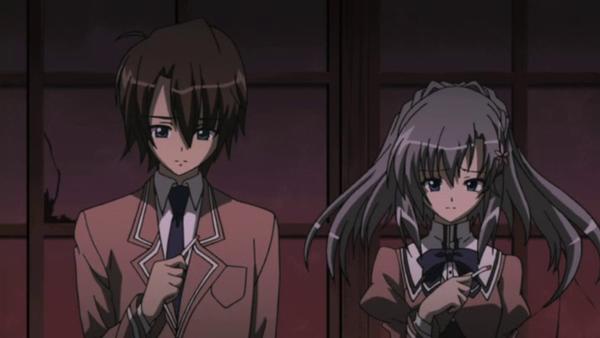 You know what, I’m just going to go straight to the final verdict because the animation and music is nothing notable to talk about. Yeah, they got multiple ED songs but none that stand out, TNK’s animation is about the same like you seen in their other show around that time School Days and yes, there is no English dub to this and I know Sentai does go back and dub some of their previously sub-only releases but I doubt if anyone is pleading for a Dub to this show. Maybe there might be some small group of people loving this and want to see this in English but as of now, it’s nowhere on anyone’s radar.

FINAL VERDICT: AkaSaka is the anime equivalent of those bargain-bin movies you get at Wal-Mart for $4 (or $8 if they’re Blu-ray). Again, I’d be pissed if I exactly dropped major cash on this but I felt like I actually paid for what it’s exactly worth. It’s a cliche-written mess with a bunch of hi-jinks that gets stale quickly with characters not worthwhile to give a damn and too irritating. But even if I got it on the cheap, just skip this.

AKASAKA is on sub-only DVD via Sentai Filmworks. Streaming-wise, it’s on Hulu & HiDive.