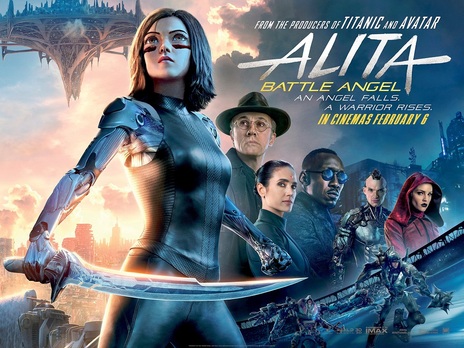 Set several centuries in the future, the abandoned Alita is found in the scrapyard of Iron City by Ido, a compassionate cyber-doctor who takes the unconscious cyborg Alita to his clinic. When Alita awakens, she has no memory of who she is, nor does she have any recognition of the world she finds herself in. As Alita learns to navigate her new life and the treacherous streets of Iron City, Ido tries to shield her from her mysterious past.

So, I remember watching the OVA several years ago and even reviewed it before and even read a bit of the manga and I really liked what I saw from both material and thankfully I got more out of the manga while the OVA is just 2 episodes. Now hearing about the live-action movie and how James Cameron got the rights to make that happen with the tech he used for Avatar and that became a huge hit… well, huge and pretty much left the social conscious after 2010 and all we heard from him doing the sequel to Avatar… and it’s 2019.  Anyway, on the BAA movie, Cameron decides to produce and write the movie while handling the direction to one Robert Rodriguez.

I admit that at this point, I wasn’t all that hot on Rodriguez. I liked movies like Sin City, From Dusk ’til Dawn and maybe the first two Spy Kids movies (hey, I was 12 at the time, shut up!) but most of his shit isn’t hitting it for me and I was worried about him directing this. Then again, we got some good casting in here like the lead Rosa Salazar, Christoph Waltz being Ido, Mahershala Ali playing the big bad Vector. But….. after the disasters that are Death Note and especially the Ghost in the Shell movie, how is this?

Well…. it’s good. It is actually a good movie. I’m not going to say that it’s the best movie overall but when it comes to anime/manga adaptations, it’s definitely close to the original source and well….. hey, it’s not Ghost in the Shell. Like, I usually don’t want to be that guy that always says that it has to be the manga or anime shot-to-shot but watching this, I definitely got some instances remembering the anime and manga from the cities, the dirty surroundings, the cyborgs, the overall atmosphere seeing it. It’s not wholly dependent on them with a few changes in the story here and there….so just like the OVA then. Also, it’s less bloody because there was some bloody kills in the OVA and yet I’m fine with no blood.

I will say the focus on Alita and Ido worked well here and I like the performances from Rosa Salazar and Christoph Waltz and what that got on Yugo (or Hugo) played by Keean Johnson was alright. There was more explained in the other versions and the romance in here between him and Alita is laid on thick. Not complaining here but it’s definitely notable here.

Jennifer Connelly as Chiren aka the character that was only in the OVA was….. well, she was there and in some pivotal scenes but yeah, that’s all I got from her and Mahershala Ali as Vector was typical businessman villain. I didn’t recognize that was Jackie Earle Haley as Grewishka until I got a good look at him and Ed Skrein as Zapan…..Welp, he’s basically a pretty boy hunter.

Oh and I want to mention this right now….. I never had a problem with Alita’s eyes in the first place. OK, Yes, I know they are big but…..looking at the rest of the world with weird-ass looking cyborgs, monsters and shit, her eyes are a farcry from uncanny valley. The action here is shot great and very eye-catching and exhilarating and I know that’ll hook some people in….. but that might be the people that are anime/manga-centric……some outside that might be skeptical of this, at least those are my thoughts on it.

I do think it’s disheartening knowing that this film may not make back its budget and I’m not going to spoil anything but like I said, if you know the source material of this, you know they are doing some sequel-baiting stuff with this and yeah… I don’t see it happening as much as how good I think it is.

But yes, Alita Battle Angel is definitely a right step in the direction of live-action anime/manga adaptations. The story may be spread thin (at least to some that’s unfamiliar with this) to some but it’s a fun and adventurous movie with a captivating lead with some impressive action.

Yes, sir, I think there’s going to be some good happening with– *sees the plot synopsis for the live action YOUR NAME movie* — Well, shit.

I’m MAK2.0 aka The Blue Hybrid and can y’all hire me to direct a live action BLACK LAGOON? Or at least re-do (or continue) the anime GANGSTA.?