So this has a lot to do with manga today. Then again, we know this show to go weeb here and I welcome it. Oh, and also tunnels. There’s something about tunnels and…. OK, let’s just get on with the synopsis.

The Bears discover a network of tunnels underneath the cave. Are they prepared to discover where they lead to and who dug them?

So Panda was reading his favorite manga Adventure Ocelot (I’m guessing it’s a mix of Indiana Jones and a cat girl) and he apparently has a lot of chapters of that series and he binges them a lot. (It might as big as One Piece). Anyway, Grizz walks in and decides to check an issue out but as any manga enthusiast will say, you have to read it from the beginning but the first chapter is missing.

Grizz suggest Panda misplaced it under the beg but finds out he has a big-ass hole under there and the cave is about to cave it as a bunch of shit fell down, including his manga. Ice Bear with his trusty ax decides to go down there and see what’s down there…..and the rope got cut. He’s doomed. End cred– OK, I’ll stop. Grizz and Panda go down there to investigate and find Ice Bear.

He found his manga but they also found….. moles!!!! Cute little moles and yes, Panda say they were cute but also ugly. 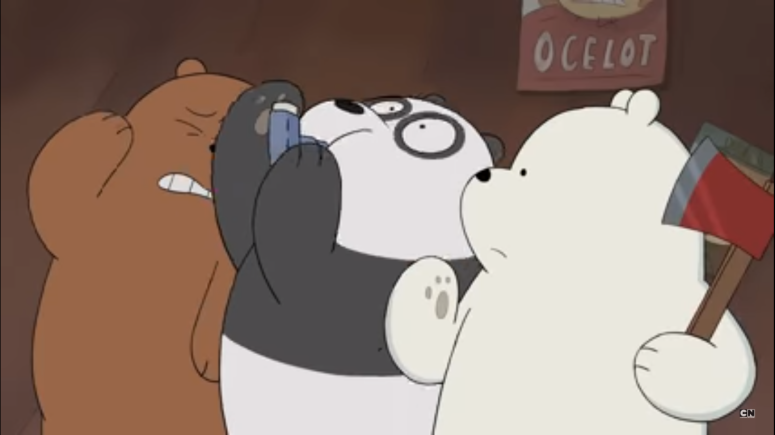 But more trouble ensues as the cave is about to crush them and they need something to keep it from falling…..aka them manga. But Panda does not want to sacrifice any of his shit but one knock on the head and a visit from Dr. Ocelot got him to thinking of what a hero would do in that situation and yes, he did use them books to fix the cave from collapsing.

He did buy some new paperbacks tho. I would’ve said “Go Digital” but I do not want to piss off the “Physical or Die” crowd.

FINAL VERDICT: ‘Tis the standard basic episode with some weeb flavor and cute moles!! But yeah, I would watch it again on most days.

I’m MAK2.0 aka The Blue Hybrid and good thing Adventure Ocelot doesn’t have an anime adaptation. Again, that might be as long as One Piece.