CHRISTMAS TIME is UPON US!!!! And that—- also means I forgot to find out that WBB has another episode coming up.

And talk about timing today with me just seen Into The Spider-verse today (it was awesome, BTW!) and Steven Universe coming back today, I forgot all about WBB having an episode today and a Christmas-themed one… well, another Christmas-themed one and hey, it’s one about the Baby Bears.

Which makes some sense. Older bears got one, Chloe (featuring Ice Bear) had one and now the younger bears get one.

On Christmas Eve, the Baby Bears are working at Last Weekend Video and stay the night when the owner locks up. A thief named Harry (David Hornsby) breaks in posing as Santa to rob the place, but the Baby Bears see through his disguise and try to apprehend him.

So, back in their earlier days, the bears were working at a video store….yes, video store. Remember those? Anyway, they’re enjoying their time there, helping out the owner and customers, which does get that heart-warming feel to the season. But, there’s some thieving dude that arrived there named Harry. No joke, the first thing he do is steal some kids’ candy canes and a little girl’s stuffed walrus…..and he keeps on stealing shit!

Hell, he asked what time they close and even laughed as he left. Of course, the dude is going to rob the place.

Meanwhile, the bears were busy watching a lot of Holiday movies and snacking as well but they get a surprise visit and it’s SANTA CLAUS…. if the motherfucker went on a weight-loss program the past 11 months and– yeah, it’s Harry. He got the bears to fill his sack (a real burlap sack BTW!) with movies and as he plan to leave, he got found out.

They tried to stop him with the usual tricks and gags and all that. Some plans gone awry as they tried to call the cops and they get caught by Harry.

Of course you get the jist of this is that Harry doesn’t believe in the spirit of Christmas and looking out for himself but Grizz does drop some XMAS goodwill shit on him, remembering the good Christmas times he had and reflecting on how he had some happy holidays before and now that he sees he made some bad choices, what can he do?

Well, he volunteered to help out as their store Santa and everything was hunky-dory……except that Panda revealed that the guy tried to rob them to the manager.
I’m betting they’re fired now. 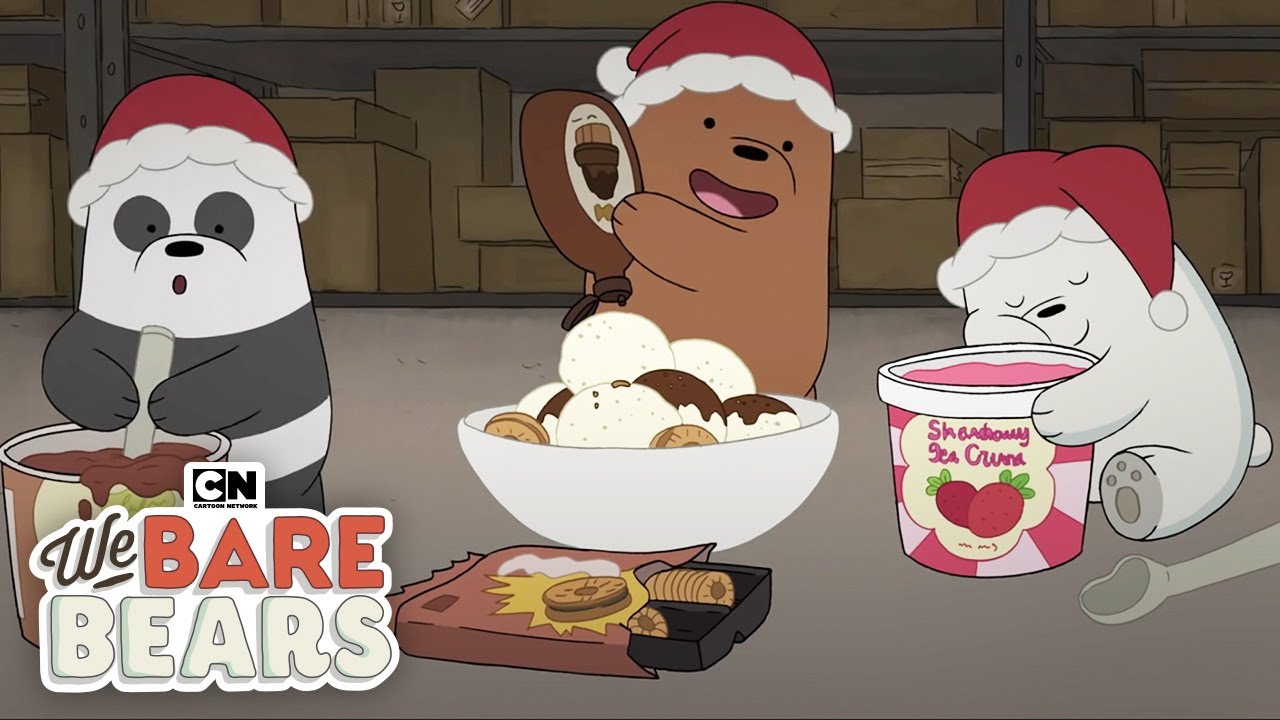 FINAL VERDICT: Hmmmm……OK, it was a bit typical of making the bad guy not such one near the end but it still had some genuine heart to it. Oh, and you’ll notice some early easter eggs in there like Grizz’ infatuation with movies continuing and also the bears eating hot dogs (well, Grizz and Ice Bear while Panda eats a carrot with some other veggies in there) Maybe not one I immediately go back to but this episode is pretty OK.

I’m MAK2.0 aka The Blue Hybrid and yeah, they are so fired. HAPPY HOLIDAYS!!!!