“Hey, dude, we should make a band for a pizza place.” – We Bare Bears.

Hey, we was overdue for a WBB episode about a band and one involving a pizza place, like in the vein of a Chuck E. Cheese…..oh boy. 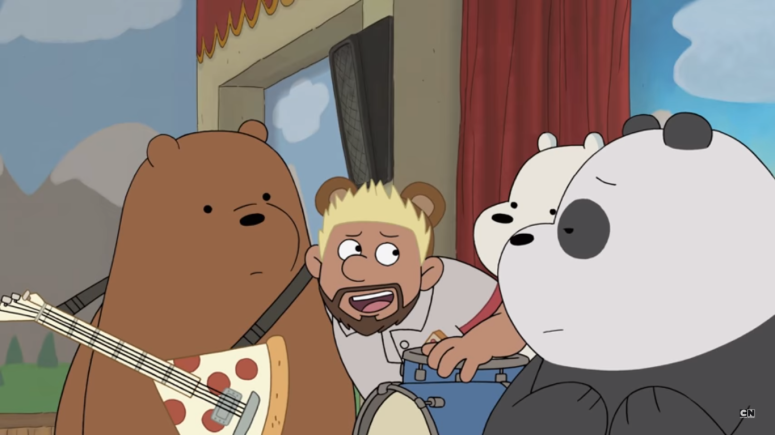 The Bears get pizza at Papa Bear’s Pizza Cave and wind up replacing the place’s animatronic band. They’re such a hit that they go on tour!

OK, you get the gist of this from the synopsis…..the animatronic band ends up being broken and they need someone to replace it with the place full of running, screaming and crying kids and the adults that just don’t give a damn and so enter the Bears. First gig was a success and the manager that looks like a Guy Fieri look-alike offered them a job with all the free pizza they can eat and thus, enter montage of them performing that song over and over again and the crowd goes wild and shit!!

Now that they gotten big, it’s about to get in their heads a lot from everyone changing their appearance from a Grizz looking like a punk rocker, Panda looking like some hipster dude with skinny jeans and Ice Bear is basically one half of Daft Punk. No, really, he actually said, “Ice Punk” and had one of the helmets and everything.

They perform that night and as you suspected, it went terrible from Grizz scaring the audience, each bear trying to one-up the other and the audience was not feeling it at all. Hell, they brought back the old animatronic bears before getting rid of the Bears.

Oh and yes, before I do the final verdict, Grizz’s singing voice is provided by Steve Harwell from Smash Mouth. FINAL VERDICT: It’s the very standard WBB episode that involves the bears getting a sweet gig and the aftermath of that. There really isn’t much to say here except that it was a’ight. I did like the Daft Punk and skinny jeans gags on Ice and Panda and also the fact that most pizza places for kids will be those that have them running wild everywhere and some of the adults don’t give a damn!! Then again, they might be exhausted from them so maybe that’s why then.

I’m MAK2.0 aka The Blue Hybrid and this is why people go for delivery pizza.