So……it’s been a while since I’ve done something like this or anything regarding stuff for ATTACK THE SCHLOCK and I remember 2 years ago, I did made one about the partnership between Crunchyroll and Funimation and like many on the internet, people freak out in either good and reasonable ways or the usual way — spouting dumb doomsday shit like they can predict what’s going to happen in the future.

Or how about a year later when Sony (or Sony Pictures Television to be precise) acquired Funimation and people reacted — well, the same? Some were skeptical yet reasonable and others are skeptical and again, spouting dumb bullshit doomsday shit.

Oh, and there’s another thing with that. You know the whole thing with AT&T acquiring Time Warner and AT&T owning Otter Media, which owns Ellation and they own……well, Crunchyroll. Yeah, a partnership between one company acquired by Sony and other one acquired by AT&T/WarnerMedia…….it’s not going to last.

Yes, on October 18, 2018, it was announced that the FUNiRoll partnership will no longer be in effect.

Here’s something from it from Forbes:

The shake-up occurred when Funimation ended a two-year partnership with Crunchyroll and its parent company, Ellation, earlier today. That also meant that Funimation severed ties with VRV, a niche streaming umbrella that offered both services as channels, and will no longer be available as a channel or part of the main streaming bundle on VRV.

Oh and another thing (and no, the upcoming thing had nothing to do with the FUNiRoll split). 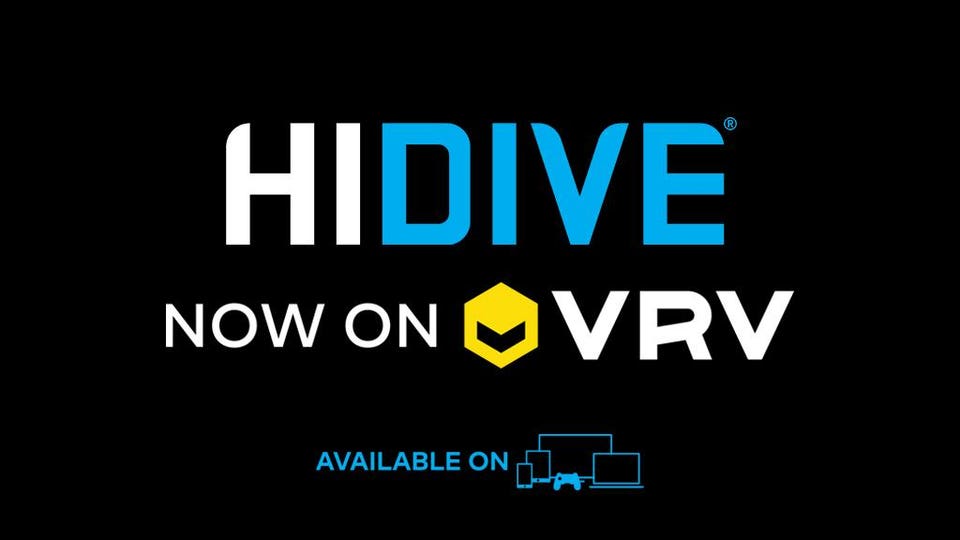 Yeah, it also looks like HiDive, which has been very successful since last year has now going to join the service soon. A VRV spokesperson said the Hidive channel will be available “within the next few weeks.” while the last day for Funimation content availability will be November 9th.

And for the VRV users, you’ll get $20 gift credit which will last you 2 free months of its premium service for the holidays, which is a nice gift and to make up for not having Funimation on there anymore and since I recently got VRV because…..well, I need to save cash and paying that and HiDive for $14 together was a good idea at the time. Welp, looks like I’m going back to FuniNow and just ax out the HiDive solo (unless they can actually link accounts like they did CR….but then again, it didn’t happen with Funi, so…yeah.) and look at it this time, they are digging into more niche stuff with HiDive, so that’s a win there.

So, my thoughts: Yeah, at first I didn’t expect it to be this soon although I heard that it was supposed to end earlier but they figure they want to end this without turning it into a giant clusterfuck of proportions and while I got to cancel and re-subscribe to some services (Yes, I’m going back to FuniNow.), at least it wasn’t a blown out, clusterfuck, Mary J. Blige “Not Gon Cry” style of break-up. After all, this is a business and now both parties got larger corporations backing them up, who knows what’s going to happen. I’m just not going to panic like a chicken with its head cut-off. Be concerned, yeah but not overly concerned.

Oh, and for the home video stuff, I guess the ones with dubs not produced by Funimation will be in Crunchyroll’s hands, examples being Mob Psycho 100, Bungo Stray Dogs, Re:Zero, etc while the rest dubbed by Funi is theirs forever and ever although they will continue to share some streams like My Hero Academia, Attack on Titan, etc. with them just going their separate ways.
Plus, they’re not going to make those shows from the FuniRoll partnership out of print so you can still get them with no worries.

I do hope Crunchyroll continues to give their shows dubs following the break-up. I do want to see shows like A Place Further than The Universe and Laid-Back Camp gets dubs and with LA getting more active in anime dubbing nowadays than in the 2009-12 days and even studios like NYAV Post and Sound Cadence Studios getting more dubs in smaller projects that gotten ignored (well, NYAV got movies on lock, anyway) and Texas always got plenty of anime to dub, I’m all good with this.

I’m MAK2.0 aka The Blue Hybrid and…..wait, with Mob Psycho 100 coming to Toonami tomorrow, does that mean we’ll see a Crunchyroll logo at the end of it?