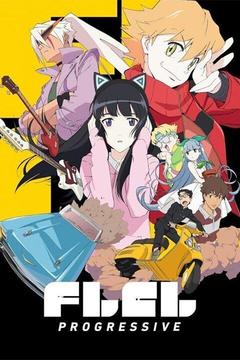 Now who would’ve thought that one of the most iconic OVAs of the early 2000s would get another entry? Sure, none of us really didn’t ask for it but it’s not like we would object to it even though since that came out, things have changed in the past 18 years since it debuted (or 15 since the first one debuted on Adult Swim).

For one, Gainax isn’t part of it anymore and to be honest, that’s a good thing because Gainax hasn’t been the same since 2010 and they have sold their rights to I.G.
Ever since the announcement of it back in 2016 and it premiering on Toonami as part of their originals, many wonder how these sequels (Alternative is another time to talk about that) will turn out.

In the new season of FLCL, many years have passed since Naota and Haruhara Haruko shared their adventure together. Meanwhile, the war between the two entities known as Medical Mechanica and Fraternity rages across the galaxy. Enter Hidomi, a young teenaged girl who believes there is nothing amazing to expect from her average life, until one day when a new teacher named Haruko arrives at her school. Soon enough, Medical Mechanica is attacking her town and Hidomi discovers a secret within her that could save everyone, a secret that only Haruko can unlock.

Now I’m just getting this out of the way, after it aired, people were split on this as some really loved it and others did not. Some say that it surpassed the first one by a lot and the opposite side said that it couldn’t live up to that Gainax classic…….Honestly, I’m with the former.

Also, this is not the same FLCL you saw in 2003 or at least it’s not an exact copy of that. This still has the elements of a coming-of-age story with that over-the-top, wacky hijinks but the overall plot or what’s happening with our nihilistic lead Hidomi Hibajiri. She is very disconnected towards everyone around her, always wearing these cat-ear earphones that’ll probably cost a grip and you’ll notice she always have these dark dreams where everything is all fucked up and death and darkness and gore and reveling in that, as that’s mainly her feelings around family drama and all that.

Alongside that, we also have Ko Ide and his friends Goro and Marco in school chattering around about this teacher that Ko had some sweet-ass time with and it turns out that teacher happens to be the one and only HARUKO HARUHARA!!!! or Haruha Raharu and as always the character brings the nutty hilarity to the screen but I think she got competition in the form of a new character Jinyu and the way these two interact with Haruko trying to absorb Atomsk and their back and forths made me laugh the most out of these episodes along with some of the things some of the supporting characters go through like Goro had a date one episode with this girl named Aiko and I was definitely a fan of her halfway into the episode (You’ll know).

And of course, you know the meat of this series is that Haruko is using Hidomi and Ko to get to Atomsk and also Hidomi and Ko are crushing on each other and yeah, even Haruko helps with that in that department. So yeah, from what I get from the story………yeah, I said this last time but shit gets bonkers. Maybe not as quick as the original but to be far, I didn’t mind that.

Oh, and as for the characters…..to sum that up all quick, yeah, I definitely fuck with the majority of them. Hidomi, Jinyu, Ko, Haruko, Hinae (Hidomi’s mother, who’s quite a cutie and I thought she was her sister at first), Aiko and even Ko’s friends were alright, even though I thought they were annoying at first and by they, I really meant Goro and for Marco…..he’s there and all but he’s the supporting character that I honestly forgot sometimes. I mean, he got a good part in here, just not as interesting as the others.

So……animation is still good and again has the insanity levels going up and even with some interesting art styles, especially during Hidomi’s dark-ass dreams and while there is new music from the Pillows and people are very excited to have them back and I understand them…….see my thoughts on them on the FLCL review and the same applies here. Again, the music is fine.

But now, the part I’m ready to get into and yes, that is the English dub and this time, the folks at NYAV Post took care of that and with some new meat, we got the return of Kari Wahlgren as Haruko and the woman is just as funny and hilarious as her 15 years later.  There’s a stellar cast of people in here from Robbie Daymond as Ko, Julie Ann Taylor as Hinae, Yuri Lowenthal as Marco (also, HEY!! Haven’t heard him in a while — and no, I don’t watch Naruto ICUAT*)

Another performance that had me going wild was Allegra Clark as Jinyu from the dry and stoic delivery she makes and of course, the two people whose performances I’d end up liking with each episode going forward. Xanthe Hyunh as Hidomi delivers a marvelous performance as with her, you do usually get something from her that’s very moe and bubbly although in episode 4, you get that, too but still, she made a good performance of that and yes, I’m going to mention Christine Marie Cabanos as Aiko because again, like Xanthe, you get something moe and bubbly out of here and….look, I don’t want to spoil anything about Aiko but it’s something to be watched.

FINAL VERDICT: While this series is very, very, very divided among people, this is still a great follow-up to the original. While being something in it’s own entity, it still manages to have the zany vibes, wild animation, and those coming-of-age themes like adolescence, growing up, dealing with a lot of shit in your teens are still present and the latter of that does have more of a compelling hold than the rest of anything in this series. I’m glad that this show made a return and did something that isn’t a rehash of the previous series. We got what we wanted and yeah, I’m looking to see what Alternative has in store.

So yeah, FLCL Progressive doesn’t have any news on home video as of yet but streaming-wise…..well, Adult Swim and that’s it.

I’m MAK2.0 aka The Blue Hybrid and watch out for cars and guitars and headphones that might fuck you up.