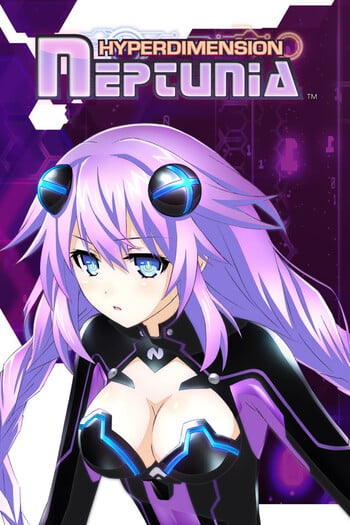 So, another day, another time I review an anime based off a video game and this one I have seen a few times before considering it to be a review title and plus, I remember liking this title when I first watched it and by first watched it, I meant I watched it when the dub came out as the original simulcast was before I started watching seasonal anime as frequently as I do now. But, hey, this got things like most anime fans would like: video games and moe girls. Like Danganronpa, this is another video game adaptation to anime that aired around the Summer 2013 season (yeah, the same season that had Free, Gatchaman Crowds, Danganronpa the Animation, Silver Spoon, Watamote….oh and one little show that was continuing from the previous season. What was it again?) 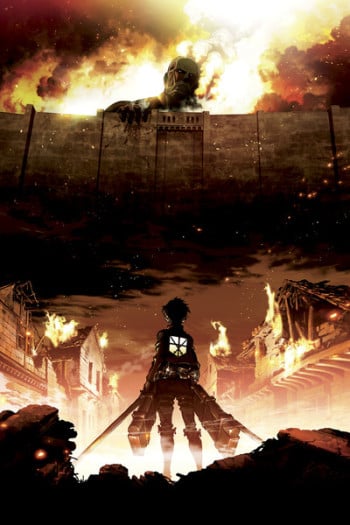 Hmm, no clue. Anyway, what the hell is this show about?

In the world of Gamindustri, nations are led by benevolent Goddesses who receive their life force and power from Shares: the crystallized trust of their citizens. Through conflict, a Goddess can also gain Shares from another region, but thanks to a recent peacemaking treaty, each ruler is on their own – an unfortunate turn of events for the Goddess Neptune, whose laziness has eroded the kingdom’s trust in her leadership! To help remedy the situation, Neptune embarks on a quest to visit the other nations so that she can become a better leader;but along the way, she and the other Goddesses discover a sinister plot that threatens all of Gamindustri – and it’s up to them to save it!

Well, if you’re looking for a cohesive story to follow in this show, I got some bad news for you. However, I’m not going to say that this show has no plot or story. It just has a bunch of crises happening in the course of these 12 episodes. The structure is like a crisis begin in one episode and probably end the next or maybe it goes over 3 episodes and while I do appreciate some elements trying to pull some dramatics into it, all it left me was a very big “meh”.

Although from what I heard about the game, the biggest sell of this franchise is mostly the fan service and I don’t mean just the cute/sexy girls in the game. I mean, the video-game industry-centric humor, the references in the character names, realms – Planeptune, Leanbox, Lowee, and Lastation – I don’t even have to tell you what those are referencing to since y’all are smart enough to know what it is.

However, it helps that our characters are well likable in their own ways. Neptune and Nepgear are that sister pair in which the older one (Neptune) is the silly, lazy and fun-loving one that loves to play video games and Nepgear is more level-headed and studious but can be anxious and something of a punching bag in some episodes. Noire and Uni are the next pair of sisters where both takes the tsundere role but Uni is more in-training as she aspires to be her sister. Then there’s Blanc and her sisters Ram and Rom and….to be honest, other than her being the quiet and irritated one whenever someone mentions her chest, Blanc is a dull character and Ram and Rom are just the twins that act cute and all and that’s fine but yeah, they were just meh. Vert is the lone Goddess that doesn’t have a little sister as she’s the maternal one in the group and also the one with them–

Oh yeah, there’s IF and Compa, the additional players here but I think Compa was the more notable one since she’s the nurse and all. There’s also Peashy and Plutia with the former being the one that does involve that melodrama in some episodes that never got me to care 100% but I really like Plutia in both forms – her regular form where she’s very relaxed and laid-back (and kinda high IMO) that loves to make stuff and sleep and her Goddess form where she can fuck you up in both ways.

Oh, and did I mention that this show was animated by David Production? Yes, that David Production. The same one that made your favorite anime that you’ll never shut up about coming this fall (and no, I’m not dissing that show at all) and while the art work is very colorful, bright and the designs are very good, too but the animation is decent to meh with some usual speed lines in some action scenes with some humorous gag animation here and there.

Music-wise, it’s…….meh. The opening theme “Dimension tripper!!!” by Nao and the ending theme “Neptune☆Sagashite” (ネプテューヌ☆サガして) by Afilia Saga and they are the same in terms of being energetic, J-Poppy, funtime sounding songs that I honestly okay with but I would just skip the opening and ending song but that one ending song used in episode 10, “Ito” (糸) by Afilia Saga….I can definitely go with this very emotional track and it does work for a while.

Now, unlike Danganronpa the Animation, they actually got the majority of the video game cast in the anime and I really dig their performances overall. It was a bit stiff in the beginning and some performances I was meh on but it was pretty good. Also, when I heard that Melissa Fahn and Christine Cabanos was going to be in a FUNi dub with a LA cast with some replacements for some characters (Tia Ballard filling for Sandy Fox as Peashy; Megan Shipman filling for Kate Higgins as IF), I had to check this out and I absolutely love Cherami Leigh as Plutia, especially the way she goes from her normal Plutia voice to her savage Plutia voice. (OK, sadistic, but I think her Goddess form does so savage but that’s just me.)

FINAL VERDICT: OK, this doesn’t have much of an overarching story here and some of the stuff that’s supposed to have some emotional value fell flat but with the humor, its likable and cute characters and beautiful art style/decent animation, I honestly enjoyed the hell out of it. It’s not going to be a title I would easily recommend and it is also one of those titles that has some weird scenes in there and if someone were to walk in while you’re watching it, they’ll give you them crazy eyes. But, overall, it’s a decent show if you just want to relax and have some cheesecake anime.

HYPERDIMENSION NEPTUNIA is available to own on DVD/Blu-ray Combo pack from FUNimation Entertainment (and yes, it’s on the S.A.V.E. Edition). Streaming-wise, catch it on Crunchyroll, FUNimation NOW and Hulu.

I’m MAK2.0 aka The Blue Hybrid and man, I love this bloopers at the end of each episode.