6 minutes in and I’m already going, “Yup, this is a fantasy anime all right.”
Oh, yeah and look who’s making it…..

“Wait….did you have an A-1 Pictures show in your best of 2017 list?”
And…..? One anime I loved doesn’t change the fact A-1 does have lackluster shows in their belt and…..well, let’s see this one out.

This is Record of Grancrest War. 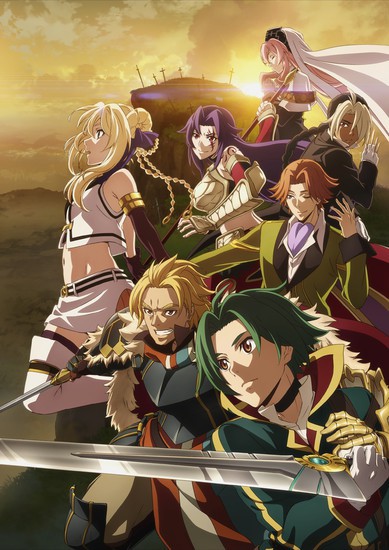 Plot Summary: Fearing disaster brought about by chaos, the people lived protected by “Lords;” those with the power of “Crests,” used to suppress the chaos. However, the Lords decided to abandon their posts and began fighting against each other secretly in war, stealing each other’s Crests to gain dominion over one another. Among these people are Siluca, a lone mage who despises the Lords, and Theo, a vagrant knight who continues his journey of training to someday liberate his homeland from tyrannical rule. They make an oath as master and retainer, with hopes of bringing reform Atlatan, the land ruled by chaos.

First Thoughts: Yup, it’s definitely a fantasy title with the whole plot sounding something like from a JRPG and….well, I don’t hate it. I knew what I was getting into and yes, I know it’s from the same guy that did Record of Lodoss War aka a show I never saw and……it’s a’ight, I guess. Yeah, that’s all I can muster up at this point. It’s the basic “I hate this tyrannical sons-of-bitches and we’re joining up to liberate my hometown and maybe there might be a pairing between us” plot and I’m not really all that jazzed up on it but to pass the time or use it as BG noise…it’ll do.

So this is very LOW PRIORITY WATCH close to BG NOISE.

I’m MAK2.0 aka The Blue Hybrid and wait….Atlatan….oh, I thought that said ATLANTA at first. Speaking of which, MARCH 1ST!!! YEAH!!!