I have said that last year while there was anime I liked, there wasn’t one that got me head over heels?

Welp……it changes now!!! This has been a better year for anime in 2017 for me as I managed to find shows I considered to be at my higher echelon of good anime; whether it was a sequel to a show I already liked or any new property that would get a TV adaptation. I said last year I didn’t give a perfect 10 to a show….I gave those to 3 shows this year and yeah, I’ll stand by that.

I will say that the down side of all this is that some shows I did like happen to be a certain service that has a double pay wall and lousy service from what I heard. Also, I got 4 shows from that service on my top 10.

But you figure that out on your own. First, here are some Honorable Mentions!!!

This is really grew over me when this aired. I liked the calming atmosphere and surroundings of the series along with the character dynamics (also helps that all of them are likable and have some compelling personalities) and building upon the mystery that is the Konohanatei. I said it before and I’ll say it again…this show was very cute, emotional and heart-warming.

Another charming show that has a bit more edge (and by edge, I don’t mean that usual type of edge) as you begin watching and has an adventurous imagination and visual scope. The character dynamic between Sana and Zoroku is truly the best aspect of the series as this old man along with his granddaughter are in care of this mysterious little girl. This show is definitely admirable in all the right areas.

Yes, this was going to be an honorable mention. What? I had more shows I liked more than this but I will say that this is a vast improvement of the first season. 12 episodes meant that the fat was trimmed and we got better pacing along with some character insights that definitely deserve some credit like Sasha being from the joke character (Potato Girl) to a badass to other characters like Connie, Hange and especially Christa and Ymir having their standout moments in there as well. Oh, and the deaths the first time were frightening as fuck, although that one guy that ran out of alcohol was kinda funny. Here’s to Season 3 coming up Summer 2018.

OK, this is a rom-com anime that I can get behind and it’s a 12-minute format series with the characters’ awkwardness actually contributing into the situation and it doesn’t get annoying or overbearing or add any stupid or unnecessary gimmicks into it. Again, another light-hearted breezy and charming show that I was really into. Kudos, Tsurdere Children, I might give you a watch again someday….or into the new year.

Well, isn’t this a bitch? I’m actually putting a KyoAni show on my best-of (honorable mentions) list and suddenly, hell froze over and I got signed by…..OVO? What the f–anyway, I definitely fucks with this show. I was completely enamored by everyone in this show and the silly hjinks they get into. Maybe I’m just into KyoAni more when they are into their comedic side than the dramatics…..well, the comedic side that’s done decent and not pretending to be something it isn’t and that’s what Miss Kobayashi’s Dragon Maid turned out to be.

Are you surprised? Well, actually, you should be. I didn’t know jack shit about the first anime in 2003 and like any other anime series, I’m treating this as its own entity and I really got into with what I saw there. Kino was a character that I definitely want to follow on in the series and even on episodes where she wasn’t the main focus, I didn’t mind all that much. That one with the slave might be my favorite in the series and I do sense why some people who loved the 2003 series and the manga are let down by this but honestly, this works better for me than shows like Mushishi or Rakugo where I felt those shows were a slog to get through. So, yeah, I’m with this.

The next few shows are indeed shows that aired on streaming site I don’t want to name here. Now, I did marathon through this when I had a free trial of it and I was hooked. It might be nothing new to most people who are favorable to fantasy anime, but I was with the journey of this 110%. The chemistry between Zero and the Mercenary was another favorite character moment of mine in the year and the action and story overall totally got me into it as a whole.

Wow, another fantasy anime on the list and yes, another Anime Strike anime on there and I love going back to the world of this series and loving the action and the thrilling adventure of the show and I genuinely love Nina Drango as the main character. She really made the show enjoyable for myself, as well as the return of two leads from the first series. While I may not like it as much as the first series, this was still an enjoyable ride. 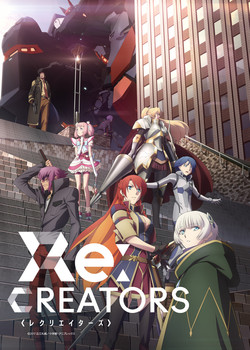 OK, I had this very high before moving it down because this was an anime that really spoke to the creator in myself. I love the concept of fictional characters entering into our world and gives some commentary on the character process, which I thoroughly enjoyed and engaging with the plots and twists along with the stellar action in there. The reason why it’s not as high as it used to be….that villain was too OP that it was annoying and I felt like that end wasn’t that satisfying to me. However, this show was still one of the best I saw this year. 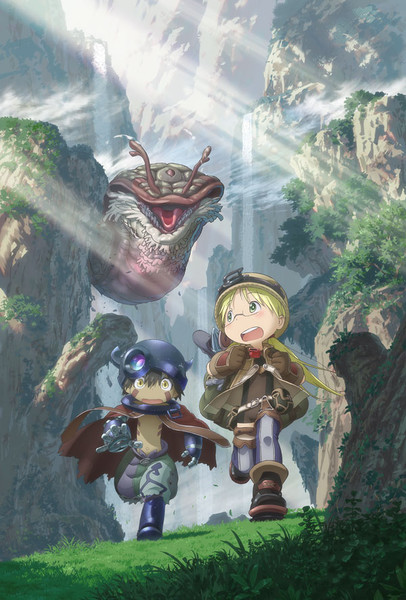 Talk about a surprise for your ass!!!! From the mind-blowing visuals to the engaging premise to the side stories of what happened to said characters of this story (which with no spoilers…..this was pretty fucked up what happened to [blank blank blank] and all the shit happening to [blank blank]), this was a damn good and terrifying adventure anime that took some risks with our characters and thankfully, while it has some edge, it wasn’t in-your-face about it. Made in Abyss was a good surprise from this year and who knows what will happen in the sequel to this.

ANOTHER SURPRISE ON HERE!! A show from A-1 Pictures appears and this happens to be one of my favorites of the winter season this year (well, pre-you know what). I like the fact the teacher, Tetsuo, is very curious learning about the lives of demis and the three girls look up to him as a teacher and all three of them happen to be absolutely likable and charming…in other words, the cinnamon rolls too good for this world. Oh, and I also include the teacher Sakie Sato, as she’s a succubus who tries to hide her aphrodisiac so she doesn’t inadvertently pull a Mary Kay LeTourneau. This show was just a pleasant surprise from start to finish and I’m not hoping for anymore but it would be nice to see more of these characters.

Speaking of seeing more of characters I like, Blood Blockade Battlefront returned like it never left in the first place and we gotten more into characters like Chain (which is much appreciated), more into Michella and Leo, and even one episode with K.K. and her kids (which might be my 3rd favorite episode of the series). Everything about the show is still as great as it was when it first aired in the Spring season a couple of years ago and the only thing that changed is that we didn’t wait 5 months for a finale.

Yep, it’s still airing and already this is a perfect 10 show for me. Everything what I love about this show just elevate for me even more with the shogi players, what’s going with Hinata and all I got to say for that arc is two things: One) Damn, I feel for Hinata and I admit, I got emotional watching what was happening to her. Two) I’d probably whip the shit out of those people messing with her…..but then I remember that might make it worse. Anyway, the only thing I just got to say about this show is that it’s still amazing and it’s one of the best anime dramas this and last year!

Speaking of things elevating to a new level, my love and respect for My Hero Academia did that this year. It made me have a lot of concern and engagement for the majority of characters in here, even for Bakugo….OK, maybe not concern all that much but still, I get his character but I like everyone else more. Also, this shows me that this is a shonen show that I can get behind on because of how engaged I am with everyone in here and another thing…….Look……I don’t care if this is got faster pacing than the manga, slower pacing than the manga,  something from this in the man— LOOK, I’m WATCHING THE ANIME and guess what? Blue Exorcist: Kyoto Arc stuck to the manga and that sucked. Look at Black Clover…..nuff said but I want to end this on a positive note. I can’t wait for Season 3, this show is incredible and I love every damn character in here…..well, except for a couple. Also, Ochaco is best girl….and every girl on this show is best girl.

OK, it’s no surprise that I love Studio Trigger but I really fell in love with this show and to me, this is Trigger doing something that can appeal to a younger audience and I really appreciate that of them. From the whimsical nature of it to the magic high school that’s actually awe-inspiring and brings the magic rather than just throw it in there just cause and the message of never giving up and the triumph of the underdog, something that’s been missing a lot of….well, anything in media. This is on the higher echelon of great shows by Trigger like Kill La Kill….only I would show this to my nieces and nephews than KLK. Come on, you know why. But yes, this is a magical show in every sense of the word from its characters, the premise and the world-building of it and it just brought some heart into it…and that is why Little Witch Academia is my #1 anime of 2017.

Oh, and it’s definitely worth the wait of having it to watch on Netflix.

That was my last year “Best of” list and it did managed to be better….well, for anime. Anything else…….yeah, that’s not my department on that.