I would say something like “you’ll notice a trend of x in anime” but then again, there’s only been like 3 anime in the past 3 years that covered it and it’s only one in 2015 and the two in 2017 and that thing is….monster girls. Yup, the wonder of a female version of something like a centaur, a bird, lamia, slime girl or any other variation of that. There has been mainly 3 shows that focuses on monster girls since 2015 and I’m going to cover the first of one today that premiered in the summer of 2015. One that I did check out late without doing a first impression of it and that show is…..Monster Musume/Everyday Life with Monster Girls. 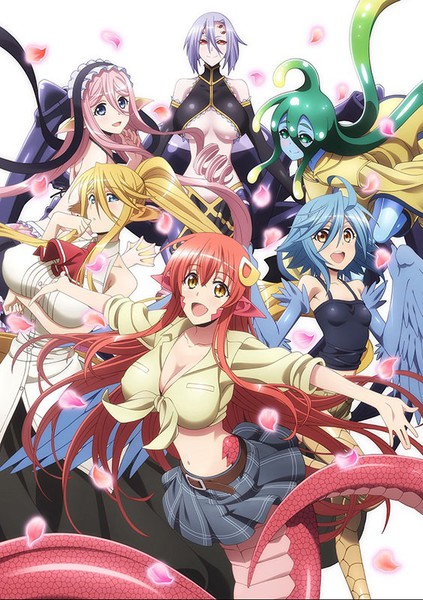 For years, the Japanese government has kept a secret: mythical creatures such as centaurs, harpies, and lamias are real. Three years before the start of the story, the government revealed the existence of these creatures and passed a legal bill, the “Interspecies Cultural Exchange Act”. Since then, these creatures, known as “liminals,” have become a part of human society, living with ordinary families like foreign exchange students and au-pair visitors, but with other duties and restrictions (the primary restriction being that liminals and humans are forbidden from harming each other).

Kimihito Kurusu did not volunteer for the exchange program, but when Ms. Smith delivered the very scared and embarrassed Miia to his door by mistake,he did not have the heart to send her away and they started living together. As the story continues, Kimihito meets and gives shelter to other female liminals, each of a different species. Some arrive more or less by accident, some are forced upon him by Ms. Smith, or force themselves in, and it does not take long for him to find himself in a hectic environment where he struggles to live in harmony with his new housemates while dealing with both their constant advances and the dramas of helping them get along in the human world. The situation takes on a new twist after he is told that because of expected changes in the law dealing with human-liminal relationships, he is expected, as a test case, to marry one of the girls, thus increasing their competition for his attention.

So, given that this plot is basically this guy is taking care of all these girls and eventually they’ll fall for him and things get wild and hectic among the ever-growing household and yes, this is basically a harem…and an ecchi. And you know what? There is actually a bit more to this from the surface, especially with that Interspecies Cultural Exchange Act and how some things are quite fucked up considering the restrictions of “if you fuck your liminal guest, you’ll be arrested and they’ll be deported” and how about the “liminals and humans are forbidden from harming each other” when in the show, several humans tried to harass, bully and assault our main monster girls. Yeah, this part is fucked up period. But yeah, I’m digging on what’s going on along its plot. It’s basically slice-of-life with the comedic and harem parts of it and usually, I get irritated with those shows because it’s basically the same gags repeated over and over and the lack of likable and enthusiastic characters but this time, the characters are actually worth giving a damn about (we’ll get to them later) and as an ecchi, this is one where the plot is actually good. As in, it’s not weighed down by some generic fantasy plot that no one is going to care about (*coughHighSchoolDxDcough*) or some mecha war that you couldn’t remember to recall. It’s already steady without adding in unnecessary genre elements that makes it superfluous.

On to the characters, let’s start with the titular monster girls themselves and I’m giving my very brief thoughts on them, one by one:

Miia: lamia girl, has that pleasant/passionate lover appeal to her since she calls him Darling-kun, might kill you in your sleep unless you jack her off snake-tail, a bit possessive of Kimihito, really wants to be his bride-to-be.
Papi: harpy, playful, amiable but a bit of a bird-brain, refers to Kimihito as Boss.
Cerea: centaur girl, noble, brave, almost if Saber from the Fate franchise reincarnated into a liminal, refers to Kimihito as Master
Suu: slime girl, mostly silent but often makes some noises, also refers him to Master
Mero: mermaid girl, not the “Kid” Mero mind you, got a Gothic Lolita appearance, like tragic love stories a lot, refers Kimihito to Beloved
Rachnee: Arachne, does not like humans…at all (reason why is a spoiler and one I do get), into some kinky shit seeing how Kimihito likes her spider legs, refers him to Honey. will have you stuck in a web a lot
Lala: Dullahan, not that talkative……OK, there isn’t much to say since she appears near the end of the series’ run.

As for our lead, Kimihito…..this is a lead that I can agree with although I can see people dismiss him as bland or meh. That’s quite the opposite as he doesn’t seem like a milquetoast harem lead since he is often a patient and assertive guy and knows well enough to not violate any of the rules that might get them deported/arrested. Plus, it helps that he looks to these girls as real people and not freaks or monsters as he genuinely cares about these girls’ well-being. Oh, and also he’s not a raging pervert stereotype either. A tad horny but not Harvey Weinstein…..or Kevin Spacey…..or Dustin Hoffman…..or Louis C.K…….or Russell Simmons……or Brett Ratner…..or….OK, fuck it, you get the point.

Oh and there’s Miss Smith, who is the coordinator of the exchange program and often watches over Kimihito and the girls but often she is very lazy as fuck (sexy, too, but lazy) and she has her team of monster girls called MON and they are:

Animation-wise, this is vibrant and bright with gags abound along with some distinguishing  character designs, mainly the main monster girls and all. However, I did watched the uncut version of this and let me remind you: This is definitely NSFW Material as in you’ll see T&A and moments that—Actually, it’s Not Safe for Work, your parents, your siblings, your friends that don’t watch anime that much….in fact, it would go like this (although slightly different than this but these dudes are funny to watch as well).

(But yeah, watch them and My Hero Academia as well.)

Oh yeah, the music here is mostly meh for the part. It’s there to do its job and blah blah blah…although I did like the ending theme sung by the MON girls even though before their appearance, I was wondering who the fuck are they and the song really doesn’t fit following each episode.
As for the English dub, I would say it was moderately decent in the writing and direction overall. I did like Allison Sumrall’s performance as Miia although sometimes I did confuse her for Monica Rial time to time (BTW, she voices Suu) whenever she was in her high voice. It was also nice to hear Shelley Calene-Black as Ms. Smith (which was a good choice for that role) and for the guy, Bryson Baugus….two things. 1) At first, he was mostly stiff but he got better into the role. 2)I almost read that name as Bryson Tiller at first hearing the voice cast announcement.

FINAL VERDICT: You know, I really enjoyed this anime and I don’t mean just for the ecchi parts, I mean that this is a show that has something endearing into its characters along with some gags here and then and a plot line that’s organic to the show and not just some add-on to say that it has a plot. It’s definite bizarre yet good to still follow through. I will say this is probably not going to be for everybody and that’s fine. This was going to be a guilty pleasure for me but to be honest, I don’t feel guilt watching this…..maybe awkwardness and bad timing if someone walked in on a certain scene but not guilt.

MONSTER MUSUME – EVERYDAY LIFE WITH MONSTER GIRLS is available on DVD and Blu-ray from Sentai Filmworks. You can stream it on Crunchyroll and HiDIVE.

I’m MAK2.0 aka The Blue Hybrid and make sure to have your lamia guest to not hug-strangle you in your sleep.