Damn, another two-fer this week. Not that I’m complaining but this is the 2nd week in a row this happened.

Oh, and for part 1……this asshole is back and I don’t mean Nom Nom. Another asshole is back. Remember Ralph? That one character that thought he was Charlie’s friend but Charlie saw him for the prick he is? I mean, the dude’s idea of comedy is cutting off a bridge and having people fall to their deaths. 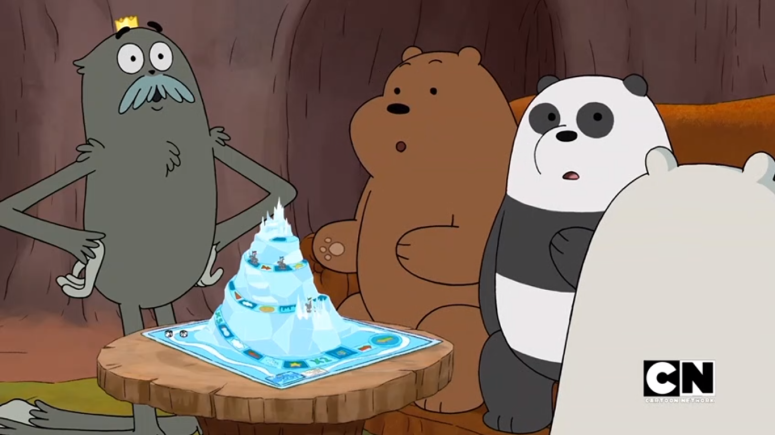 Well, he’s back. But for what?

SYNOPSIS:
Ralph takes over the bears’ cave and turns it into a snowy fortress where he reigns as king over the Bears and Charlie.

So the bears and Charlie were playing this board game called King of Frost Mountain (Also, Adventure Time REFERENCE!) and guess who happens to pop back? It’s Ralph, and he’s being his usual dickhead self and bragging about how he’s the King and all (As someone with the last name King, just fuck you, Ralph.) until he got handled by Ice Bear and kicked him out.

Overnight, Ralph snuck in, knocked out Ice and transformed the whole cave into an….ICE CAVE. He trapped Ice Bear in a frozen tub and made the other bears and Charlie his bitches (OK, servants, but still). Eventually, Ice Bear is free and he is ready to kick some a–DAMMIT! I think Ralph knew he was going to attack and trapped him there. Now Charlie had to be the one to stand up to him as he should. Also, Ralph….you’re calling Charlie non-chill? Motherfucker, he is chill as a cold glass of lemonade, you abominable snow-bitch.

Ralph gets defeated and thrown out (although he should’ve let that icicle hit him) and Charlie is KING…of Frost Mountain.

Now, time to relax…at the SPA!!

SYNOPSIS:
The Bears have a relaxing day at the spa. Grizz tries to get everything the spa has to offer. Panda gets trapped in the steam room with an old man. And Ice Bear plays ping pong.

Yeah, the synopsis said most of what was going on. Grizz thought he had a 99% free coupon of Hill Spa but it turns out he had one for Bill’s Spa and so he’s fucked. (Also if I had a 99% free anything coupon, I would wild out like a motherfucker!) Panda tries to get out of that steam room but he can’t read Korean on the thing and why does that old man keep bothering him about candy and as for Ice Bear and Ping-Pong….

This Ping-Pong Match >>>>>>> All of Ping-Pong The Animation.
*drops mic*#WeBareBears

Yeah, you heard me. I meant that, for real.

Anyway, in the end, Ice Bear and Korean Spa lady had a match. She won but when she finds out that Panda saves the old man that turns out to be her father, they let them off the hook.

FINAL VERDICT: Ice Cave – Why was Ralph back? I mean, if it was for Charlie to stand up to him, then OK but didn’t that happen last time or…..wait, it didn’t. OK, that’s one good thing but fuck, Ralph is a grade-A asshole and I don’t think we’ve seen the last of him but I know this….someone please kick his ass on the next episode he’s in. Spa Day – OK, this one was pretty funny alright. I like the Ice Bear/Ping-Pong stuff and that moment when Grizz is getting a body scrub and those end results. 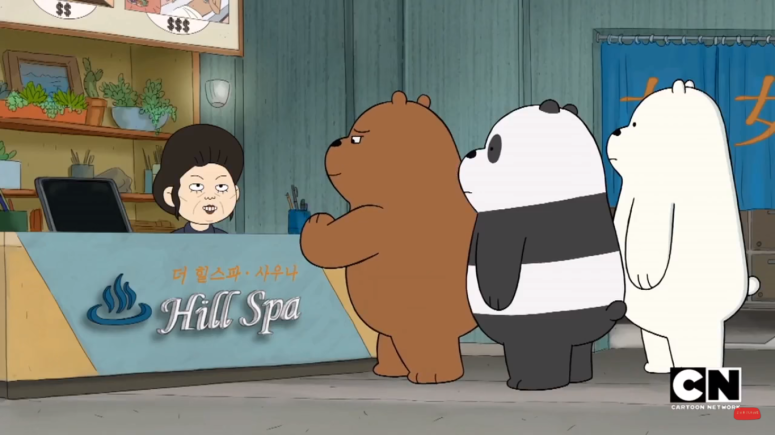 I’m MAK2.0 aka The Blue Hybrid and I forgot to mention I watched these episodes earlier on that CN App. Can’t wait for that Halloween one next week.