well, see you in another 3-4 months or whenever the show comes back.

That was April 27th the last time I posted an We Bare-Cap Bears and hot damn, I was right. We Bare Bears is airing all new episodes this week and yes, this is another….well, BearBomb? I think? Or just call it a week full of new We Bare Bears and I’m thrilled to hear that.

Hopefully writing about it won’t be as exhausting as it was 3-4 months ago. (Hey, I love the show dearly but damn, they packed a lot in there!)

Anyway, today’s episode: The baby bears are back!! This time…..at…the Fair.

SYNOPSIS:
The baby bears become prizes for a carnival game in hopes of being won and taken to a new home.

So once again, the little Baby Bears are out in the open road doing their thing and we see them trying to sell themselves to people so they can finally have a home but there was no such luck. Soon, they run into this guy running the ball toss and he’s not having any luck as well. The guy’s name is Lewis and they struck a deal with him, offering themselves as prizes so someone can take them to their home.

And of course, they kick it with that Kris Kross style…..(Yeah, I figured the flashbacks were in the early 90s. I mean, they have those big-ass cellphones that weighs like a brick)…..

OK, now if you ever been to a carnival and tried out the ball toss, you know the ordeal. They charge you to hit the pins and no matter how strong you are, you can’t hit them and you over pay the carnie many times to hit them but you can’t knock them over. 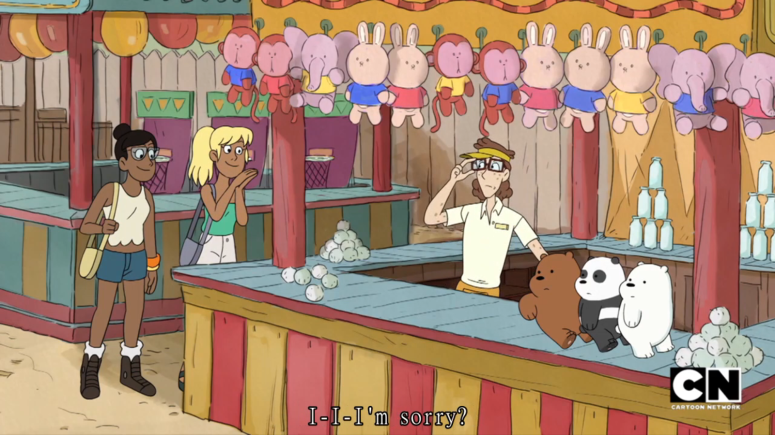 Guess what? It’s rigged. Yep, rigged and Lewis isn’t about to let them go one bit. He holds Panda and Ice Bear hostage as prices for Grizz to win them back.
Grizz winds the pitch, he throws it, people are watching and……..well, the pins didn’t get hit but Lewis got hit right in between his legs and is in pain. The bears escape and the people know the game was rigged and we cut before Lewis gets the shit kicked out of him. 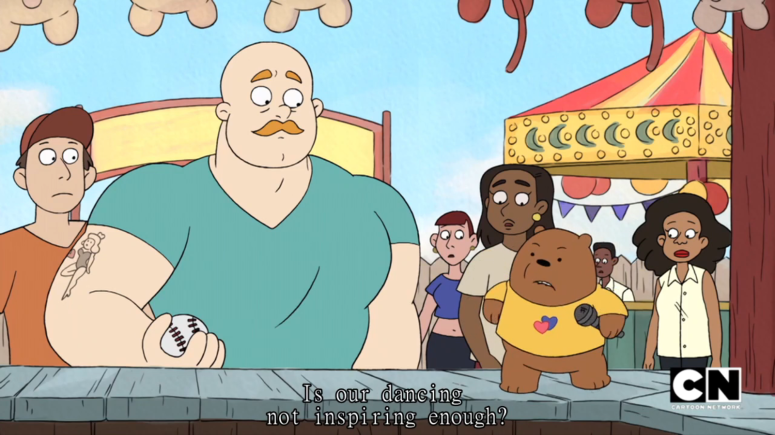 They leave, noting that if their future is to always be taken advantage by some asshole but one psychic machine told them, “The road may be tough but as long as you stick together, your future will be happy and good.”

Oh, and also said that that’ll live in a cave.
Damn, he’s right. VERDICT: Yeah, yeah, this is another Baby Bears episode where they are being taken advantage by some asshole and Lewis…..well, I don’t know if he’s worst than Dave and Cory although Dave is still top-tier asshole one-time villain for the Baby Bears. Lewis is just a schemer that got what was coming to him and props to “Weird Al” Yankovic for providing the voice. I also did like that with the whole 90s-style rap of theirs and the bits with the psychic. Once again, we got a very charming episode out of these baby bears. I’m MAK2.0 aka The Blue Hybrid and really, that guy has one of those big-ass cellphones.