So is this an anime that centered on a top prestigious private school funded by the government that also gives you money as well? So basically it’s what every school in a light novel anime looks like.

Oh, my bad, it’s based on a light novel so go figure.

This is Classroom of the Elite. 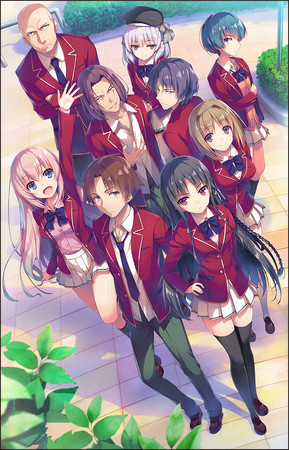 Plot Summary: Kōdo Ikusei Senior High School is a leading prestigious school with state-of-the-art facilities where nearly 100% of students go on to university or find employment. The students there have the freedom to wear any hairstyle and bring any personal effects they desire. Kōdo Ikusei is a paradise-like school, but the truth is that only the most superior of students receive favorable treatment. Kiyotaka Ayanokōji is a student of D-class, which is where the school dumps its “inferior” students in order to ridicule them. For a certain reason, Kiyotaka was careless on his entrance examination, and was put in D-class. After meeting Suzune Horikita and Kikyō Kushida, two other students in his class, Kiyotaka’s situation begins to change.

First Thoughts: Hmmm….a few minutes in and I can definitely get with what’s going on in here. In the first episode of this, basically the students in here were given a cash value of 100,000 yen to spend but if you manage to fuck up in class like talking, sleeping, being late, etc; you won’t get shit at all and if you manage to blow it on video games, accessories or whatever frivolous shit you can think of, you’re fucked. Yeah, if I was in that class, I wise the hell up and maybe not spend my yen that fast. Also, for our 3 main characters in here, I did like how Kiyotaka has that “I don’t give a shit” expression most of the time and even though he acknowledges he fucks up, it looks like he couldn’t care less. Same can be said for Suzune Horikita, who wants to be the lone wolf and yet for Kikyo Kushida….she’s the person who really wants to be your friend so much but can’t take the hint that you don’t. I mean, I don’t have any hatred towards her but you got enough friends already. She has a likable personality and definitely friendly….just don’t push that factor on her too much.

Again, I’m interested in seeing how this will go. While I notice a lot of high school tropes in some minor characters, I’m all in for this.

I’m MAK2.0 aka The Blue Hybrid and if I had 100,000 yen, I would definitely spend on music, anime, etc….but if someone mentions I’m not getting more this month because I fucked up, you better go cheap like a motherfucker.