Well, I had a lot more than that but I had to make a lot of cuts but that shit would be too long to do. There has been cuts from Toradora! (Minori would be first, then Ami…..yeah, Taiga’s last.), Daphne in the Brilliant Blue (Shizuka, Maia, Tsukasa, Yu, Rena, Gloria), Shiro from Deadman Wonderland, Madoka Magica (Madoka, Homura, Mami, Sayaka, ), etc.

Anyway, like last time, my picks are very varied in terms of what I like about these characters from their personality, to how much of a badass they are to how funny and/or intriguing they can be. Also like last time…..

Now I admit I’m only basing this because of the anime adaptation…well, OVA adaptation but yeah, these girls kick a lot of ass in what I saw in there and they make up to be entertaining characters whether they are in the action or when they are on down time.

MARU! Again, another show that I was OK on but still actually liked a lot and I have to admit, thinking about this show again and I do admit that I like the high energetic and spunk of the lead, Madoka Kyono and she is so just damn cheerful and eager to help a lot of people in her town. It’s quite intoxicating the levels she’ll go to help someone or something out…especially considering she got a Vox in her command. 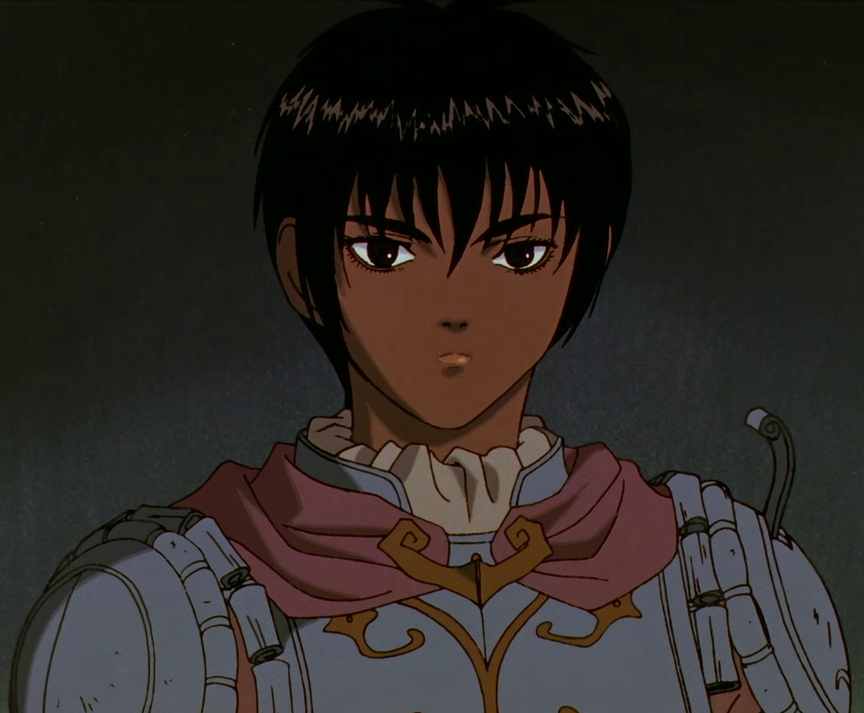 If you think that Casca was bitchy to Guts when he joined the Band of the Hawk, well……OK, I can see that but to be honest, she has a point of being suspicious to him. Point is, Casca is a damn good character in Berserk both in emotional resonance and as a fighter and considering all the shit she went through in her time from facing sexist pigs to being the only woman in the Band and……well…..all of you rather read the manga or saw the original anime at this point and…..yeah…….

BEHOLD! The one tsundere or tsundere-type character that I actually like because here’s a hint. I usually can’t stand tsundere types and why Rin is the exception? For one thing, she knows what the hell she’s doing most of the time, she’s actually intelligent, snarky in a good way and also, she’s less infuriating than our lead fuckboy. 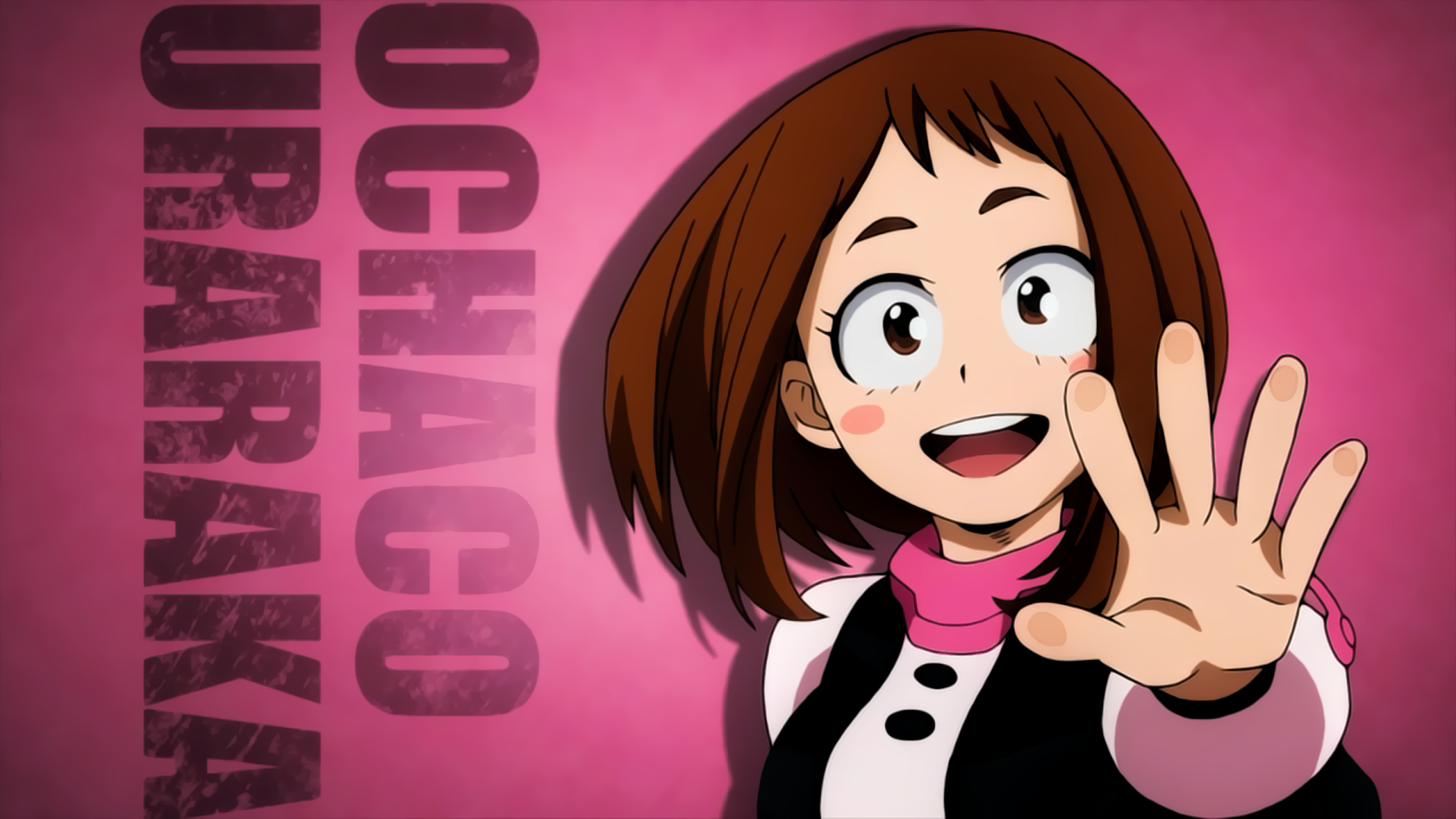 OK, choosing best girl from MHA is a hard thing to do because all of them got such likable traits and I’m really quite fond of all of him but if I had to choose one, it would be Ochaco Urakaka. She’s a good friend to Midoriya (and fuck it, they’re cute together. IDGAF what y’all say.), got a plausible reason to be a superhero and yes, fighting crime to get money to support your loved ones is nothing to be ashamed about and if you’ve been catching up on MHA this season, she is definitely one hell of a fighter that can take on her opponent and she is definitely not a frail little girl. This girl, like Deku, got a lot of heart that makes me root for her all the way….but Bakugo is still a bitch motherfucker and fuck him….

And speaking of ‘fuck’ and ‘you’, this is one for the Japanese readers that pick her as Worst Heroine in 2016. Really? For fucking real? I know, I know….it’s just a poll but…..for fuck’s sake. (My rankings for favorite female character on this show are followed: Urakaka, Tsuyu, Mina, Momo, Toru, the rest) 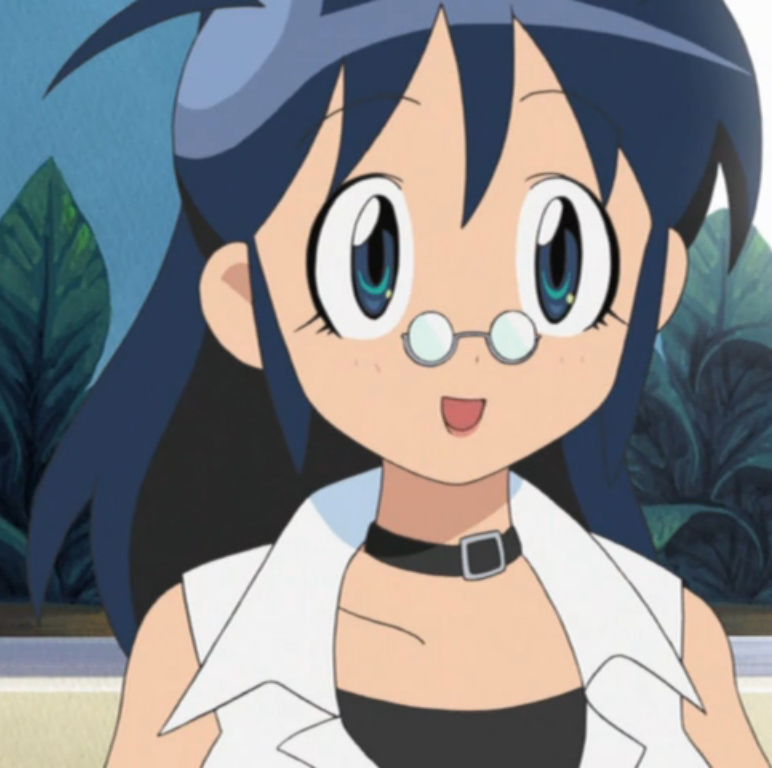 Yeah…..I got a crush on her. OK, fuck it, you got me but the thing is it’s what about her character that interests me as she’s a manga editor for a company and unlike the others, she is thrilled with the idea of alien frogs living in her house as she could use them for ideas for whatever manga or stories she got planned. She’s laid-back, plays it cool and knows that if you mess with her, consequences will happen and probably one of my favorites on Sgt. Frog. (My rankings for favorite female character on this show are followed: Aki, Koyuki, Natsumi, Momoka, Angol Mois.)

Misato Katsuragi is like your cool aunt that you visit as a kid that often drinks a lot, got a nice-looking car (at first), and a stable job of being operations director at NERV. OK, that last thing may not be usual but it happens. To me, Misato felt like a mother figure to Shinji although she’s known for making a lot of mistakes in her life now-and-then yet that aspect does make her relatable and sympathetic in a way. (My rankings for favorite female character on this show are followed: Misato, Rei, Mari, Asuka)

You know how Plankton from Spongebob Squarepants thinks he can take over the world but really can’t do it? Yeah, I got that same feeling with Squid Girl as when she tries to do the whole “I will take over the surface world”, I just go and say, “Aww, that’s cute.” and then I remember she got tentacle hair and can fuck me up. Although I think someone might like that……you’ll see. Anyway, yes, she’s cute and all but I think her attempts of doing that along with living in the surface world, meeting new friends and all that is very charming. 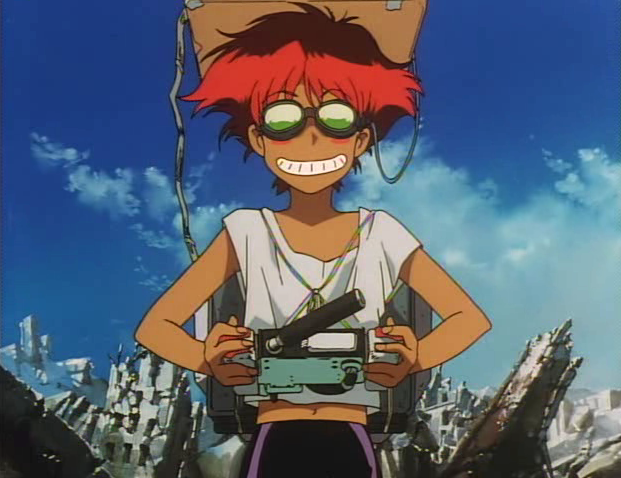 So…..how many of you thought I was going to pick Faye Valentine? While I do like Faye as a character, Edward was the more interesting female member of the Bebop to me. Her all-around eccentric/free spirited being, her fascination with electronics, and her presence around (at least for ep. 9-24) does give the show a lighter/funnier tone to contrast the darker elements of the show.

HA! Another surprise as I could’ve went with either Mikasa or even Sasha but when she made her first appearance on-screen, I immediately thought of two things: OK, this woman is beyond insane in some parts when it comes to Titans and second…..hot damn, I love this character but if you think of her as just some usual wacky character, you’re wrong on that as currently at the time of me writing this, Season 2 really give her more of a serious highlight on her character along with other side characters that aren’t Eren, Mikasa and Armin and it is surprisingly strong throughout.

Now we go to happy-go-lucky characters, which is a type of character trait I can easily resonate as long as they don’t go overboard about it and Hajime Ichinose fits the bill to a tilt. Yeah, she can be easily overexcited about things but it doesn’t come off as stupid or mindless, she just enjoys what she’s doing and being a Gatchaman really got her ass excited as hell. Now from happy-go-lucky to shoot’em up bang bang!! An extremely dangerous woman that definitely takes no shit from anyone, even her allies, and always a treat to see her in action (especially in English with UNLIMITED PROFANITY!), especially during one scene where she shoots a guy as he’s doing a monologue about his gun. Hell, you would do that, too, if someone kept doing that. Either way, I’m intrigued, aroused and frightened by her. 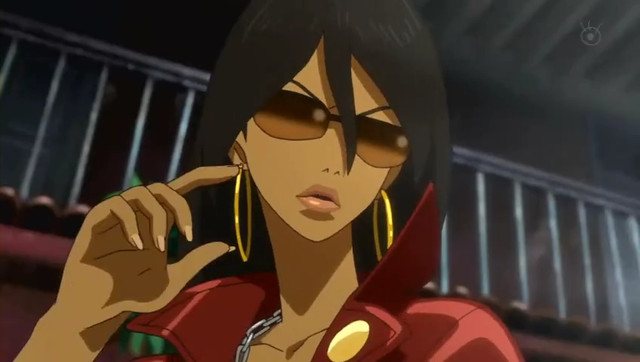 I have said this for the longest but Shirayuki from Snow White with the Red Hair is just a delightful character from start to finish. To me, she’s someone who is resourceful, knows her shit when it comes to plants and herbs and can handle herself in the face of danger but not in a Mary Sue-type of way. Not to mention that as a person, she’s definitely cool with a lot of people and shows that high class doesn’t automatically makes you a better person. 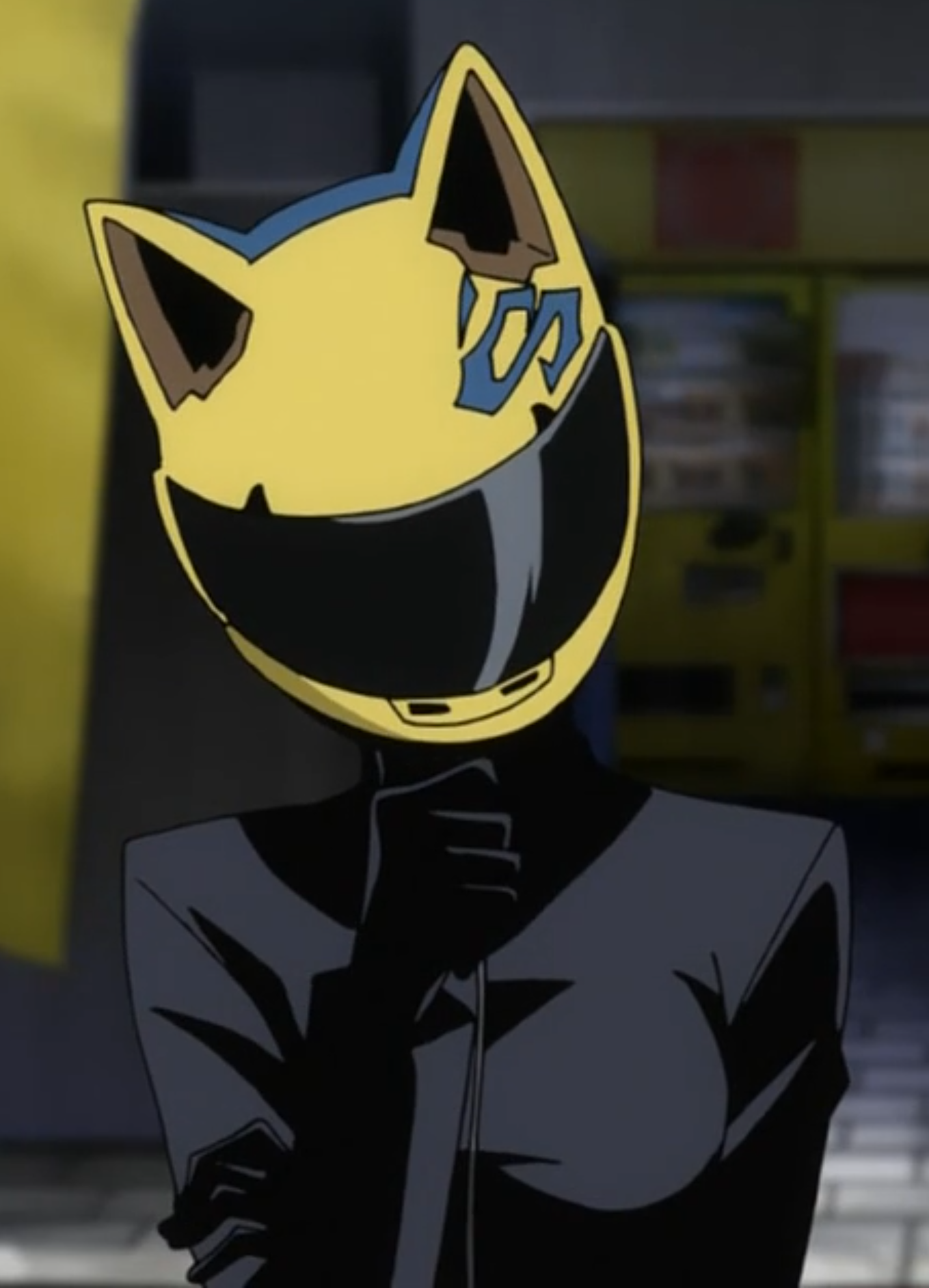 Definitely one of the best and interesting characters of the series as a whole, merely because of the fascination of dullahans and her story of how she is what she is. Plus, I do like the interactions she has between her and Shinra as I thought their relationship was cute and all.

YOU…..DAMN…..RIGHT…..I’m putting her on this list. I have confessed to be a KLK fan and a fan of Trigger overall but I’m saying this as she is one of my favorites in here because she’s a damn good motivator when you’re down, she’s a ride-or-die friend (and more) to Ryuko and she’s the type of friend that will let you live with her family and just oozes with awesome moments in the show from Fight Club Mako to the moments with her family to that part where they are getting pieces of Senketsu back.  But, yeah, Mako Mankanshoku definitely earn a spot for me.

AND THERE YOU HAVE IT!!! MY FAVORITE FEMALE CHARACTERS IN ANIME!!!

Until then, this is MAK2.0 aka The Blue Hybrid and now I wonder how this list will go…..