You know……in the past 6 years I have been doing the whole reviewing anime game and one thing that I have never asked myself…..who is your favorite anime characters?

I mean, I think other people might have asked me then but I can’t recall clearly but yeah, throughout the years that I have been watching anime, there has been a lot of characters in anime that I definitely gravitate to in different ways and that can be either how awesome there are, how relatable they can be or funny, adventurous, spirited in many ways, cute, adorable, attractive…..

Basically a lot of those aspects if you will and for this 2-parter list, I’m going into my favorite MALE characters first…..reason why as this is one list I had a hard time thinking…. mainly because while making this list, I have more female characters on my favorite female list than guys and by that, I mean I thought of 3 more female than male (and I had to make a lot of cuts on that one….you’ll find out soon enough.) and while I got some easy ones for me that I know I love, I had to search through my list on Anime Planet of anime that I have watched to find a male character than I like throughout and that stuck out to me the most.

This character……IS MADE WITH LOVE AND PEACE!!

What made me get into Vash as a character as his silly antics of running from….well, anybody who wanted that big-ass reward of $$60 billion does make him a damn hilarious character but soon into the series as we learn about his past, his brother, Rem……we get another whole perspective about him of why he’s a damn skilled gunman that never wants to kill but eventually the instinct is going to give in. It’s the both sides of Vash that makes him compelling as a character.

He’s smarter than the average rom-com lead….I would say harem lead but thankfully it’s not that type of anime. He’s the level-headed type of character that rom-com anime needs and yet it doesn’t make him a bland reverse stereotype. He’s abrasive but he has a friendly side to him that he show to his friends.

This prince is both a badass and as smooth as a motherfucker when it comes to the romance area and while I got another favorite character that’s on the other part coming, Zen makes a great male lead in both as the prince of Wisteria and as a romantic lead.

ALUCARD – Hellsing franchise (either one)

OK, no doubt I had to add him on my list. A charismatic, bona-fide crazy, powerful vampire with ferocious intensity in his attacks and God help you if you’re the guy fighting against him. In other words, you gonna die.

You know, a unkillable teacher that you have to kill before the end of the school year or the world will be destroyed does put pressure on a student….as for one, we don’t want to die and 2nd, when you get to know how damn funny a character Koro-Sensei and he makes to be a damn good teacher with these students, especially around Season 2 and oh boy….Season 2…hot damn, man. Give salute to the afro-ed anime characters because they will be more to come and with Favaro Leone… the rebellious bounty hunter who’s quite the ladies man, lies like a motherfucker and lives the lotto, “I do what the fuck I want”. He exudes that personality to a tilt in the first Bahamut series and it is a blast watching him on-screen from fooling around with rivalry with Kaisar (FAVARROO!!!) to the action involving him. So many things I remember from that show…..that I might need to watch the series again. 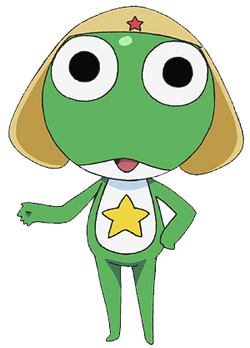 You know, I think all of us have been like Keroro a few times in our lives….like him, he is a very determined frog alien who wants to take over the world along with his platoon but at some days, he just want to be lazy, watch his anime, play with his Gundam and usually trick his friends into doing shit for him….and that’s what I like about him. He’s a trickster-type character and like those, they do ultimately gets what’s coming to them. 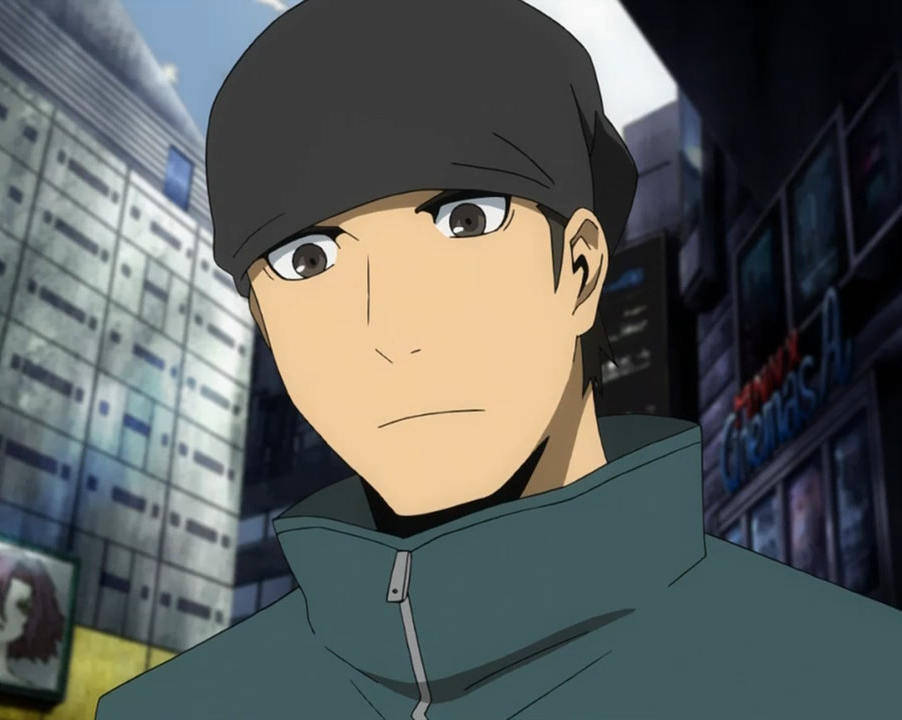 So…..let’s see…one of the members of the Dollars, former member of the Blue Squares, he’s the calm and collected type that can still kick your ass, helps out others including his friends, his crew and friends got love for the guy and he’s voiced by Steve Blum in the English dub? OK, he’s my guy. 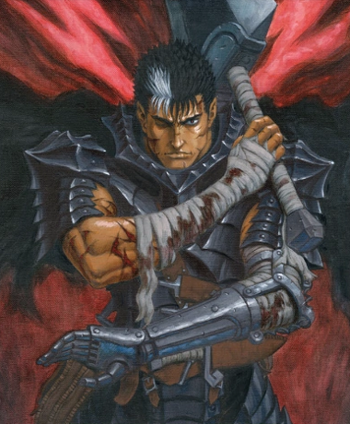 While I have noticed its anime adaptations throughout the years hasn’t aged gracefully in terms to animation, Guts as a character has always been the foundation of the series. A man who has been through so much shit in his life from having an asshole adopted father to joining the mercenary that is the Band of the Hawk only to have that bastard Griffith fuck that up and don’t tell me he did nothing wrong. HE DID EVERYTHING WRONG, the little bitch. Guts aka the Black Swordsman is a great definition of a tragic hero as you can see from the series to the movies (which I never got to the 3rd one but I know what’s going to happen anyway) and as strong as this motherfucker is and he is, like damn, that BIG-ASS SWORD DRAGONSLAYER….he worked for that shit. Like you see the struggle and the bullshit he went through to be what he becomes.

You know, until I saw this show, I was getting pretty tired of these OP characters that always manages to win at everything and how tension-less it always manages to get and how boring it is. One character that is OP and knows that being that is boring as hell….I can fuck with that!!! Saitama is that one character that can do that well and yeah, he worked for that shit as he did everything from 100 daily push-ups, sit-ups, and squats aka the shit most of us never want to do and shows frustration that while he is the strongest and can kill a villain with a single punch, that doesn’t make him the most beloved or popular. Hell, they show more love for Genos and Mumen Rider, which the latter does deserve for love and Saitama understood that. Also, whenever he does do his thing, it is so damn hilarious. I laughed so hard watching those moments over and over again. 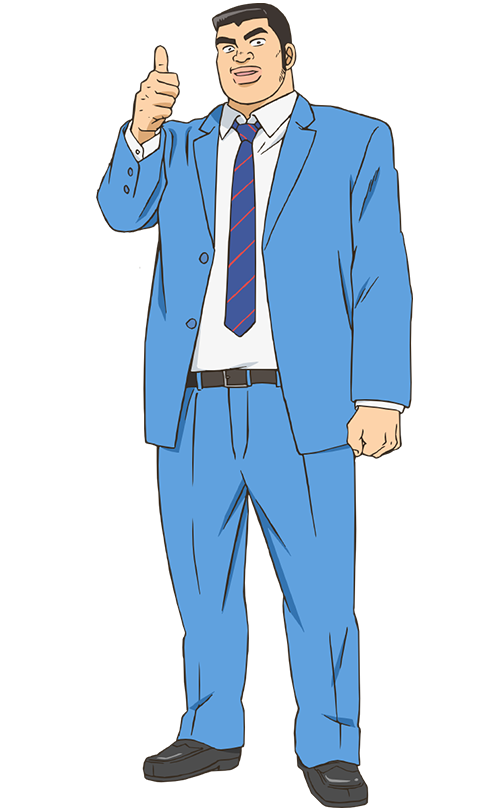 I had to choose him as one of my favorites considering at first, I wasn’t about to watch this series but thankfully I did and Takeo is just an oh, so wonderful character from start to beginning. You see him in an anime and think that ‘Oh, he’s a big motherfucker. He must be the sidekick or the best friend’ aka a role that would likely be the case for this guy and the lead would be some typical pretty boy motherfucker but…..nope, Takeo is the lead and he’s charming, helpful…..just an all-around great guy and to see him fall in love and get the girl within 3 episodes instead of doing the “Will they, won’t they?” bullshit is very satisfying.

Deku is a damn hero and a damn good character!! Yeah, I said it. To me, he is the underdog that you really want to see succeed in his life as he was born without a specific quirk and he got shitted on for that but when All Might sees some potential in him and behold….but the journey still continues with him in Season 2 and spoiler alert! I’m enjoying it so far and it’s practically a shoo-in for Top 5 favorite Anime of 2017. 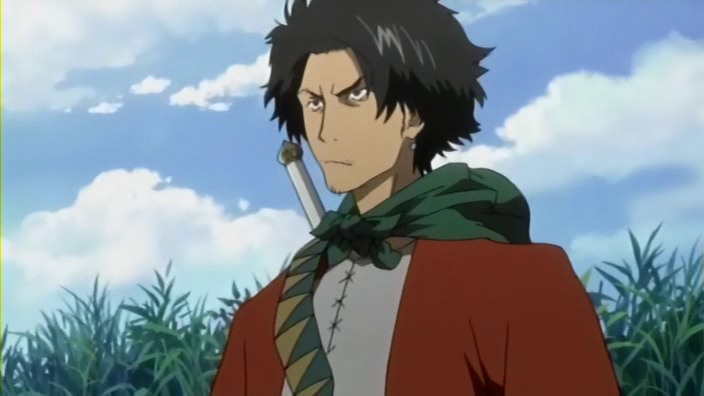 OK….so this is what if Johnny Bravo was an anime…that was directed by Shinichiro Watanabe and Shingo Natsume (well, he’s also a director in here, too) and in space…..
Maybe that’s going too far off but you see some points right? OK, he may not be exactly all that bright but the guy does make up for that with a lot of style, charisma, charm, comedic timing, an strange and appealing personality and of course, the love of…..the BOOTY!

A bit obvious but fuck it. To me, this is the quintessential cool guy anime lead that’s not just the traditional type of your typical ‘I’m strong as fuck but an moron’ or ‘I’m a asshole hothead lead’ anime character. Spike Spiegel is more apathetic and indifferent as a character yet it doesn’t come across as being an asshole or anything like that. I mean being a bounty hunter isn’t exactly the high life and you’ll be ornery like him, too, when you got no meat in your place. Shit, I go insane without any meat. 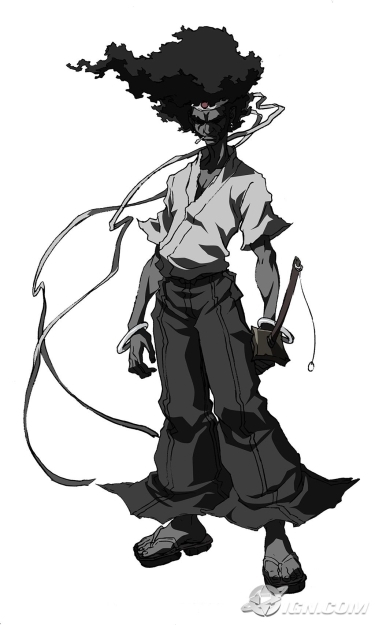 Yep, you damn right I choose this guy. This is a character that I would’ve made if I was still a teenager and yet there are a lot of aspects I like about Afro Samurai as a character that’s not just him killing a slew of motherfuckers. For one, he’s a man with few words and goes more by his actions and that’s a trait I highly appreciate throughout the years. Another thing is while he does try to move on from past tragedies and incidents, it still lingers on in his mind in a way.

And there it is!! MY FAVORITE MALE CHARACTERS IN ANIME!!!

MY FAVORITE FEMALE CHARACTERS will be posted sometime in a few days or next week.

Until then, this is MAK2.0 aka The Blue Hybrid and like I said, I had to make some cuts on that following list