Hey, a movie review!!! Yeah, I haven’t done this in a while….although I thought I mentioned I wasn’t going to do much of these this year. Oh well……and yes, it’s another Marvel Cinematic Universe movie and it’s a sequel to one of my favorite movies of 2014 and the one I liked more than Winter Soldier. 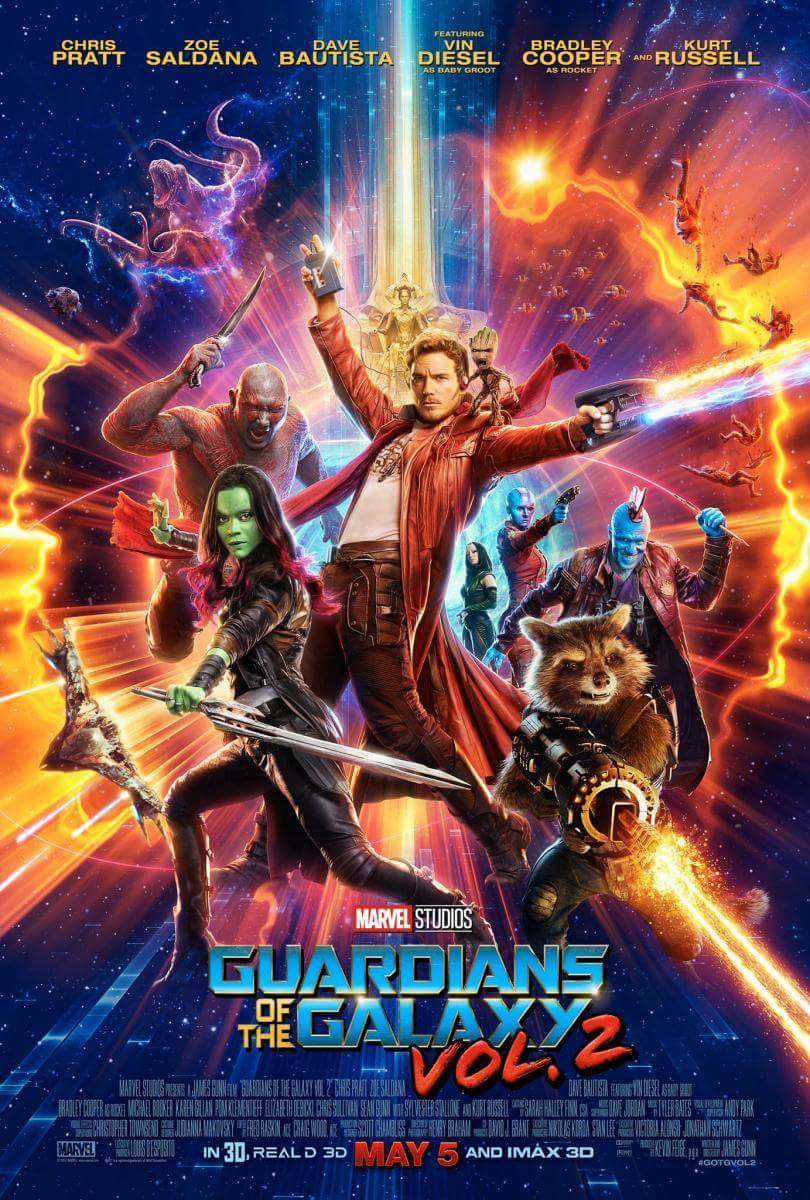 Peter Quill and his fellow Guardians are hired by a powerful alien race, the Sovereign, to protect their precious batteries from invaders. When it is discovered that Rocket has stolen the items they were sent to guard, the Sovereign dispatch their armada to search for vengeance. As the Guardians try to escape, the mystery of Peter’s parentage is revealed.

So did this sequel ended up being a movie that blew our minds? Or waste it? Is it another Avengers 2 where we liked it but we wouldn’t put it as top tier?

Well, guess what?
THIS SHIT IS GREAT!!! I LOVED EVERY MINUTE OF THIS MOVIE!! I DEFINITELY WOULD WANT TO SEE IT AGAIN!!

But— it is better than the first one? Well, I wouldn’t say that. You do get the same vibe you get when you watched the original the first time and I didn’t find anything that was better than the first one yet I can say that they are equal with each other in my eyes. I do say that I still loved the comedy throughout and I was laughing my ass off during those moments and again, it never felt out of place for it to happen.

I will say there is more emotional character development or expansions through characters like Drax, Nebula and especially Yondu. Oh man, Yondu got his fair share looking into him more as a character and Michael Rooker’s performance as him is a great highlight throughout the film. Another great highlight was Drax’s comedic performance and Dave Bautista killed it here and I think it definitely surpasses the performance he did here. Bradley Cooper also did good here again as Rocket and so did Vin Diesel as Baby Groot aka your adorable factor in the film and also it’s the best performance Diesel did this year and that’s not saying much looking into his other movies from this year.

But what about Chris Pratt and Zoe Saldana? They were fine, too, although I think Chris Pratt doing dramatics is a bit eh on me. It’s OK but I think his comedic charms excel him more. Kurt Russell especially did damn good as Ego and damn, Disney got some good tech on making the younger versions of their older stars. Where the fuck was that when Tron: Legacy was made? Also, despite her role not being as much here, I did like Pom Klementeff as Mantis and hopefully there’ll be more of her in Infinity War.

Oh, and since I don’t want to reveal too much, we got two-to-three sets of villains in here and yet while the other one is a surprise I’m not spoiling (and yeah, I know some comic-book fans will know but this is for the movie-only people here) but Ayesha and Taserface were blah as villains. Maybe not as blah as Ronan was but still they felt like an afterthought. Actually, that’s especially the case for the former but the latter did have some good moments…..especially the comedic ones.

FINAL VERDICT: Overall, while this is more of a been-there, done-that type of movie, it still retains what made the first movie so great (i.e. the comedy bits, the action sequences with a hint of weirdness added in) and the character development expansion was also a nice touch in there as well. Is this still worth seeing in theaters? Yeah and like the first movie, I didn’t spot anything that felt connected to the MCU. I know it’s connected but it felt like it’s own thing.

So, this is definitely an….

I’m MAK2.0 aka The Blue Hybrid and I don’t think Mantis would want to read my palm.