So, yeah, this is a digital shorts episode……the 3rd digital shorts in the series and yet the first I’m going to look at today. Yeah, there were earlier digital shorts of this but this one counts in the episode listing so here we go. Also, can’t find any clips or screenshots of the episode so don’t expect much in this one. 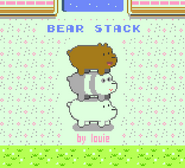 The bears heard there was one copy of a video game they wanted so they hurried to get there before anyone else can. The highlight of this short is that it is done like a RPG videogame from the obstacles, the power-ups and they have to fight Nom Nom to get to the game. Yet they forgot to get $50 to pay for the game.

Ice Bear is frozen and Panda and Grizz tried different ways of getting him thawed. Nothing works……except a single tear. Yeah, that was stupid. NEXT ONE!

The bears order a shelf for their TV but instead of getting someone to assemble it for them, they do it themselves. Did it work for them? …….No.

It’s COOKING WITH ICE BEAR. He makes some Korean Party food. That’s it. Shit is still great, tho.

A ruckus is going on in the cave at night…although it’s told from outside of the cave instead of being inside. I get that whole part and the more I remember it, it’s actually quite funny.

And now RANKINGS FOR THIS SHORTS:

Yeah, not much of a review or re-cap but hey, these are shorts and well…..there isn’t much to say on these. Well, except that they are funny for the part being although BEAR STACK is the top favorite due to how creative it is.

I’m MAK2.0 aka The Blue Hybrid and…….well, see you in another 3-4 months or whenever the show comes back.