So……..I can’t do Rage of Bahamut: Virgin Soul nor Re:Creators due to reasons (reasons I have stated numerous times and kept plugging) and hearing how the first episode of each of these is good is bittersweet in a way and so…..today’s new anime to look at is…….

OOOOHHHH!!!  OK, what it is called in Japanese?

*sees the original Japanese title*
OH, FUCK! COME ON! I’ll use the abbreviated title then.

This is SukaSuka. (Yeah, I know it sounds like Sucka, Sucka but I’m not typing that shit again. Or it is pronounced like Soo-Ka, Soo-ka?) 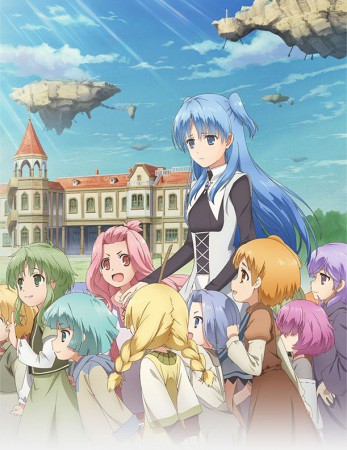 Plot Summary: Humans have been driven to extinction by “Beasts.” The duty of fighting the Beasts fall to “Fairies,” who are destined to use their powers to wield “Holy Swords” called “Kariyon” and eventually meet their destiny of death. A sole human being named Willem wakes up after several hundred years, and continues his fight against the Beasts.

First Thoughts: OK……I thought the first episode didn’t do much to impress and looking at the premise again, this looks like one of those titles where it’s 80% slice of life with the remaining focusing on the adventure aspect. In other words, this is quite reminiscent of last year’s critically acclaimed hit with fans Grimgar of Fantasy and Ash (or Grimgar: Ashes and Illusions) but here’s the problem with that: I’m one of the few that hated Grimgar for that and also for how it feels so artificially tragic and overly melodramatic and the first minute felt so crammed in with what happened then and the whole “YOU’RE A HUMAN! DIRTY HUMAN!” spiel felt so short and the other element just got me dozing off most of it. Granted, unlike Grimgar, I’m not annoyed by the cast….yet but right now, this is definitely on a low priority watch for me as I feel like it’s another one of these shows that will get buzz slowly and yet I’m the one guy that doesn’t get it.

Well, unless other show debuts this week, this is where the gravy train makes its last stop. There were other shows I definitely wanted to check out but alas, it’s out of my reach. So with that said….

I’m MAK2.0 aka The Blue Hybrid and seriously, what’s with this long obnoxious-ass titles?