Well……..I can’t watch Little Witch Academia because since Netflix got it and it’s 2 split-cour, that means I have to wait until April to watch it. Yet at least it’s not as bad as Scum’s Wish and Onihei only being on Amazon and they recently announced something called Anime Strike, which you can pay $5 if you got an existing Amazon Prime account or with that……yeah, paying double for that. No thank you.

I guess I don’t have a lot to review this season. Good thing, too. This season is some ASS! and I don’t know what to close it wi—

Wait…..you’re back?! I THOUGHT YOU WERE GONE FOREVER! HE LIVES……I think.

This is Koro-Sensei Quest. 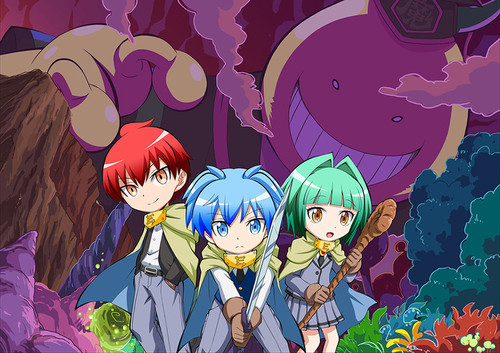 Plot Summary: Get ready for a strange but fun-filled adventure with your favorite group of assassins. The killer class is back but this time they’ve got…magic. In this brand new spin-off series, follow the chibis of Class 3-E as they learn swordsmanship and sorcery at Kunugigaoka Magic School. Their mission… Defeat the evil Demon King Koro Sensei and face the trials and perils of their magical school.

First Thoughts: So…..this debuted last month on the 23rd and if you wonder why I took this long to look into this. Well, one, it was in the middle of December aka Christmas time aka LIST TIME meaning I got no time to look into this and two……I’m looking into the English dub of this. Yeah, I can do that shit and……well, there really isn’t much to say on this except if you love the comedy antics in Assassination Classroom, then you might like this full comedic spin-off. Oh, and I do like that the aesthetic is like a 8-bit old school video game……well, sorta. it’s still animated like the series, the opening and ending give it that vibe and……

So that’s about it for Time of the Season and the winter season is not looking impressive so far. Will it all change during the next 2 months? Well, as usual, check my Twitter on that.

I’m MAK2.0 aka The Blue Hybrid and yes, there’s a buff Nagisa here.