A fat kid that would later lose all that weight and has girls swoon and talking to him…..yet he’s infatuated with this one girl.

Um, buddy, if that happened to me, I talk to all the swooning girls and forget that other one.

Yeah, this is Masamune-kun’s Revenge. 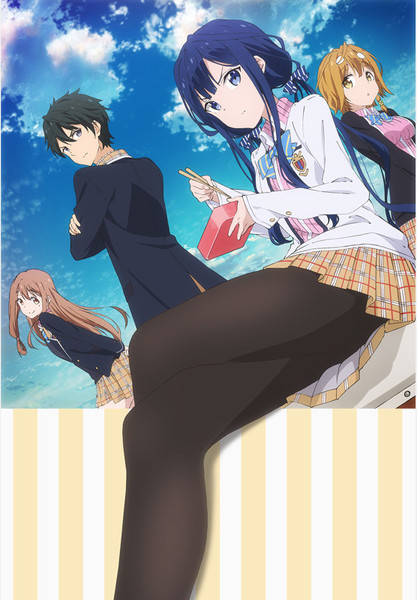 Plot Summary: Masamune Makabe was mercilessly teased for being overweight as child, especially by a girl named Aki Adagaki. Masamune decides to get his sweet revenge by transforming himself into an attractive, intelligent, and athletic young man. After many years honing his new persona, he transfers to Aki’s school in hopes of finally getting his long-awaited vengeance.

First Thoughts: Um…..the hell is this? So, this guy that used to be fat but now he looks like…..well, the typical Japanese school boy that has a lot of girls talking to him and he definitely doesn’t want to go back to that way, even to avoid some high-calorie foods….or do a lot of exercise after eating them. OK, on one hand, I do get trying to re-invent yourself so you’ll have a good point in your young life and this guy Masamune shows up and despite him freaking out over food and stuff, he’s doing alright for himself…….but there is one thing I don’t get. He wants to get close to this girl named Aki aka The Cruel Princess, who will out a motherfucker for having a mole or writing self-insert fantasy fan fiction, since he did met her when we was fat and she rejected him…….now he wants revenge on her by……getting close to her?? Um…….boy, you do realize you got a bunch of girls kind and friendly to you and finds you attractive? But you want to waste your time with this girl who doesn’t give a fuck about you although I think she knows who he really is.

Yeah, this is probably going to be another cheap “romantic” anime where our leads are an ungrateful former fat kid and a princess of a bitch…Oh joy. Yet I want to see if both of them get taken down a peg. I wish for that to happen here.

But until then, I’m giving this The 3-EPISODE TREATMENT. I don’t have high hopes for this one so I’m playing this safe.

Until then, I’m MAK2.0 aka The Blue Hybrid and…..I would comment on how his mom looks younger and smaller than him but I forget….ANIME!