Usually, I would have this up 30-45 minutes after the episode has aired but the latest episode of Steven Universe kept me occupied and then followed by forgetting that I do these posts every week whenever a new episode airs.

Anyway, getting back on to schedule.  This week’s new episode is centered around Grizz.

Yes, this is a Grizz episode. *locks all the doors*
And with that settled, let’s get to what’s the episode’s about.

SYNOPSIS:
When his brothers don’t need his help for the day, Grizz leaves the cave to help anyone in need.

So Grizz feels like he wants to help around and do something but of course, his brothers really doesn’t want his help (especially Ice Bear, who just fixed his Roomba-ish robot. So is Icy Nights Pt. 2 going to happen now?) and so what’s a Grizzly Bear going to do now? Well, Craigslist is still a thing and he offers to look for help around the city. First, he offers his help to pick up garbage around the city and as he does, he spots an old lady who is searching for his missing chicken named Mark (shut up) and of course, he takes up that and as he does, he runs into a bunch of dogs this guy is taking a walk for. Again, Grizz volunteers to help him out and as he does, he finds a building where the chicken is held captive by some guy who is trying to build/test a time machine with a microwave and…..

OK, is this supposed to be an American version of Steins;Gate? Because this is what I’m seeing here.

Anyway, Grizz and the dogs tried to trick the guy into giving up the chicken and as usual, the trick doesn’t last long but he ends up getting the chicken, returning it to the lady along with the dogs back to the guy and gets a ride home from the garbage men.

Oh, and I said before the music felt like it was vibing A Tribe Called Quest……yeah, I meant to say it was more Naughty By Nature. At least by the tone of it. 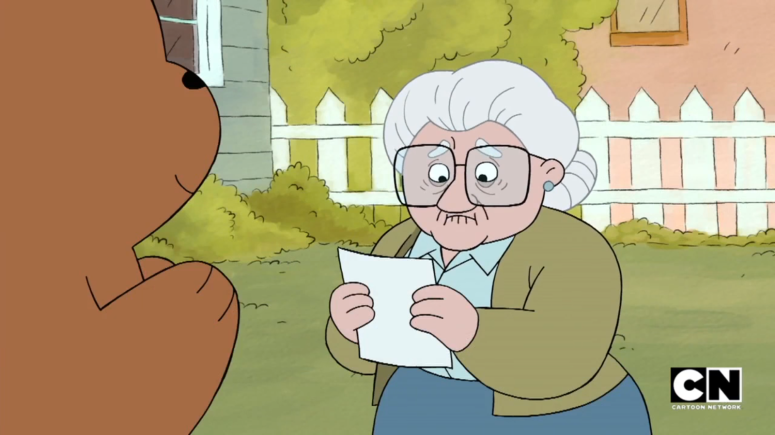 FINAL VERDICT: OK, this one isn’t too shabby. Grizz wanting to help out a few people around the area is an OK idea for an episode. The weird transition into the time-traveling machine added an interesting punch to the episode as a whole and made it kooky but even with or without it, it was still a rather alright episode.

And that does it for this round. There is going to be a new episode of WBB (A CHRISTMAS SPECIAL AT THAT!) the week after next week as it’s taking a break and……there’s a Teen Titans GO! Marathon on CN for the Thanksgiving Weekend.

Yeah, you know my feelings on that.

Anyway, I’m MAK2.0 aka The Blue Hybrid and….at least they didn’t try and do a version of Chaos;Head….or Occultic;Nine.