OK, once again, we get another Ice Bear-centric episode on We Bare Bears and this one……we did get a sneak peek of what’s to come in this episode. In fact, visuals speak for themselves.

Uh-Huh…..already this looks sweet and now that I saw the episode….what is it really about?

SYNOPSIS:
Ice Bear‘s custom vacuum mobile gets stolen by a gang of techies, and he must navigate the city‘s underground world in order to retrieve it.

So Ice Bear went out in the night to get some stuff from the local convenience store and some tech douches (fuck it, they are douches) are checking out his ride (well, Roomba basically) and they want to buy it from him. He obviously isn’t selling but they steal it anyway. So, Ice Bear must go into the underground world of……..Robot Fighting to retrieve it but he got caught by the head tech douche and order his Roomba to fight him but didn’t count on them freeing Ice Bear and not kill him……but all the other robots came out to battle and destroy them both and alas, poor Roomba was injured during that fight.

Furious with rage, Ice Bear defeats all the robots and the rest cowers out of there but as Ice Bear faces the head tech asshole, it was delivered he was a hologram.

In one hand, damn, I wish Ice Bear would have kicked his ass but on the other hand…….I hope there is another episode like this or a sequel to follow because……

FINAL VERDICT: I love this episode and instantly this became one of my favorites and yes, it has something to do with them basically doing a homage to Drive. Yes, the Nicolas Winding Refn movie that starred Ryan Gosling as a nameless stunt driver by day and gateway drive by night and the episode does make a few references along with its 80s’ aesthetic, the vibe you get from these moments and also the music. I know when you heard some of the music here, you didn’t think of “Nightcall” or “A Real Hero”……..that and yes, I am a nerd for knowing this shit but who cares? Drive was an awesome movie. There is other references I can think of in here like Tron or Battlebots or even Kill Bill for a little bit during that robot fight sequence.

I’m not sure if many people will get some of the references here but for those that do, this was a cool episode and now one of my instant favorites. I see myself watching this many various times.

I would say I wish Ice Bear would have stomp on that guy’s head or get a hammer but…yeah, it’s Cartoon Network. I don’t think that is going to fly here. 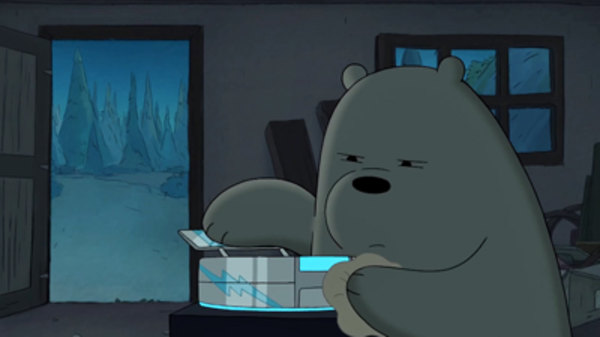 I’m MAK2.0 aka The Blue Hybrid and Ice Bear is one real bear being and a real hero. And now I want to listen to the Drive Soundtrack again.