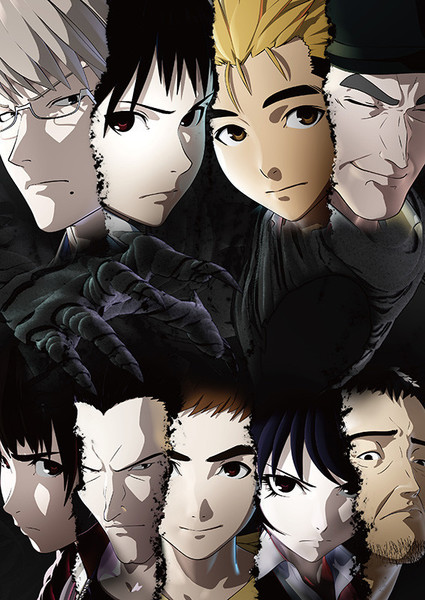 Hmmm……this is the first time I look upon a horror title since Wicked City of last year.

OK, to tell you the truth, I am not that big on anything horror nowadays mainly because it’s divided into two sets: the cheap annoying jump-scare horror that easily-scared teens well go for and the cheap artsy and visual style horror that easily-scared adults will go for. Neither have been impressive to me as I’m either annoyed, angered and/or disinterested in it but that’s mostly with live-action movies.

However, with anime, I tend to favor more of it depending on the show or movie as a whole turns out like. I mean, I did enjoy Tokyo Ghoul and Parasyte when they first aired the last couple of years but now we are on to a new subject that’s…..sorta human.

17 years ago, immortals first appeared on the battlefields of Africa. Later, rare, unknown new immortal lifeforms began appearing among humans, and they became known as “Ajin” (demi-humans). Just before summer vacation, Kei Nagai, a Japanese high school student is instantly killed in a traffic accident on his way home from school. However, he is revived, and a price is placed on his head. Thus begins a boy’s life on the run from all of humankind.

All right, what we got is Kei on the run with his friend Kaito and of course, people out there want his head because he is looked upon as a monster that could endanger everyone and most of that is true depending on the person. The concept of an Ajin is notably alluring to the viewer with it being immortal and the hunt for it does draw interest but after watching all 13 episodes……it’s not something that’ll stick to you. You get the initial start of being founded out, police officials ask questions regarding Kei, and of course, people trying to beat and kill you although you’ll end up offing them instead. There’s also finding out the truths in most characters and we all know how the story goes. Something like that can be done well and it did…..it was Tokyo Ghoul and maybe Parasyte in a few of its episodes. Here however….it does get your attention now and then but after a while, you get detached in the latter half that you stop caring and just tune out from the show.

It also doesn’t help that your main character Kei Nagai is part of that reason. His whole situation with him being an Ajin is quite weary. Kei is your average vanilla Japanese high-schooler and that’s about it. I could explain more about him but he’s not that interesting to get invested in. Yeah, he’s an Ajin and all that but other than that, he is a bland lead and his friend Kaito isn’t all that better either. With him, it’s protect Kei at all costs even if it means dying to protect him……except Ajin are immortal. Even if his ass is kicked or killed, he’s still going to be alive so the tension of that is lost on that.

The other characters might be worth more giving a damn about than the main one and that isn’t just by comparison. The main villain Sato or “The Hat” is one of the menacing parts of the series especially with that disturbing smile on his face and his twisted ways of getting his victims. Oh, there’s Tosaki and Izumi Shimomura, the two officials and they played an important part that was more substantial than our leads.

OK, let’s get this out of the way.
Yes, this CG animation is not all that great and we know the ones responsible for it is Polygon Pictures. The same studio responsible for Knights of Sidonia and like that show, the animation is decent here and there with some good animated action sequences although it does look poorly rendered and the art looks clunky at best. I don’t mind 3DCG animation because I don’t always want the generic pretty-looking style because it would not fit in something like this and the problem is that the aesthetic’s flaws are very noticeable. Plus, the actual Ajin design looks like an unfinished mummy before adding the rest of it.

Music in here is about as typical as you expect from something in a horror title from the Gothic organs to its guitar riffs. It’s effective in a few times but nothing memorable you want to listen again or care to research most of it. The opening theme “Can You Sleep at Night?” (Yoru wa Nemureru kai?) by Flumpool and ending theme “HOW CLOSE YOU ARE” by Mamoru Miyano really doesn’t have much of a grasp when it comes to strong presence in listening to them. They do have a good fit within each beginning and end of the show but in the end, you would want to skip both of them.

The English dub (of course, courtesy of Netflix) was an OK effort on the actors’ parts and did the best they did. I will say some roles are typical for these actors, particularly Johnny Yong Bosch and Bryce Papenbrook as our leads Kei and Kaito. Yes, these two are paired up again as hot headed teenagers although Bosch does a good sociopath range different from Izaya in Durarara and for Papenbrook, this is one of his more calmer roles (OK, not that calm). Two other people I’ll give notice to is Cristina Vee and Todd Haberkorn as Izumu and Tosaki, respectively as they also did a decent job in their roles, especially with Haberkorn.

FINAL VERDICT:OK, Ajin is nothing to write home about. In fact, it’s nothing you’re going to remember after you’re done watching it. It’s a by-the-numbers horror supernatural anime with an uninspired and drab lead with a situation that could’ve been good but unfortunately at the halfway, you started to not care anymore. Good thing at the time of this review it’s on Netflix because it’s something you rather just stream on your computer, game console, TV than own on physical format.

Ajin: Demi-Human is not immortal to me- it gets a

As of now,  Ajin: Demi-Human is only available to stream on Netflix exclusively. No plans for a home video release has been made yet.

The big 150. A review so top secret that I don’t know what to review next.

No, seriously, I don’t know what’s next.