Today, the bears further into one thing that we humans tend to dread or at least 50% of us.

Going on a diet.

Actually, better yet, a cleanse.

SYNOPSIS:
The Bears try a “cleanse” to improve their health, but Grizz runs into trouble when he realizes he can only eat what grizzly bears eat.

So in the episode, the bears are instructed to eat what they are supposed to be. Examples being Grizz has to eat fish and berries (which doesn’t seem all that bad IMO), Panda eats bamboo (yeah, I would go crazy if I had to eat only that) and Ice Bear has to eat seal (Oh, we’ll get to that later).

At first, things are okay with Grizz’s part but Panda couldn’t stand eating only bamboo but…..as he posts a pic of the bamboo on Facebook(?)….Instagram(?)…Facestagram, I think(?), he gets 22 likes and his follower count has risen so he figured he post that health food shit a lot and his social media status will grow. With Grizz, soon he gets sick of this cleanse as he craves junk food and starts seeing things that make him more hungry than before. Panda would help but he’s too busy cheering over his growing social media status. 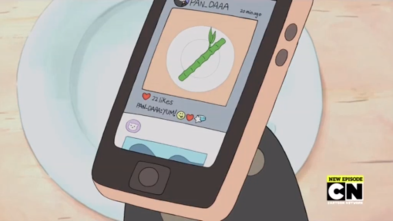 Too bad in the end, Panda was a CHEATER!!!! Grizz caught in the act eating chocolate cake and Grizz was right to be pissed off. I would, too, only I do worse things than he would. He threatens to post the pic on his profile. They fight it off trying to get the phone, they get hurt but Panda accidentally post the pic and of course, he’s hated and people are disappointed at him.

With Ice Bear, he’s basically trying to eat the seal but he can’t. One look at that seal’s face and he realizes….that seal is too cute to eat.

I’m not the only ones. Cedric_alpha and KrisSimsters (also from Swim Squad) agree to this:

That seal is so cute!! #WeBareBears

Awww, it's too moe to eat now #WeBareBears

The seal is Ice Bear’s precious CinnaBon in the world. Hell, this is moe seal!! More moe than any anime girl (basically, your waifu) in this season’s anime simulcasts. So they spend a lot of time together, playing basketball but eventually the seal needs to get back in the water and live its life in the sea, not without a heartfelt goodbye.

So, yeah, I liked this episode. This one is practically in my top favorite episodes of the show in terms of being their standard episodes of them fooling around and the few times I like all the three separate characters’ arcs.

Oh, and I think the lesson is…..well, cedric_alpha will fill that in.

This has been MAK2.0 aka The Blue Hybrid, and you know what? If KyoAni made a moe seal anime, it’ll be the first time in a long while I cared about them.