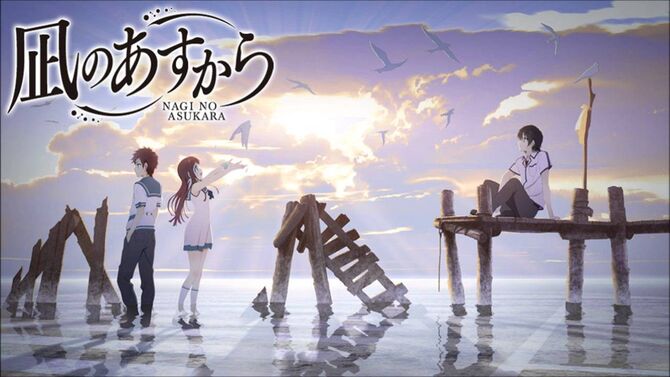 Recently, I have said that I haven’t been keen on recent slice-of-life anime mainly because their examples of mundane experiences of everyday life have been……well, not that interesting or endearing. But there is something about this particular title that has an element or two going for it but we’ll get to that once we’re into the review and a funny thing about this one. This also premiered on October 3, 2013 i.e., my birthday and I never talked about this title the way I talk about another anime title that prepared on the same date…….

….yeah, because I liked that anime more than this one I’m reviewing and that’s not to say I hated this title. Anyway, A Lull in The Sea  by its plot and aesthetic does sound like any other typical slice-of-life anime by the looks of it but there’s something about it that does intrigue in a different way.

Long ago, humanity lived in the sea. But the humans who longed for the land left the sea behind. They cast aside the special raiment they’d been given by the sea god that let them live in the ocean. The thinking of the sea humans and the land humans became as separate as the places they lived, and as countless time passed, they forgot they were once one people. This will change as the land-dwelling human Tsumugu Kihara befriends four students who live in a village at the bottom of the sea.

The first thing I liked about the show right out of the bat is that the whole divide between the land and sea humans. It’s really identical to what most of us already know in the real world: racism, prejudices, and discrimination since you get things like the land kids calling sea kids fish people and writing something identical to GO HOME, [BLEEP!] and seeing how these 4 sea kids struggle with that along with getting a land human ally (that does complicate things for them some of the time), overcoming adversity with some people and also getting into some heavy shit such as relationships among the characters (Oh, we will get into that shortly) and how the saltflake snow might be dangerous to the surface. Another point for this is it’s also a coming-of-age story in some parts regarding some of the minor characters that eventually get the spotlight later on and to some extent, it does work.

Yeah, some of these didn’t start out feeling forced but after a while, it left me thinking, “Did we really need all of that in there?” Yes and no. The romance was fine but in the end it added too much to what was already working for them.

At first, I didn’t really care about most of the characters of the show as they started out a little bit annoying but as the show went on, they have progressed greatly into their own characters despite having a certain type in the beginning. Hikari (the main guy) was the one I initially was annoyed by because of his brattiness and tsundere-like behavior (yes, tsundere are not my favorite anime trope) but he does come around as decent. Manaka’s and Chisaki’s development as characters came pretty early on into the show when the love whatever starts. Kaname is practically the one I mostly felt bad for in the end and some of the beginning, too, since he was portrayed as the standby character who’s just there and yet even the character knows it. But at least he has somewhat of a personality while Tsumugu, the land student, is the blank surrogate of the group. He’s there because of……convenience, I guess? If I had to say any favorites I got from here, it would be Hikari….’s older sister, Akari, who I did liked since the beginning of the show as she had to deal with playing mother when the child don’t accept you as that and being romantically involved with a man from the surface, disobeying the village rules. Miuna and Sayu also grew to me, the former more than the latter as Miuna trying to deal with her dad being married to Akari and what I mentioned before.

P.A. Works is the ones responsible for the animation and no surprise here, the visuals are stunning, vibrant and impressive to the keen eye and probably one of the reasons (or sole reason) why most people checked this one out. P.A. Works has the same praise for animation quality as Kyoto Animation has except P.A. actually has more variety into their catalog. As for character designs, you got the standard cute moe big eyes character for the main ones and that’s mostly it.

Musically, you see why the show is call “A Lull in the Sea” because the music is actually calming and soothing but enough to keep you awake and focused on the show. The opening themes “lull ~Soshite Bokura wa~” & “ebb and flow” both sung by Ray are melodic and light-hearted once going into the show. Ending themes “Aqua Terrarium” & “Mitsuba no Musubime (三つ葉の結びめ;Knot Made of Three-Leaf Clovers)” by Nagi Yanagi are moody yet inspiriting set in the right place after an episode ends.

Now, as for the dub provided to you by Bang Zoom, I got one thing to say about it.

I’m classifying that as a good thing as this dub is solid in the acting department as the actors convey a lot of emotion into what they got to perform with. I’m really impressed with the performances from all the cast around. The main 4 (or 5) consists of Max Mittleman (Hikari), Michelle Ruff (Manaka), Brianna Knickerbocker (Chisaki),Bryce Papenbrook (Kaname) and Chris Hackney (Tsumugu) and all of them did their best, especially Ruff and Knickerbocker (whose performance really got to me the most).The other two MVP in the anime regarding performances is Erica Mendez (Akari) & Xanthe Huynh (Miuna) as they delivered one of their best emotional performances in an anime

Also, you’ll hear Chris Niosi as a perverted sea lord that loves himself some sake.

FINAL VERDICT: A Lull in the Sea is a serviceable show that has its heart in the right place and for what it does, it succeeds but when they added too much (the love octa-whatever) of what was already good, it became too over saturated with that element. Still, the show is worth watching once if you’re in the mood and if you like this type of anime, you might consider it to be in your collection later on in the future.

So, does the Lull make me relieved or did it get tampered with?

A Lull in The Sea (or Nagi no Asukara) is available on Blu-ray and DVD from NIS America (and yes, this is their 2nd release with an English dub from them). You can find it streaming on Hulu and Crunchyroll with the latter having both SUB and DUB format.

As usual, this is MAK2.0 aka The Blue Hybrid and I just did another Valentine’s Day related anime review.
….I’m gonna eat chocolate now.

A LULL IN  THE SEA – animation by P.A Works / licensed by NIS AMERICA