I have said this before many times whether it be on my reviews or my tweets that the fantasy genre doesn’t hold much interest in me. I have never been the type that’s been into stuff like Game of Thrones, Lord of the Rings, Dungeons and Dragons or whatever medieval fantasy stuff people like but yet when it comes to anime, there are some shows like Berserk, Snow White with the Red Hair & Garo comes to mind that I actually like or love.

This next one I’m talking about is something I never would have thought I would watch in a long time. Some say that it would be a SIN to miss out on this.

What is the show about?

In a world where humans and non-humans have not yet been separated, the kingdom of Leones is protected by the Holy Knights, powerful magic users both revered and feared by the people. Supposedly the strongest, most fearsome of these knights, the Seven Deadly Sins, betrayed the kingdom and made enemies of all the other knights. Queen Elizabeth doesn’t believe this story, and sets out to find the Sins – but when she meets the first Sin at a tavern, his name is Melodias, and he’s nothing but a boy in charge of the pigs.

Plot sounds like any other fantasy anime, right?
WELL, IT IS!!! It’s a fantasy shonen adventure that introduces a lot of characters and we get to know their backstories and what makes them who they are with moments that seem like they are headed for certain defeat or death but gets saved at the last minute by some deus ex machina or a miracle by some chance thanks to the overpowered fights that seem to go on forever along with many comedic moments that balances the tone from being either too dark or too comically stupid.

Only thing is…..I’m fine with this. I was really getting into the show because it has a sense of engaging adventure and anticipation that makes me want to keep on watching despite a derivative story. Other shows similar to this have tried but aren’t so hot in their execution as this show is proof that you can make an idea that isn’t wholly original but make sure it’s entertaining enough for them to keep watching. 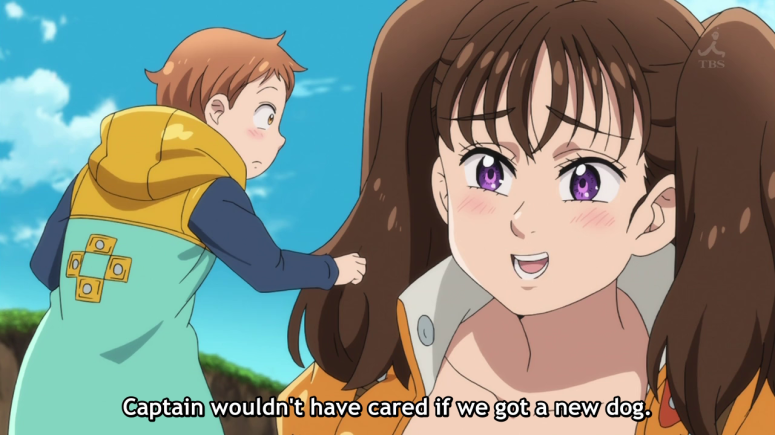 But what really made the series for me are the characters and all around they are the most enjoyable aspect of the show even with most of their annoying kinks in there. First, I’ll start with our leads Melodias and Elizabeth, respectively. Melodias is our first one we encounter, the sin of Wrath and he’s the basic energetic headstrong OP protagonist of the show and while he may be an overpowered character, he’s not boring to watch. If you can make your overpowered character at least have a good personality (and not be a boring or bland drag), then you’re good by me. Elizabeth is far more interesting as she sets her sights into finding these guys and gets a good amount of development as the show goes on.

Although, I will say Melodias’ perverted humor to Elizabeth (him groping her for example) does start to lose its luster halfway through the series but never once I thought of “Man, this shit needs to stop” but more of “Alright, dude, we get it. Stop. It’s getting old and not as funny.”

The other sins got the most development (well, 3 of them anyway – Gowther and Merlin are mostly near the end and well, they aren’t exactly spotlight stealing) into the show. The most particular ones being Ban (the fairy king), King and Diane (a giant woman – and yes, I’m not the only one thinking of this song) and the latter two happens to be my favorite characters on the show along with Hawk, the talking pig as he definitely gets a lot of laughs from me when he’s around the Sins. Going into the past of both King and Diane really made me love those characters even more and made me care for what happens to them even though we all know they’re going to live anyway but still it manages to show us characters we care about and yes, the same can be said for Ban’s backstory as well.

Now with the animation and for the first time in a while, this is an A-1 Pictures anime that I actually like. The animation honestly reminds me of Magi, another anime based from a manga series that I actually like and like that show, and it’s colorful, bright with fascination artwork, has some weird character designs at first but I did get used to it. Fight animation was integrated well into the show and it mostly fits the standard of shonen action scenes in shows like this. (ex. Fairy Tail –hey, another A-1 Pictures show!) So, yeah, the animation was fine.

Since I kept mention typical, here’s another one for you: Hiroyuki Sawano composed the score for this and like any other score he does, it has that epic feel although slightly generic at this point if you hear most of his work and it fits the context of the show to say the least. The 2 opening themes were serviceable at best while the first one “Netsujou no Spectrum (熱情のスペクトラム)” by Ikimono-gakari was good, I did like the second theme “Seven Deadly Sins” by MAN WITH A MISSION and that’s the group that did the themes for Log Horizon and as of this date, the opening theme for Mobile Suit Gundam: Iron-Blooded Orphans so they know how to pump someone up for the show. Ending themes “7 -seven-” by FLOW x GRANRODEO (eps 2-12) & “Season” by Alisa Takigawa (eps 13-24) are decent enough but not enough for me to recount as sometimes I just skip them.

Now for my favorite part of this review…….Yes, it’s the dub. There is a dub for this and not only that, it is also the 2nd anime to exclusively stream on Netflix, the first being Knights of Sidonia and a third one Ajin: Demi-Human coming soon.
OK, I know when most of you heard when watching the first episode that you heard Bryce Papenbrook as the lead (again) Melodias, you aren’t too hot on it. Honestly, it fits him and I think he sounded a little different in pitch than his work on Attack on Titan and Sword Art Online but he works well in here.
Erika Harlacher as Princess Elizabeth (and second role this year playing a princess) as an outstanding performance from the actress and brings charm and compassion into the character. Cristina Vee as Hawk definitely made me love that character more and now that I think about it, I’m picturing Hawk as one of Cristina’s past anime roles.
Sailor Hawk, anyone? Ham-ura Akemi or Hawk-ura Akemi? *beaten with pool stick* Ow.
OK, who else? Ah, the ever so impressive Erica Mendez as Diane still continues to be that as I thought she was fantastic and Ben Diskin also delivers a fantastic performance as Ban and he also continues to be notable today in his present and future anime roles.
Max Mittleman as King was good, Eric Scott Kimerer was fine as Gowther and the same can be said for Erica Lindbeck (yes, there’s 3 Eric(k)a’s) as Jericho, Carrie Keranen as Guila, Robbie Daymond (aka new Tuxedo Mask) as Gilthunder and Kaiji Tang as Hendrickson.
Overall, the dub was solid.

FINAL VERDICT: Seven Deadly Sins is a fun shonen adventure series that follows familiar territory but it still achieves in being an engaging show with enjoyable characters you want to follow through. It has a good balance of having light-hearted moments with the darker stuff without one overtaking the other. Predictable at times, yes but still pretty damn good.

It would be a sin to give this a bad grade, so I’ll give Seven Deadly Sins….

Yes, I’m not going for the stupid pun of 7. I was at first but the show got better.

As of this time, SEVEN DEADLY SINS has not been licensed for home video release but is currently streaming on NETFLIX.

This has been MAK2.0 aka The Blue Hybrid saying “If I had to choose what anime characters to fight on my side, I choose Diane.”
And I mean that shit.

SEVEN DEADLY SINS – animation by A-1 Pictures / streaming on NETFLIX