So…….many of you knew this was coming. I’ve been saying that I was going to make a review of this and even though I tried hard to avoid it, you just can’t.

And if you read the title of this review, you know what show I’m talking about.

Now let’s get into the plot, shall we?

One year after the SAO incident was resolved, Kazuto Kirigaya is adjusting to a normal life once again as best he can. He thinks all that death is finally behind him, until he is approached with some startling information. In the wildly popular pro shooter MMO Gun Gale Online, an ominous player has shot players in the game, and the same players mysteriously turned up dead in real life. Kazuto feels himself being pulled in as if by the shadow of SAO and agrees to investigate. He must now tread back into the dark world of his past with the help of the troubled, ice-cold sniper Sinon as he searches for the player who only refers to himself as “Death Gun.”

Onto the story……where once again the show blew its action load on the first 14 episodes with the GGO arc but this time we have a 3-episode arc (Excalibur) or basically some filler and a 7-episode arc (Mother’s Rosario) and that part I’ll get to in a bit.

First off, the Gun Gale Arc is basically what I just described in the plot synopsis and you know what else? It’s like a retread of Aincrad with changes in female protagonists and the end result. Its Kirito returning to somewhat familiar ground and well…..let’s see: Kirito being the videogame Jesus that he was in the last series by winning every game with minimal effort and yet this is a shooter game and he uses mostly melee combat and a damn lightsaber like he’s auditioning for Episode VII. His ass would be gone but the plot demands he goes through some impossible obstacles and be the overpowered hero that he is….and that still gets boring by the minute. Oh, and this time, he masquerades as a girl in the game.

Oh, let’s not forget about Sinon, the other main character in the GGO arc and you know what? She’s just another version of Asuna in the Aincrad Arc as in you have a character who is proven herself to be a capable player in the game and a fascinating character at first but then once she and Kirito meet….that potential of hers went downhill. She just becomes another girl in Kirito’s growing harem and the way they handled her PTSD with guns never felt genuinely moving or compelling. In fact, it’s more pitiful than uplifting because throughout her story arc, it never made her into a better or motivating character but someone who always need Kirito to clutch on to and not to mention, the countless ass shots of Sinon was really pointless to add-on when they explain plot exposition or trying to pull a serious moment. It’s mostly there to get your attention since the animators (and writers by extension) think you’re not really that interested in the story.

Plus, there were 2 other arcs following GGO. The Excalibur arc is basically Kirito, his band of merry waifus and Klein go on to a journey to find a holy sword and no, it has nothing to do with that one character from Soul Eater.

And yet, that seems a lot better than this tripe.

However, this was the least terrible arc of the series mainly because it does have more focus on Klein because he’s actually a compelling character to follow and seems more genuinely an awesome person than the protagonist. In fact, I said it before on my first review that no other character aside from Klein and Agil were interesting characters.

Silica is just another girl in the waifu clique and just there for….well, no important reason and Lisbeth is just the side girl who acts in jealousy whenever Kirito and Asuna gets close and of course the sister—no, wait, cousin Suguha or Leafa is there because…

Well, hell if I know, all these girls don’t have much of a character aside from being a part of Kirito’s fawning girls and the worst of them all was Asuna because let’s face it.
She doesn’t have much of a character from being Kirito’s #1 girl and it doesn’t progress any further and that leads us to Mother’s Rosario, the third arc of the second season and I know people said that this was the best part of the series.

I don’t believe that for one second but I will give it some points. 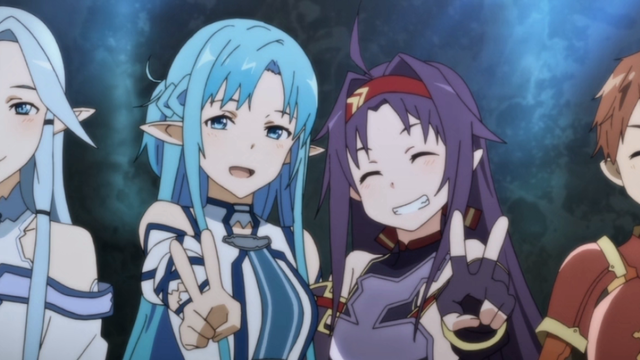 For example, the introduction of Yukki into the show since her and Asuna become good friends with each other as Asuna hangs with this guild called Sleeping Knights to defeat a level boss and that’s quaint and all but as soon as episode 22 debuts, that’s when I knew things were about to get worse from here. I’m not spoiling it but you already know what it is if you see it and we find something about Yuuki. It involves a well-known deadly disease and…..I got no emotional feel from that at all.

Especially since we only knew that character in the span of 3-4 episodes and you expect an emotional rise from that? It would’ve been concrete if we actually had more time to know the character but to pull something like this near the end, that’s just more emotionally manipulative crap to add to this overly wrought drama-fest. This arc could’ve been good but it’s just as bad and hacky as the rest.

Animation-wise, just like before, A-1 Pictures prove that make some of the best animation and mostly artwork of the business with its wide range of colors and fluid scenes, although I think P.A. Works got them beat at this point. While the artwork is pleasant to look at, it does feel like any anime from them starts to look the same, at least with their character designs and as I said before, the action is just front-loaded into the first half while the last few episodes don’t have much going on. In fact, it’s quite dull to look at after a while.

I’m a bit letdown at the music of this since Yuki Kajiura is one of the best composers I heard in music and this is the most generic epic-sounding score I’ve heard in an anime especially with the 1st opening song “Ignite”by Eir Aoi and ending song “Startear” by Luna Haruna, which is a shame because I like both artists but the song does nothing to get me into the series and the same to be said for the 2nd opening “Courage” sung by Asuna’s seiyuu Haruka Tomatsu and ending “No More Time Machine” by LiSA but on a positive note, “Shirushi” by LiSA was decent enough for the arc it was featured in.

Of course, I managed to catch the English dub that aired on Toonami and no surprise, the dub was good. Hell, that’s another positive thing I can say about the show that it has a good English dub from Bang Zoom! As much as I think Sinon wasn’t a good character, I think Michelle Ruff gave a great emotional performance as her and props given to Erica Mendez as Yuuki for her as well. Honestly, I have no problems with the dub; however, I will say this, Bryce Papenbrook has improved as Kirito on his second time back but he can’t do the girl voice as Girl Kirito. He’s still a good VA but that bit of performance wasn’t good.

FINAL VERDICT: Well……do I have to say it as this point? I absolutely hated this show and to me, this is worse than the first series as it’s still evident of bad character writing, horrible pacing, no genuine emotional connection and an arc that could’ve been good but messed it all up at the end. It may have good animation, a great dub and maybe one song I like but it doesn’t excuse itself for all the dumb shit they pulled off.

And as expected, I’m giving this sorry excuse for a show….

Easily one of the worst and insulting shows I’ve ever watched.

SWORD ART ONLINE 2 is available on DVD & Blu-ray via Aniplex of America. Streaming options are available on Crunchyroll, Hulu, Daisuki and has aired on the Toonami block on Adult Swim.

Well, this has been MAK2.0 aka The Blue Hybrid, and…yeah, next review will on something I liked.