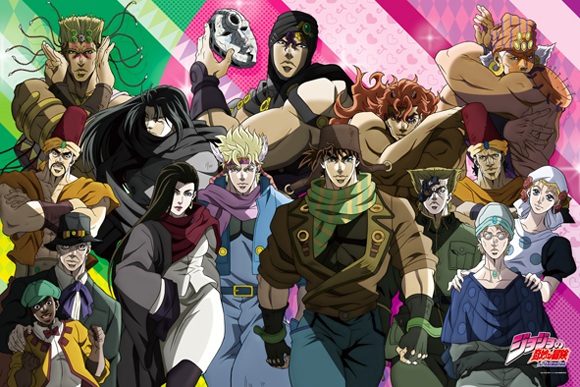 The time skip is a pretty common trope used in shonen series to evolve or power up characters quickly under the whim of the creator. Whether the redesign or retooling is necessary, one thing that can separate Jojo’s Bizarre Adventure from other series in the genre is how the jump in time always creates a brand new, self-contained story. And as Araki continues to work on Jojo’s Bizarre Adventure to this day up to Part 8, we can see that his methods really made an impact on action adventure. So how does Battle Tendency pick up from the dramatic conclusion Phantom Blood? The results will leave you grinning from ear to ear.

Synopsis: Set in 1930s New York City, Joseph Joestar is the rough-and-tumble but clever grandson of Jonathan Joestar. When word gets out that Joseph’s adoptive great uncle, Robert E. O. Speedwagon, has gone missing, Joseph sets out across the world to find him. During his journey, he discovers a set of WWII experiments to revive the “Pillar Men”, a race of supreme beings and the original creators of the stone masks of the Aztecs. To fight this global threat, Joseph heads to Italy in order to learn the ancient fighting art of his grandfather with the help of Caesar Zeppeli and their mysterious mentor, Lisa Lisa.

What gives Battle Tendency more pizzazz and memorable action compared to the original series is the new protagonist, Joseph Joestar. Compared to Jonathan’s kind, gentlemanly nature, Joseph has a cocky, punkish attitude that carries him through life on the streets of New York. He is a never-ending source of entertainment and conflict as his more cowardly, underhanded tactics deviate him from your average protagonist. As Araki tends to create scenarios with gleefully despicable people, Joseph is the right kind of man to follow; someone not above cheating to get through life but still worried about how is grandmother might react to his actions. Veteran voice actor Tomokazu Sugita, whose experience playing characters on both ends on the emotional spectrum, makes Joseph one of the most dynamic characters in recent years thanks to his fantastically spoken dialogue.

As it took me a few episodes to really get into the spirit of Phantom Blood, Battle Tendency grabs me within the first ten minutes by showing Joseph incapacitate some crooked cops with a bottle cap. Because this series is a direct sequel, it can emphasize more on the over-the-top, dangerous nature of the fights while displaying unique characters through their reactions. As Phantom Blood took from Western-influences such as vampires and Highlander, Battle Tendency has a more direct style to pulp comics from the 20s and 30s, with the story itself borrowing a lot from Raiders of the Lost Ark. So many of Araki’s trademarks blend wonderfully within this genre, which is why Battle Tendency stands heads-and-shoulders above its predecessor.

Similar to the comics that inspired the series, the plot can jump from setting to setting but never gets too frenetic in it’s pacing. From New York, to Mexico, to Italy, Joseph retains his charismatic nature and he creates harebrained schemes to get through his dark situations. I particularly liked the development of The Pillar Men throughout the whole series, versus the constant agitation of Dio during all of Phantom Blood. There’s a further level of depth to the villains of Battle Tendency, by making them terrifying before showing how powerful they really are by Episode 6.

What doesn’t quite work for this series is that many of the new themes and ideas introduced become underutilized. The characters Caesar Zeppeli and Lisa Lisa are promoted heavily in much of the merchandising and the introduction of the series, but they don’t stay for very long. In fact, Rudol Stroheim, a Nazi Scientist turned good, has a more prevalent role than any of the other side characters.

As I’ve watched the series progress, I’ve become more aware of Araki’s storytelling pitfalls. Primarily, he likes to give a lot of back story to a character right before her or she possibly dies. He breaks so many of the regular conventions of an action series, but has his own mistakes similar in the way of John Woo or Jackie Chan. Most of the time, the ridiculous nature of Jojo’s works with the fights and emotional scenes, but it makes his story beats overly familiar and predictable. There’s also the consistent problem of the series’ trademark changing color schemes. Half of the time it’s fine, but there are a few fights where Joseph or Kars or Wamuu will have three different sets of clothes for no particular reason.

Jojo’s Bizarre Adventure: Battle Tendency is the natural evolution for this series. Everything you loved about Phantom Blood remains, but with the added panache of the irascible Joseph Joestar. The extension from 9 episodes to 17 works greatly in the series favor, as the expanding plot unfolds nicely for the audience without ever slowly down. We really get a taste of what this series is capable of by giving us these fully fleshed out characters with an engaging story and surprises around every corner. Hirohiko Araki manages to excel with more responsibilities on his plate and that’s the best compliment to give to any fiction writer.

Look forward next week to my reviews for Stardust Crusaders Part 1 & Part 2! There’s still a lot to love about this series, especially with the best ending theme ever!

Jojo’s Bizarre Adventure is currently available on Crunchyroll and is licensed by Warner Bros. (A Chapter from Phantom Blood was available on Free Comic Book Day last month!) The original manga is ongoing, written by Hirohiko Araki and published by Ultra Jump/Viz Media.

For more of Scott’s work, you can find it on the website One of Us.