OK, OK, OK, I know as of the past 5 to 6 years that people are worn out by the vampire effect thanks to Twilight, True Blood, Vampire Diaries and some other knockoffs that are either forgotten or no one gave a shit in the first place but is there still some room for vampire movies or media? Well, technically, there is but I would go for something smaller……..mostly in the B-Movie sense, something that can be in the length of 80 minutes or so and there enters New Blood Rising.

But what is New Blood Rising? It is a 2014 released low-budget vampire horror film released straight-to-DVD from Shattered Images Films, an Ohio-based independent film studio co-owned by Chad Zuver (who also written and directed the movie, among other things) and Allan Meyette.

Jade, her sister Ophelia, and her brother Bryce, are the last three vampires in the world. They come into this small town to figure out a plan to restore their bloodline and raise an army of vampires. Jade says she needs someone with pure and innocent blood to restore balance to the family and for Jade to take over the world. Bryce finds a young girl named Brie, who is exactly what Jade wants. The one thing standing in the way of Jade’s plan, is the group of vampire hunters that just moved in next to Brie’s house. The Hunters are lead by Archer, and is followed by Karver, Riley, and Ash. Their lone goal is to protect Brie from Jade and her siblings and finally put an end to the vampires. 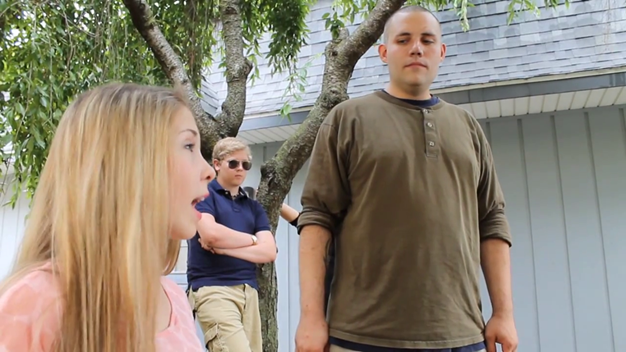 And yes, the film does show its budget but I didn’t find it to be a problem. I know that going into it and for a certain amount, I did enjoy it for the 80 minute length it has and that’s a good thing because it knows when to start and end a story without going too long or feeling too short. As for the story itself, it was fine. The whole finding this girl to raise a new line of vampires is nothing wholly new or original about it but I wasn’t like, “Oh god, this type of fucking story again!?!”….or at least this time it wasn’t like that.

If I had to rank characters in groups, it would be the vampire hunters (Archer, Karver, Riley, and Ash) first, Jade and Ophelia second (yeah, I don’t give a shit about their brother that much) and last is Brie…..yeah, I couldn’t really care about her that much. I know in the movie that she’s the typical teenage girl going through typical teenage girl problems and I get that in the end that shit seems non-existent due to the more interesting plot at hand.

As for the acting all around……it was alright at some parts. Some performances were a bit flat and I don’t find it to be horrible. Some I found good were of Kayla Elizabeth and Vanessa Leonard at the two sisters Jade and Ophelia and Zuver himself was part of the cast as Archer and he was rather good, too. Dana Furlong did fittingly handled the part for Brie, even though she wasn’t my favorite character. Thomas Sloan as Karver was also pretty decent although he was a bit iffy around the middle but he was acceptable in the role he’s in.

FINAL VERDICT: The movie is actually alright to me. Maybe it’s just that it’s because I don’t watch horror movies that much because I can tell what’s going to happen and all that and this is no exception but hey, I didn’t find myself to be bored by it.

So how much did New Blood Rising RISE?

THAT’S IT FOR ME AND UNTIL THEN, THIS IS MAK2.0 aka Blue Hybrid, bringing all the elements in one format.