When it comes to most media in today’s world, the “rule of cool” is often used in either movies, TV, music, books or especially animation. In this special case, anime can have the rule of cool (for instance, Cowboy Bebop, Samurai Champloo), that is, if the show is rightfully done where you can recommend it to every one you know, but you can’t make that your only priority or as most people would just call it something that tried and failed, even if you got high production values.

Yashiro Isana has lived a relatively ordinary, simple life. He lives in the technologically-advanced Shizume City and attends Ashinaka High School, a notable high school that is located on an island just outside the areas. Yashiro is friendly with everyone. Nothing ever seems wrong about him, except perhaps his habit of forgetting where his school-issued PDA is. However, nothing normal has been happening since the recent murder of Tatara Totsuka, prominent member of the infamous HOMRA. No one knows who exactly killed him but the man responsible bears an uncanny, identical appearance to Yashiro. Seeking vengeance, the Red Clansmen of HOMRA set out to get Yashiro and kill him. Everyone suspects that Yashiro is the murderer. Isana Yashiro was not the person who killed Tatara Totsuka but yet another mysterious character is pulling the strings behind the curtains, a person which is quite dangerous and powerful. 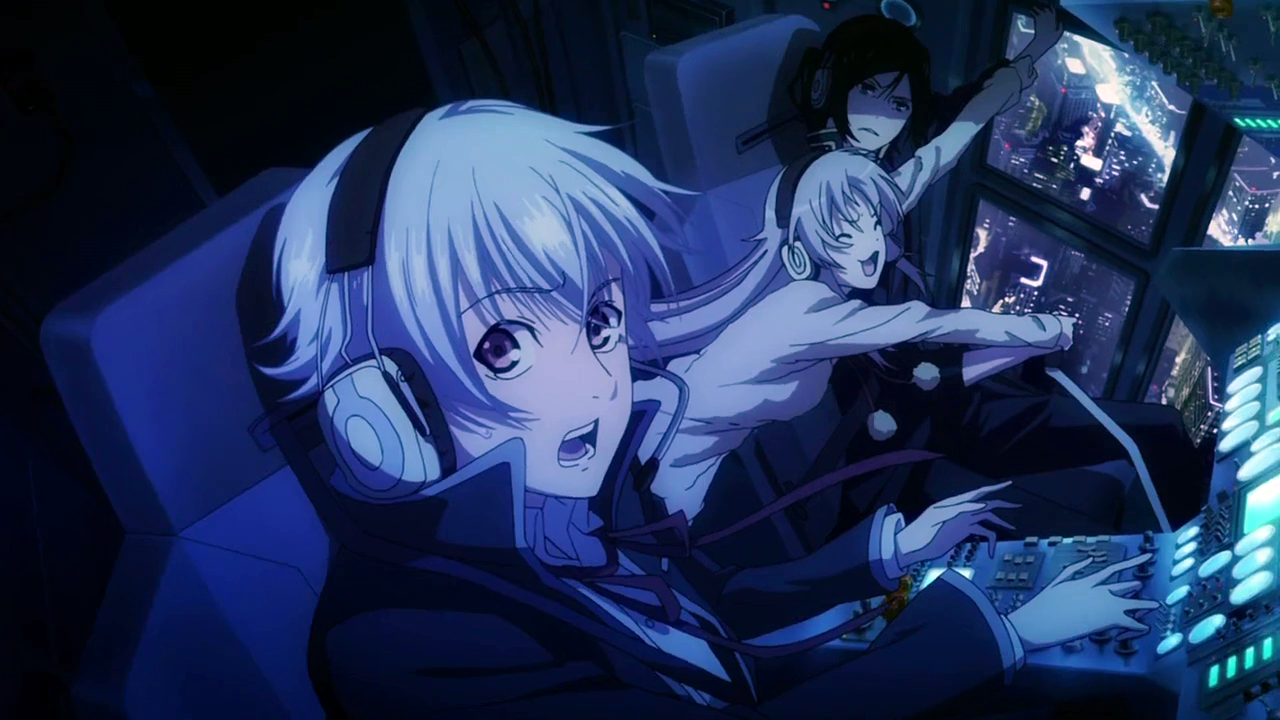 Yeah, I have never been so confused about reviewing an anime, especially one that has a very simple storyline of a high school kid being accused of murdering a well-known clansman from a very dangerous group and for the time being, I actually did like the plotline and I felt like it didn’t feel rushed during that plotline. I didn’t feel like they completely went too quick with that, but I feel like they went too quick about most of the kingdoms and their characters. I felt like we could’ve gotten more stories from the HOMRA group, as most of those characters and their stories did seem interesting, but that phase didn’t last. Scepter 4, I can say less about because it’s mostly 3 members of the group that are more prominent (the others are just members no one gives a shit about) and there’s the fact that one was a former member of HOMRA and has a rivalry with another HOMRA member. I think the biggest problem about the plotline is that there wasn’t enough episodes to fill most info on these characters. Maybe the light novels and manga did that better, but it still doesn’t mean it left me underwhelming.

Let’s start with Shiro, Kuroh, and Neko: Shiro is our main protagonist and he is a trickster for the most part as the show starts and I did felt a little progression when it came to him solving the crime of being framed for murder and he didn’t really get on my nerves. Kuro is the atypical stoic badass with a sword and while most people thought of him as his credibility as one with weaken once he joins Kuro and Neko, to me, he was more of a better character. Yeah, I like my stoic badasses now and then but at least, he does get comedic at a few times and it may seem like breaking character to you, but it’s more of having a personality to me. Neko…..is honestly annoying the whole time, basically she’s very devoted to Shiro and is mostly there for the fan service otaku crowd as she’s a catgirl….not a girl dressed as a cat, a cat that can change into a girl….did I mention she has huge breasts? *gets a slap from random female* Ow.

The HOMRA group is basically some gang archetype characters with some uniqueness in them. Mikoto Suoh aka The Red King is the tough and most powerful leader of the group; Izumo Kusanagi is the one member that keeps everything under control and the level-headed one. Misaka Yata is the passionate, very violent and headstrong member of the team, especially when he really wants to hunt down whoever killed Tatara Totsuka (one of the first members of HOMRA and also the weakest); Rikio Kamamoto as in the blonde-haired guy who wears sunglasses and eats…; and there’s Anna Kushina, the youngest and only female member of the gang…because badasses needs a loli on his side.

Then the Scepter 4 group, as I said, has only 3 members that are more prominent than the rest. Reisi Munakata aka The Blue King is the calm yet elegant character, the polar opposite of The Red King and wants to keep things in order. Seri Awashima is (of course) the lone female member of the group, nicknamed The Heartless Woman (or “Tundra Woman” in the Japanese version) and….well, that’s it. She’s the second-in-command and I found nothing that interesting about her, except that she loves red bean paste so much. However, Saruhiko Fushimi is probably more interesting to me as he was a former member of HOMRA and has a long rivalry with Yata since he left there and he basically didn’t give a shit about leaving them, calling them a childish gang of thugs and gangsters but he seemed more of a regretting asshole of a character throughout.

I could mention the other characters like some of the classmates (Kukuri Yukizome, Shiro’s friend) but they aren’t really that of much importance in the plot, so I’m going to move on.

The animation is quite the visual and shows a lot of their high production value and the art does look gorgeous. The studio behind this is GoHands, and they are relatively a newer studio as the only well-known works I know from them are the Mardock Scramble movies and as of recently, Coppelion, and while it looks beautiful, I wish they tone down some of the blue filter they got. I admit blue is my favorite color (hell, my nickname or my updated nickname is Blue Hybrid) but sometimes it can be irritating at a few times and that also goes to their future projects (i.e. Coppelion).

As for the music, this is one of those times where I like more of the score then the opening and ending themes as they really didn’t feel like they belong in the show. I would say the ending theme to the last episode fits better and this is nothing against the opening theme “KINGS” by Angela as I did like that song, it’s just should’ve been used in a different anime. Now the score does have some appeal as when the first episode began, I was really immersed into the music, preferably to the themes of Mikoto, Yata, and Reisi.

Now for the English dub, which aired on Neon Alley, brought to you by Studiopolis and Viz Media and this is much an all-star cast, despite the show being a non-union dub, and for the most part it is pretty standard in being a good dub. This year, Matthew Mercer still continues to impress me as a voice actor with stuff like Fate/Zero even with schlock with Iron Man: Rise of Technovore, his role as Kuroh was great. Ben Diskin, a voice actor who I first recognize watching Codename: Kids Next Door, has gotten good range over the years and him as Yata is acceptable but the one VA that I really thought was excellent is Todd Haberkorn as Izumo. That smoothness and calm demeanor in his voice made me not even notice he was in the anime and honestly, that move to L.A. has helped in get more diverse roles (with some exception). As for the others, Sam Riegel as Shiro was okay, Patrick Seitz as Reisi is plenty good, Johnny Yong Bosch as Fushimi is what I expected from him. Tara Platt, Carrie Savage, Grant George are well-acted and last while I do not like Neko as a character, I had no problem with Stephanie Sheh voicing her but I will say if I had to choose between her as Kuro in Blue Exorcist or Neko in K, I choose the former. Oh yeah, Lucien Dodge…..another good performance from him being Tatara Totsuka.

FINAL VERDICT: So did I like K? Well, I do to an extent but it’s not exactly I would recommend to most people. Some people may have gotten confused over the entire run and some did get it from the get-go. I’m the in-between guy where I get most of the plot but somehow miss something in the leeway that requires a rewatch (which I did do a few times) and I don’t do that often when reviewing anime. So with K, it’s in the middle of the road for me.

In other words, this show gets the grade of

At the time of this review, K is scheduled to be released on DVD and Blu-Ray Combo Pack in February 2014 by Viz Media (and the box art of it is…..VERY FANCY!!! – in my opinion, of course) and a sequel to the anime series in the form of a film later in 2014. Streaming options are available at VizAnime.com and Hulu while the English dub is currently airing on Neon Alley.

And until then, this is MAK2.0 aka Blue Hybrid, bringing all the Kings (even the colorless King) into one kingdom.

THE MIND OF THE HYBRID ONE – my Tumblr Page