NOTE: Some of the material written here may (or might) contain spoilers from Book 1 of LEGEND OF KORRA, if you don’t want to be spoiled, just watch the series (it’s only 5 hours long, it won’t take you long) and then come back to read this.

Well, folks, it’s been over a year (and 4 months) since the premiere of the first season (or book) of The Legend of Korra and before it, the hype of this was astounding from all of the internet conversation about it, hearing from the official creators about it, especially coming from the hills of that adaptation that shall not be named and more importantly the original series Avatar: The Last Airbender and their comic following the series finale The Promise and The Search.

But before that, I’m going to give some small thoughts about the previous series. This is the most engaging, thrilling, dramatic yet funny, and entertaining Nickelodeon animated series that I’ve watched in a long time and at first, I thought it was going to be a typical Nickelodeon show that’s going to get run down to the ground but the more I watch it, the more I became immersed with the characters, the plot (How will it get resolved? What’s going to happen next? Who will survive?), what’s going on in their minds to what’s happening, the visuals that does resemble the anime art style done in America, to even which most people consider it to be Westernized anime but unfortunately (sort of) that was the last time I watched anything from Nickelodeon as I gave up on that channel as that show finished its course.

Now, in 2013 with “Book 2: Spirits” coming up, I have read or listen to reviews from many people from the Korra talk from former Spill podcast The League of Extra Ordinary Gentlemen, written reviews from Spill member nkWhiteStar, the Avatar/Korra episode of DREAMcast via Planet Tyro, the site I am still running reviews for and while I’ve said I liked Korra, I felt the need to watch it again to get it in my head more and analyze it (plus, it helps that the Nicktoons Network run it multiple times in the week).

Now, all of you know the Avatar series lore of the world separated into four nations (Water Tribes, Air Nomads, Earth Kingdom & Fire Nation) and the focus of bending. Only one person can bend all four and it’s The Avatar. It’s been over 70 years since Aang’s presence and he was since passed away at that time and there emerges a new Avatar in the making by the name of Korra, a 17-year-old Southern Water Tribe girl, who has already mastered water, earth and fire and now she needs to master air, with the help of her teacher Tenzin, Aang’s and Katara’s youngest child among with his wife and offspring (and another one coming at that). However, with that, there is an anti-bending activist movement called the Equalists going on in Republic City but their way of equality isn’t exactly a peaceful way and it pits Korra with possibly the dangerous and formidable foe, Amon, who can take away a bender’s bending…..and yet no other bender besides Aang can do that.

Now, I’m not going to say that it’s perfect but it isn’t all bad considering I didn’t think the first season of the first Avatar series was exactly good but as time goes, it progresses more into a great series. Korra has its ups and its downs, while most of them are subjective, and to me while there are a few downs, the ups don’t disappoint.

For example, some say that the lack of action was downplayed but that was only because the level of urgency of being captured wasn’t that similar for Korra than Aang. Yes, there were people after her but the enemies are more of small-scale villains compared to the villains in Last Airbender. The pro-bending for the earlier episodes did felt like a replacement for any action scenes and the training pieces does seem a little less handled and the last minute tricks especially during the season finale, while they were impressive, it felt rushed to me like the writers had to change something at the last minute…..and who knows, they could’ve. This was supposed to be a miniseries and maybe if it ended like that in the show, I would’ve been good with it. I’m still am but it was got me puzzling. There is also the deal with the love triangle between Korra, Mako (one of the pro-benders Korra befriends) and Asami (Mako’s then-girlfriend) and that ordeal just felt unnecessary and flat, like they could’ve done something totally different with it, but not throwing it away altogether. 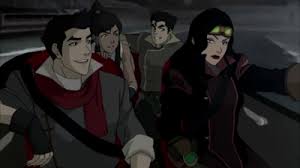 I don’t know if adding Asami into the cast or into the storyline was a good idea in the first place, but I really hate to say it but if that love triangle didn’t happen, she wouldn’t exist in the show at all. I will say that the resolution of it didn’t become distracting to the main plot of the show, although the pro-bending is a bit suspect of that, which leads to Mako and Bolin, the pro-bending brothers. Mako is……well……he can be a bit annoying when it comes to Korra and the whole deal with Asami and pro-bending in general. He has this bad boy image where I can’t even take him that seriously. Bolin, on the other hand, I actually have more sympathy for (especially for one episode that involves the you-know-what). I know most people don’t really like him that much but he isn’t the worst character. His jokes are actually lame but there isn’t anything to hate about him. Tenzin actually takes the spot of having the better jokes and the better built characters of the story, along with the amazing addition of Lin Bei Fong, the daughter of Toph, who had gone through a lot of trauma of her own in the first season. Then there’s Tenzin’s kids…….they are good enough and funny characters although the jokes involving them gets a little old and often immature, even during the more serious moments.

Amon, no doubt, was the most interesting aspect of the show and a force to be reckon with, especially with how can he erase bending from a bender if only the Avatar can do it…..and no, it wasn’t Aang all this time and the thing about him is that…..I actually started to side with him on some episodes considering most of the benders are assholes, especially during the pro-bending episodes where in my opinion, some of them deserve to lose their bending. It may seem harsh to think that but don’t expect me to feel bad for a character when they act like a douche in the first place, even if they’re not as bad as the main antagonist. However, there were a couple of twists that I didn’t expect in the end of the first run from that storyline, especially involving the corrupt politician Tarrlok. 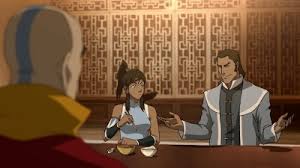 There’s no doubt about the animation here. It is very fluid, striking and very much like The Last Airbender from the action sequences to the bending and the spirit mode animation, I can’t find a notable flaw within the animation here and the fact they take their time with the storyboards and not rushing out of the studio. Music is much inspired by 1920s jazz and swing music and orchestral themes are much akin like the previous ones heard as music in this franchise are always one of the highlights of the show.

Voice acting for the series was excellent as I got some great performances from the cast with Janet Varney as the lead title character, who did played up the rebellious teenage girl role. David Faustino, I did buy into his role as Mako but not as much for P.J. Byrne as Bolin. I’m surprised one of the cast members Seychelle Gabriel was also in that…ahem…..Last Airbender movie and yet she was actually better here, although it’s no contest that anybody could have a better performance than that movie. Special mentions goes to J.K Simmons as Tenzin, the return of Dante Basco (the original voice actor for Zuko) as Iroh (not the one you’re thinking of), Mindy Sterling as Lin Bei Fong and of course, last but definitely not least, Steve Blum, who steals the show as Amon.

FINAL VERDICT: Like I said, the first season is definitely not a perfect one (much like Avatar: The Last Airbender season 1) but it’s still very good and I really urge anyone who’s a fan of animation overall (either western, anime, or whatever) to watch this and if you’re still into this show, I suggest you check out Book 2: Spirits, which has gotten an announce date already: September 13th, 2013……at 7 PM/6 PM C…….and it’s being played in a better timeslot. But I really hope the upcoming season actually improve from the first season.

The Legend of Korra gets the rating of:

(And yes, I’m still rating this as FIRST CLASS……a low FIRST CLASS but still a First Class, nevertheless and I know this isn’t actually an anime review but…..shut up :P)

And once again, this is MAK2.0 aka Blue Hybrid, bringing all the elements in one format.

THE LEGEND OF KORRA – courtesy of Nickelodeon Studios