So, once again, I’m looking into the world of Madhouse / Marvel Anime and to see how the next disappoint—I meant, installment of their comic book counterparts and as you can see by the title description, you know what it is.

Up next in the four-part Marvel Anime project and broadcasts after the Iron Man anime, Wolverine is a mutant, possessing animal-keen senses, enhanced psychical capabilities, three retracting bone claws on each hand and a healing factor that allows him to recover from virtually any wound, disease or toxin at an accelerated rate. Logan learns that his girlfriend Mariko Yashida, who disappeared a year ago, has been taken to Tokyo by her father Shingen Yashida, the head of the Japanese crime syndicate Kuzuryu and a supplier of A.I.M., in order to be wed to Hideki Kurohagi. Wolverine goes on a quest to rescue Mariko and defeat Shingen and Hideki, encountering several opponents along the way.

Once again, I am disappoint, son. 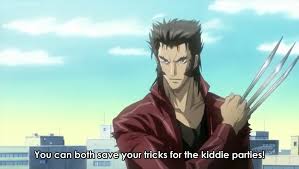 Anyone who knows much about comic books, specifically Marvel comic books that Wolverine is the most notable X-Men character and Marvel character overall, but yet that one time where they made a origin story about him in 2009……yeah, you know how that went and I don’t know much of the other X-Men related animated series or other comics but I hope……I really hope they did a better job on that than in this one.

I really don’t like the story to this….Actually, no; I hated the story to this for two reasons. 1) Its very predictable. You’re not really going to be surprised or in shock of what happen throughout the course of this series. 2) I just couldn’t get into it. As bad as the two other Marvel Anime I watched (Blade, Iron Man), at least I somewhat got interested in them, no matter how generic is it and not only is this plot generic, it fails at being even the slight watchable. The romantic angle between Logan and Mariko is so minimal, it’s a leech. Mariko is the basic mopey damsel-in-distress who waits to be rescued by Wolverine and she’s forced to be married by this guy Hideki Kurohagi, who’s the basic bad guy who may seem like a threat but you know he’s a little cowardly bitch who lets his minions to the dirty work for him.

Characters are no better here: Wolverine is the basic badass that everyone wants him to be; there’s a female accomplice of his whom has a mysterious past that I’m sure not to care about; Side characters are there to serve some purpose until they eventually die (Yeah, I’m noticing a pattern in these shows. I don’t mind them but them just come out as unnecessary and played for sympathy points) and villains are played out as uninteresting and lame.

The animation…..I want to say Madhouse did well but this is an exception. Some of the action scenes were not very well animated. It looked very cheap with them using still images for explosions and shaking the picture. Wolverine’s design is very bi-shounen and pretty boyish, which I don’t think represent him well. I won’t be the final judge but I’m not buying the look of this.

The music is pretty uninspired with the same rock theme that thinks it’s cool because it is and the ending theme with many mood swings shows that like the show, I don’t even think they were trying to make this interesting. The English dub, handled by Studiopolis, is ‘meh’ but serviceable. The role of Wolverine is this is played by Milo Ventigimilia and he really didn’t do it for me. I didn’t feel much of a presence from him (and no, I’m not comparing him to you-know-who) and it’s just rather bored. Other performances from veterans VA’s like Kate Higgins, Crispin Freeman, Stephanie Sheh, & Vic Mignogna felt wasted here.

FINAL VERDICT: So far, this is the worse Marvel-Madhouse anime adaptation I’ve seen and I haven’t even seen the X-Men anime yet (I still am, I’m not backing out of that.) It’s basically everything I feared what the Blade and Iron Man anime would be. I’m just going to end it here and say I really do not recommend this title, even if you’re curious about it. You can watch it if it helps you sleep.

But what cut did Wolverine get for his anime adaptation?

And until then, this is MAK2.0 aka The Hybrid, bringing all the elements in one format.