Part two of the Key/KyoAni collaborated trilogy continues their moe fan service that drives many male otaku insane for some reason and the emotional rollercoaster anime, only this time there is a few changes from the last series. For one, it’s longer than 12 episodes and while it may not be as different from the other Key/KyoAni shows, it’s……something that going to be explained once we get into the review.

Teen-aged Yuichi used to visit his aunt and cousin Nayuki all the time as a kid, but it has been seven years and his memory of that time has faded. Now he has come to live with them to finish out his high school career beginning with the winter semester, and winds up in his cousin’s class. During his first few days in town he (literally) runs into Ayu, a small girl with a winged backpack that, after some prompting, he eventually remembers he used to know, and starts hanging out with her. An encounter with an amnesiac girl named Makoto, who can only remember that she has a grudge against Yuichi, results in Makoto coming to live at his aunt’s house, and he also meets an assortment of other girls, including Nayuki’s friend and classmate Kaori, the mysteriously truant Shiori, and upperclassmen Sayuri and Mai. As pleasant as things are, though, mysteries abound. What happened to Makoto’s memory? Why can’t he remember more? And what other secrets lurk in this town?

OK, I got to know, most of the time so many things happen in this show with so many storylines, often end quickly (very quickly) or get back seated until the end of the series but other than that, there was a change of pace in this type of show. Usually, one of the female characters suffer from amnesia, not knowing their past and it gets retreaded throughout but this time, the main male character Yuichi is the one to have that. I don’t know what other Key/KyoAni show does that but it’s something fresh. It also has that formula to really make you either sad or it wants you to cry (very hard) when you hear the side stories of someone that got sick from……..well, something (They will never mention what sickness they got. Possibly the convenience sickness) and/or some other very tragic heartbreaking story and most of the time, I was immersed in some of those parts but mostly the lighter side of the anime; the antics that makes it seem less overly dramatic but genuinely funny.

Speaking of being genuinely funny, the main character Yuichi is actually one of my favorite characters on the show; he’s the type of guy that can work his sarcasm in being funny without trying to, can be jokey without being a douchebag, and also someone I gave a damn about, but unfortunately I can say the less for the female characters or the half-harem section of the characters. They aren’t very strong character types with the standards of it being the sweet one, sickly one, H.M.G.I.C. (Head Moe Girl in Charge), tsundere, etc. it’s your basic anime traits in female characters just like in the last entry, only they’re slightly noticeable.

The animation is a better effort from Kyoto Animation here than in Air, as it did felt livelier and very vibrant. The character designs are still the same as their other Key efforts with the big-eyed moe girls and the older characters looking the same age as the girls and even the main girl Ayu appears to be a small child but she’s actually 17. Yeah, I’ll say they don’t want to age their characters when they should have. The music is pure Key signature, meaning that it does sound like it’s from a visual novel and yes, I know this is based on a visual novel but I wish it didn’t always sound like that. I thought of the opening theme as soft and quiet building up every time it plays and it matches the tone of the show to a tee. 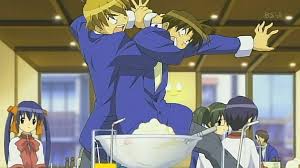 I watched the English dub of this by ADV Films (although FUNimation took over N.A. distribution rights) and while people say that it isn’t very moe like the Japanese version, it’s actually subjective to say that. I would’ve been annoyed if I watched it in the Japanese as I’m glad that the English dub didn’t try to go that route (plus, the actresses did sound annoyingly cute in their own way). Noted performances include Chris Patton as Yuichi, a relatively then-unknown Britney Karbowski as Ayu, and Jessica Boone as Nayuki.

FINAL VERDICT: Honestly, after watching this, I prefer this show to Air in terms of them being actually longer so the story didn’t go too fast, but I did felt like I gotten lost watching some of the episodes in plot and the sappiness and sadness were played in for dramatics. Like Air, I would say you should stream before you even think of buying the show.

So how does Kanon play well into here?