Well, once again, I have fallen into the gender-bending trap but this time, it was Kai (the character I created) that unintentionally fooled them into reviewing it. To hear more of this, read Angel’s review with the storyline that her and I wrote.

So………this is the second time I ever watched a gender-bender anime of what if a guy can change into a girl and how his friends and family would react to it. Well, on the one hand, I really did like Ranma ½ but the only one people would ever referenced because it’s one of those prime anime that you might to check out. The one I’m about to review is not of one of those prime anime but it’s something alright…..it’s something that you used to piss people off (Kai: “I SAID I WAS SORRY, OKAY? I never saw the series as whole.” MAK: “Well, the whole thing is on you since YOU wanted me to review it”). 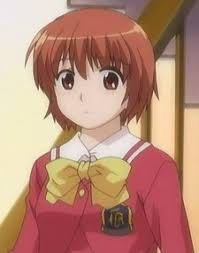 Hazumu was a shy boy who enjoyed gardening, collecting herbs, and long walks in the mountains. One day he finally worked up the courage to confess his love to Yasuna, but she rejected him. Feeling dejected, he wandered up Mt. Kashimayama to the place where they first met to reconsider his feelings. After getting lost, he wished upon a shooting star which turned out to actually be a crashing alien spaceship. Although he was hit by the falling ship, Hazumu survived the crash thanks to some body reconstruction by the aliens, only they got it a little wrong. Now that he is a she, Hazumu stumble head-first back into his social life and relationships only to find that the entire landscape has changed.

Yeah, the execution of this is pretty awful once you watched some of the series midway, I mean, I thought some of the characterization was a bit mediocre with Hazumu trying to act more like a “guy” but most people keep berating him that he’s more like a girl and hence he’s turned into one and he, she, “schim”, whoever actually acts like nothing has changed at all. OK, I like that Hazumu doesn’t overreact much although he/she should but for the rest of his/her family and friends, it’s going to feel pretty awkward and also creepy, starting with Hazumu’s parents, who are the textbook definition of overly dramatic in the first episode and then when Hazumu is a girl, his dad now wants to take pictures of her either bathing, in some fetish-y pose, and it just screams creepy to me. I mean, even creepier than Dance in the Vampire Bund (MAK: “yeah, I watched that but never finished it.” Kai: *moves slightly away from him* “Oi.” MAK: “Hey….it’s not like I forced myself to watch it.”) 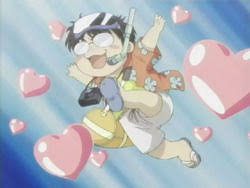 Then there’s the love triangle or rectangle or square or……yeah, once Hazumu’s a girl, everyone wants a piece of her. Starting with Yasuna, the girl that boy Hazumu has a crush on but she rejected him when he had the courage to ask her out and then he changed into a female, making her feel guilty about it and then there’s Tomari, Hazumu’s best friend since childhood who often does the berating of him not being much of a guy and now that’s he’s a girl, the awkwardness kicks in and she starts to fall for her and drama ensues. There is the subplot of his best friend Asuta, who now feels weird since Hazumu’s a girl and he definitely wants to bone her/him and yeah…..I don’t know what to say to that. There’s also the “clone” who looks nothing like her, her dad, and the stupid fucking teacher who keeps saying she’s single and 35 years old. (Kai: “WE GET IT!! YOU’RE OLD AND YOU WANT A BOYFRIEND!! Shouting it to the heavens isn’t going to do shit for ya, lady!!!!”  MAK: Well, didn’t you know that in the first place? You did watch it—Kai: “STOP BRINGING IT UP, OKAY!!”)

The animation by Studio Hibari is pretty dull and I know most of it is fan service based and I did notice some of it involves around Hazumu and his/her/it and their body, although I can give credit to the background art, since JC Staff had a part of doing that. Like the animation, the music never really stands out for me. It’s quiet and dainty and all but it never really felt like I was enhanced to it; it’s just there to set the mood to the show.

And the Dub………Oi, it is a Media Blasters dub done by the same ADR production company (Arvintel Media Productions) who worked on Eiken and Kanokon, in other words, it is a shit dub with bad writing and way too much overacting. Why? Why? Why does Stephanie Sheh have to be a part of this? She voices Hazumu and yes, for both genders and her voicing a male is almost the exact same thing as a female character. Then there’s Mona Marshall, who voices Tomari, and once again, the way she voices her characters does annoy me to an extent. Maybe it’s the fact I watched her in Kanokon and how extremely annoyed I was with her voice acting but in here, it’s still there but not as much. 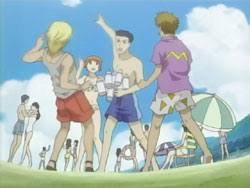 FINAL VERDICT: Yeah…..don’t watch this. You will regret it for the sub-half of your life if you do. Hell, not even the Yuri factor got me enthused about this and if you show it to others and after they watched it, they want to slap you for mentioning it to them.

In other words, this is some straight up…..

Yeah, this gets that grade and it deserves it.