Well, it’s that time again. Remember how I used the subject of Deadman Wonderland and Toonami for (Hy)Lights? Guess what, I’m doing it again with this time, an anime that was requested (or that I dared myself) to review because one of the Spillos that I know here really hated this anime and considering that the topic of today happens to be on my Anime Discovery review list. I would have scheduled it to be the next entry of AD but I’m saving that for Fate/Stay Night: Unlimited Blade Works…..review coming soon by the way. So let’s get this out of the way? Is Fractale all that bad or is the hate unjustified?

In a far distant future, humanity has embraced the Fractale system as the ultimate path towards utopia. Comprised of several trillion networked computers, Fractale was created in the 22nd century to promote a peaceful lifestyle for the entire world in exchange of a periodic recovery of personal data from individuals through terminals located within their bodies. Living in a rocky coast region, Clain is a young boy fascinated by old technology. After helping a girl named Phryne, she gives him a pendant before disappearing by the next morning. Accessing the data from the peculiar gift, Clain ends up summoning a girl-shaped avatar named Nessa. Together they start a journey as they discover the truth behind the Fractale system.

About the production staff behind the show (and I don’t talk much about the production team that much in my reviews, aside from the animation studio), oddly enough it was directed by Yutaka Yamamoto and why it is odd? He’s the director of The Melancholy of Haruhi Suzumiya, both the original and the 2009 renewal series, not that he can branch outside of those types of show but it felt like he wanted to really make an impactful show or at least one with the budget they got since it only lasts 11 episodes, especially airing on the infamous noitaminA block since that is like the big time over there in Japan.

Now with the show, it has a lot of many mixed similarities to any Studio Ghibli/Hayao Miyazaki movie or the series Last Exile.  I can’t speak for the latter since I haven’t seen it yet but I sense a lot of Ghibli from the art to the characters, settings, and designs that might be unique at first, unless you’re an old school anime fan. The problem with this series is that it’s not engaging or overwhelming dull and feels more like a chore to go through than a breeze, even if it’s 11 episodes. I figure on the first episode, the show was going to be very low key with this boy and his strange tulip-shaped/water-cooler parents although that gets forgotten fast and they went ahead with the utopian/dystopian type of anime where technology is evil as sin and it needs to be stopped and the minute I keep bringing up keywords to the plot of this, the more I thought it would look interesting but I just ended up disappointed.

Characters is way below average to an extent with the main character, Clain, who did capture an interest of me considering he likes to explore older technology from the 21st century and he felt like a character that I actually give a damn about but on the other hand, when it comes to his interaction with the rest of the characters, he can be a real pushover and an easy target to a certain character, I will mention later and his character development for the series’ length was typical, so I expected nothing surprising about him. Phryne, the female counterpart to Clain, is a rogue priestess escaping from her captives is the one-note character of her not being “human” to most things such as her abruptly changing clothes in front of Clain and everybody else. I thought she would get more developed into the series rather than Nessa, the doppel character who at first, I thought she was really annoying to deal with her saying, “Those who dislike Nessa can’t touch Nessa” and other quotes similar to that where more like WTF. But hopefully, she was more childlike and only the second most annoying character in the show.  Now there is a band of rebel fighters called The Lost Millennium, fighting against the Fractale system and there is really nothing special about this group or its members as they do like any other rebel group, terrorize anything associated with the Fractale system and nothing else and one last character to mention is Enri, who I really thought was the most annoying character due to her sheer loudness, bratty attitude, and she manages to bring an anime trope that I hate a lot……the whole “Clain’s a pervert” joke, where Clain is shown up with either Phryne and/or Nessa and Enri assumes the worst. 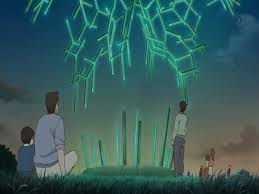 For animation, A-1 Pictures often associated themselves with anime that aren’t original but they can still enjoyable (Blue Exorcist) but this is not one of those times. It’s mostly average-looking with them attempting to copy and paste Studio Ghibli’s style and it gets tiring to keep up with the visuals and the plain Jane art style. Music is definitely no better as I don’t think I even heard as much in there or at least, notice some BGM that stand out and the opening music is nice the animation sequence is just, “Show us some pretty colors!! Be amazed, dammit!!!” and the ending music are very, very quiet and minimal. 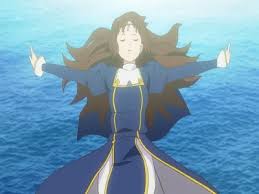 The FUNimation dub does handle the script decently; I just wish the script they were adapting from was better.  Brina Palencia and Caitlin Glass, playing the leads of Clain and Phryne, respectively, were OK in their roles considering Palencia does have vocal ranges regarding her resume in anime and Glass…..Well, I don’t recognize her in a lot of roles (aside from Baccano!) but she’s OK here. Luci Christian also play her part well as Nessa but as for Monica Rial……she gets into her high screechy type-cast role and it is not good to hear as it just irritate me the whole way.

FINAL VERDICT: I want to say that Fractale was the worst show I watched but that’s just saying too much. This is just a dull anime with everything being unfulfilling with characters, story, animation, all of the above. I could rate it lower but there are much worse shows than this and I get some of the hate for this but it’s nothing worth tearing your hair out.

So, what does FUCKIN’ Fractale get?

FRACTALE – animation by A-1 PICTURES / distributed by FUNiMATION ENTERTAINMENT