As MAK was getting ready to finish Dice and Cain once and for all, his mother and sisters walked in on him but MAK was unaware of this point and so, he beat Dice with the chains and threw him out of the window and as for Rick, he was about to be next but suddenly MAK spotted his family watching him doing these things and Rick was going to knock him out but his mother warned him in time and used an old stereo to knock him down. “Son, what in the hell is going on? Why are you glowing blue everywhere?” His concerned mother began asking him these questions even the ones involving drugs, but MAK assured her that he’s not a crack head but he did tell her the whole story about being chased by some guys and a truck crashed with this blue mist letting out and how he never told her about this for the last 2 years. His mom was very furious and disappointed at him for never telling her all about this and MAK tried to calm her down and she tried to leave for her sight but MAK then pull the teleport trick on her but she wasn’t having it. She also called the cops to have Dice and Cain arrested…..again but it seems like for MAK, this would have been more of a victory for him but it feels bittersweet at the end. As he went to bed that night, he ponders and ponder of how this is going to affect him for the long time being.

I have heard of this series being compared to Neon Genesis Evangelion as its counterpart or rival, although I also see it as being a starter or growing plan of other BONES’ series such as Eureka Seven & Xam’d Last Memories and also that RahXephon has its share of being close to the aforementioned series but it is far from that to what I watched. There is also the fact that the director of the series Yutaka Izubuchi has worked with Hideaki Anno on a few projects together and he helped with the design drafts of the EVA units.

In a world where time passes at a crawl and the blood of your neighbor runs blue, 17 year old high school student Ayato Kamina goes about his daily life within Tokyo Jupiter oblivious to the world around him, having been educated with the fact that the all civilization but Tokyo has been destroyed. But all that changes when the mysterious civilization “MU” invades his home, raining destruction down from the sky in the form of strange monsters called Dolems. The events that occur next will lead Ayato to the mysterious woman named Reika Mishima, to the truth of their existence, the discovery of what and who he is, and to the powerful angelic robot RahXephon.

Like I said, the plot, premise, and even the characters is almost similar to EVA although it manages to not mess up or try to make it sound artsy or too pretentious whenever they run out of story ideas, albeit EVA was more of a parody/psychological breakdown of the genre. There is the plotline of being in a war using giant mechas piloted by teenagers to battle with and also the utopian/dystopian element where Kamina discovers that the world he’s been in for so long is not what it seems, with the “humans” in Tokyo Jupiter bleeding blue blood instead of red. Maybe the story isn’t as original and being like NGE, but it is a straight-up mecha anime story that is actually played off well and something that I saw myself liking, much like watching Eureka Seven for the first time. 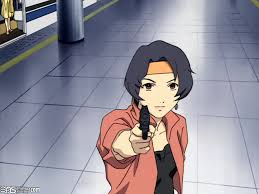 The characters are ranges from being well-developed and semi-interesting, although I will say once again, the character traits have an EVA feel to this, but I’m proud to say that the main character Kamina Ayato is not a Shinji Ikari as you do feel for him when he discovers his whole world is a lie and how would you react, plus it helps that he isn’t a whiner most of the time. I will say that Haruka Shitow is exactly like Misato Katsuragi for being the older motherly figure to Kamina but has some problems of her own, too, and there’s her sister Megumi, which I would say have some similar features to Asuka, but thankfully, not that much as she gotten to be less annoying and more relatable throughout the series. I really can’t tell who the Rei Ayanami of this show is basically either Reika Mishima or Kuon “Quon” Kisaragi as both happened to be silent and stoic figures of the show. There are also Kamina’s friends at Tokyo Jupiter Hiroko Asahina and Mamoru Torigai, who are also more messed up than him ever since he left as one of them discovers the truth for them and that one of them is quite a prick (Try and guess who I am talking about).

The animation by BONES is now quite dated with its’ character and mecha designs, being made in the early 2000s, 5 years after EVA, and for what it was, it had great animation for the time being with the art style and colors being muted. Musically, it was rather good to an extent; the background music can get a bit repetitive but sometimes I don’t even notice it that much but I really do love the opening theme for show, “Hemisphere” which was produced by Yoko Kanno but sadly, that’s the only thing she handled in the music department and the ending theme was very silent-sounding and docile but I happened to think it somewhat fits well into the show.

The ADV Films dub was actually an okay dub with some overacting in some parts. I really did like Chris Patton’s performance as Kamina Ayato and I can see why the guy is a great voice actor as he played someone that would act realistic in a situation of crazy proportions. I’ll say Monica Rial was good in her role as Haruka but whenever it’s her cue to react or scream at something, it pierces into overacting a little and yes, I will mention that Vic Mignogna is also a part of the dub and he was an alright addition as capturing the prick nature in Mamoru.

FINAL VERDICT: All-in-all, Rahxephon is something that I would watch and actually recommend over Neon Genesis Evangelion as this actually goes into that territory without having to stoop into being overly pretentious although Rahxephon is guilty of being like that sometimes.

So, what does RahXephon get in the end?

Later in the morning.

MAK called his mother and sister in the kitchen for a meeting about last night and it started with MAK saying that he really should’ve told them about the Blue Leaf and its developing powers plus that he trained for the last 2 years of controlling and defending me with them. The mom highly questions him having these powers, saying that he doesn’t know about the dangers of Blue Leaf, which she describes is like the effects of marijuana and cocaine combined into one but MAK then started to say that it is nothing like cocaine since there has been no reported deaths of the usage of it and there’s nothing addictive about it. His sister then said, “What makes you think that?” MAK retorted with, “Because I always research the stuff and he is assured of everything he did was safe and practical. “You know, you think just because I’m the youngest doesn’t mean I don’t know what the hell I’m doing!” Then he and his sister kept arguing over this but his mom had to break it up. “Look, we’re trying to warn you to not fool around with this stuff but you seem to be hard-headed.” But MAK really started to get angry and yelled at her, “DOES IT OCCUR TO YOU THAT I KNOW THIS STUFF ALREADY? AND YOU…..THINKING I DON’T KNOW ANYTHING WHILE YOU ARE SO CLUELESS ABOUT THIS, THINKING YOU’RE THE BETTER ONE THAN ME. WHY DO YOU ALWAYS THINK THAT ABOUT ME?” Following that sudden outburst, MAK was slapped by his mother, saying that don’t you ever talk to her like that again but MAK didn’t listen to her and said, “You got a lot to learn about talking to people in a specific way.” After that, MAK walked out of the door and then just disappeared into the rooftops and as MAK ran away from his home, there is some tears streaming down on his face, thinking he shouldn’t talk to her like that but he have been keeping those thoughts inside him, driving him insane. But when comes to nightfall, MAK decided that he is going to move out of his mother’s house in order to pursue his own journey…thus becoming “The Hybrid”.

Well, we are down to the final chapter of DEM LOVELY BONES. How will the Hybrid will his life now? And also, we will go back into the world of RahXephon differently, that is…… 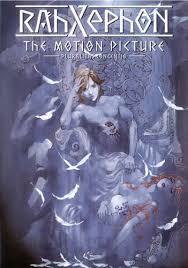 And until then, TO BE CONCLUDED.