Next up is the one with the pistol and as he walks to find MAK, he heard the sudden swipe of a switchblade and thought his boy finally gotten to MAK but when he went to find out, the dead body laying down was one of his own and man, was he pissed. “Dammit! Cain.” Cain answered the call, “Yeah? You got him?” “Uh, no, but he got us.” Dice ended up being more pissed, “Look! You motherfuckers don’t come out until you caught and/or kill his ass. You got me?” Then Cain looked threatened and took the phone from Dice, “Whoa, Whoa, Whoa, little brother. Slow down. I got this shit here. Just find MAK, subdue him and bring him out here.” The order has given out and the shooter has hunting all over for MAK and soon he was spotted and shooter fired away at him and then MAK showcased his technique of using teleportation to avoid bullets. MAK then got behind him and snatch his gun and tried to break his hand but MAK was knocked out and stomped by him and was avoiding getting stomped in the nuts. He soon got back his gun and it looks like MAK had nowhere left to run and just as he was cornered, the shooter was getting ready to fire and he said, “Got any last words, you big motherfucker?” MAK responded with a “Yes.” And it was followed by a “Heads up!” What MAK meant was a trap of switchblades was aiming at the shooter and came headfirst at his face, killing him instantly; however, it didn’t stop him from shooting MAK as a fired bullet went into MAK’s shoulder and leg and he fell down from the 3rd story window and he thought of transporting out of there into his home but he didn’t want them to know where he lives but it was too late to do it as one of the crew got his body and drag him out of there.

Now, here’s a thing that I never noticed in most recent anime before and that is called the Movie Series……now this is definitely different from the term “OVA” as in movie series are released theatrically while OVAs are direct-to-video. Many examples of anime movie series include Kara No Kyōukai (or The Garden of Sinners), Broken Blade & Mobile Suit Gundam UC Unicorn. The film series is directed by Umanosuke Iida, known for directing anime such as Devilman, Vandread, Hellsing (the original one), Mobile Suit Gundan: The 08th MS Team & Shangri-La. Unfortunately, before the movies were released, he passed away of lung cancer at the age of 49 in 2010, and that’s the same year that Satoshi Kon passed away from pancreatic cancer..…..OK, let’s just get to the review.

In a futuristic Tokyo, unique human beings who have awakened distinct powers are being hunted by a secret organization named Custos. Known as “Attractors”, these exceptional humans are joining forces to defend themselves. They are led by a boy named Quon, an idealist who is determined to save all the Attractors he can.

Now here’s the thing about these films: They are quite reminiscent of the dark superhero genre and mostly the X-Men franchise, which are the majority of which they are parallel to, such as, ordinary people who have these powers that they can’t control, which have affected their past and scarred them for life and they are being taken in a facility, much like Professor Xavier’s School for Gifted Youngsters to an extent and like that, they are being hunted down by a secret organization that wants to do them in. Yeah, this idea isn’t exactly wholly original but it’s an interesting concept and premise and I can say for that reason alone, it works on paper and it does work on the big screen.

As for the characters, they are actually very stock characters with hit or miss qualities about them with having powers that can cause consequences and mostly regret. The main character, Quon, who has lived over a millennia, from witnessing his family being slaughtered and wanting vengeance ever since. Now I say Quon was some similarities to Wolverine but here’s the difference between them….Wolverine has more charisma and personality than Quon as that character seems unmotivated most of the time but he is not the all-mighty God-mode being that most people would suspect as he gets his ass kicked a lot in fights but he does manage to heal himself after.  There’s Yuri, the flirty but competent attractor whose powers aren’t exactly developed but can maintain it; Kiri, the innocent young girl whose gift is her voice and with it, she can only use it to heal or to destroy and I got to admit, that trait is close to being the character Rogue. Tei is the telepathic woman who can communicate with others from many distances but can relive painful memories of the past. Miu is the young girl that can communicate to animals but her limiter enables her to speak normally and also the animal’s language. Takao is the smart-alecky, lazy, but complacent attractor who talks shit sometimes but not so much to be an asshole.  Yuma is the boy whose power is to erupt colored orbs from his body whenever he’s upset or angry and the antagonist Genji Kamishiro is the class-A comic book-style villain who wants to control all the Attractors and to gain order……so, yeah, he’s the typical villain and last but not least Towa is Quon’s younger brother, who is believed that whoever contacts him will have their powers increased.

As for the animation, I can safely say that BONES did an excellent job on this, especially the fighting animation where it feels so fast-paced and often gritty sometimes and that goes to the art style of the show, too, especially with some scenes that would be gruesome for younger eyes. The main theme for the show called “Reckless” by LAZY is somewhat thrilling and yet unintentionally funny for every time I hear, “Feel Rock Emotion, Burning Rock Emotion” because I know they use Engrish in some of the lyrics, but it still feel silly once you heard it so many times. 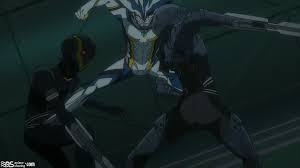 For the dub by Sentai Filmworks, I can see why I said that Quon had no charisma and that’s thanks to Corey Hartzog and his lackluster performance as Quon sounds too chill, even in a tense situation, but I will say that, I’m pleased with the rest of their performances including Jessica Boone as Yuri, Emily Neves as Kiri & Monica Rial as Tei.

FINAL VERDICT: After seeing some lackluster titles from BONES (No.6, Ghost Slayers Ayashi), this is an improvement and the kind of quality that BONES should have put in most of their shows. It’s a concept that seems foreign to Japan but if handled well, it can turn to be pretty impressive. I could easily recommend this to people who are akin to any Marvel comic character.

In other words, FEEL RATING EMOTION cause Towanoquon gets…..

As MAK woke up from his fall, he took a look around his surroundings and figure out someone must’ve drag him home in his bed safe and sound but as he tried to get up, he is chained to his bed from head to toe and the worst has yet to come for him as both Dice and Cain entered the room. “You damn bastards! What the hell did you do to my family?” MAK questioned them. Both of them said “Don’t worry about them. They’re not home and as far as you should be concerned, they shouldn’t be on your mind right now.” And then Cain began to wail on MAK while he’s defenseless and Dice used a lighter to lightly burn his fingertips while duct taping MAK’s mouth. “Now we going to find out more about that power of yours, boy. You can’t hide this shit forever.” MAK then said something about that but it couldn’t be made out due to being duct taped. So both of them decided to strip MAK’s clothes to find out and when they did, a blue aura began to appear as his body glows blue around him and then Dice joked around and said, “Wow, this must be one serious case of blue balls if you ask me. He must be a virgin then.” Then both of them laughed and laughed at MAK and how much of a loner he is, although it wasn’t a new thing to him. MAK was more of the loner type ever since he entered high school. Sure, he had a good substantial amount of friends but lives his life with a lone wolf plus he wasn’t really that lucky with the ladies either and all of that torment and laughter just reminds MAK of why he is like this and his pure hatred for the world and as he felt more angry than before, he tries to loosing himself from the chains when he slowly pulled the chains without them noticing and then he pulls the chain and used it to beat the hell out of Dice, “YOU FUCKING ASSHOLE!! SON OF A BITCH COCKSUCKER!! You fuckers are the reason what I’m like this.” Soon, Cain began shooting as him but MAK took his gun and destroyed it with his bare hands and then as he was about to throw them out, let’s just say the truth finally comes out.

Did MAK get found out of his powers? If so, how will he face this? Tune in next time to see what happens and for the next anime, let’s just say that it’s a distant cousin to a certain anime we all know and……..well, here’s a clip.

And until then, TO BE CONTINUED.